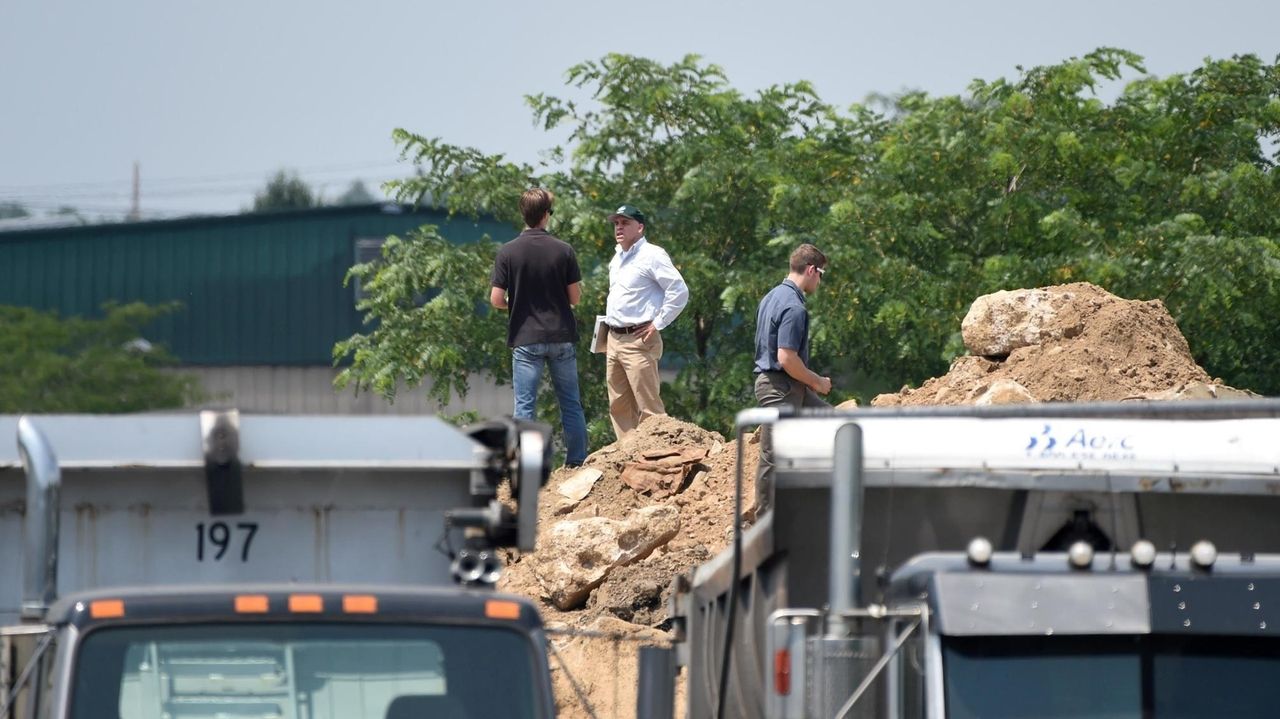 Officers with the state Department of Environmental Conservation searched a Bay Shore facility on Thursday, July 20, 2017, in a broader investigation into illegal dumping statewide. "This is just one phase of a very large investigation," DEC Police Lt. Jesse Paluch said at the scene. Credit: James Carbone

Officers with the state Department of Environmental Conservation executed a search warrant at a Bay Shore facility Thursday in a broader investigation involving illegal dumping statewide.

DEC officers arrived at the 1600 Harrison Ave. facility in Islip Town about 11 a.m. and were seen inspecting truck trailers, a large shed and what appeared to be an office. They also examined a large mound of dirt and debris.

“This is just one phase of a very large investigation,” DEC Police Lt. Jesse Paluch said at the scene.

The search warrant was approved by the Suffolk County district attorney’s office and covers all of the companies listed at the Harrison Avenue address, Paluch said.

Several businesses have been listed as operating out of the site, including a paving and construction firm, a general contractor, hauling companies and a landscaping business. Attempts to contact the businesses at that address were unsuccessful.

DEC officials declined to comment more specifically on the case because it is an active investigation.

“We rely on tips from the public as well as information from our own staff to bolster that information,” Seggos said.

The Bay Shore facility has been on the state agency’s radar.

The DEC in June charged four drivers with illegal dumping after officers witnessed waste being dumped in the Ulster County hamlet of Kerhonkson. Two of the drivers charged had waste material that had come from the 1600 Harrison Ave. site and two others had illegal debris from an outdoor New York Police Department shooting range, according to the Times Herald-Record, which cited court documents.

In May, the DEC said it was investigating possible illegal dumping sites or operations in Bay Shore, Cutchogue and Holtsville after receiving an anonymous tip by email. That tip also mentioned 1600 Harrison Ave., according to the email, which was sent to local politicians and media outlets as well.

Robert Clifford, spokesman for Suffolk County District Attorney Thomas Spota, said he could not confirm anything involving a criminal investigation.

The DEC has intensified efforts to curb illegal dumping statewide after a number of high-profile cases, including one in 2014 at Roberto Clemente Park in Brentwood where nearly 40,000 tons of construction and demolition debris was discovered.

Over two days in February, DEC officers and police on Long Island and in the Hudson Valley and New York City located nine illegal dumping sites and issued nearly 200 tickets for unlawful disposal, operating without a permit and other violations as part of an effort to combat dumping of construction and demolition debris.

The state is in the midst of revising its regulations for solid waste facilities. Among the proposals is “cradle to grave” tracking of construction and demolition debris generated in New York City and fill from other parts of the state, DEC spokesman Sean Mahar said Thursday in a statement.

1:29
NY expanding capacity for museums, zoos, movie theaters and large arenas
2:23
Stormy landing: Anchor from 1876 disaster finds a home
1:10
COVID-19 rate falls as eateries, bars to extend last calls
1:04
10 years ago, they were valedictorians. Where are they now?
1:56
Experts: Prepare dogs, cats to be home alone when you go back to work
Babylon Town weighs options to ease tax 'burden' from Oak Beach water project
Didn’t find what you were looking for?