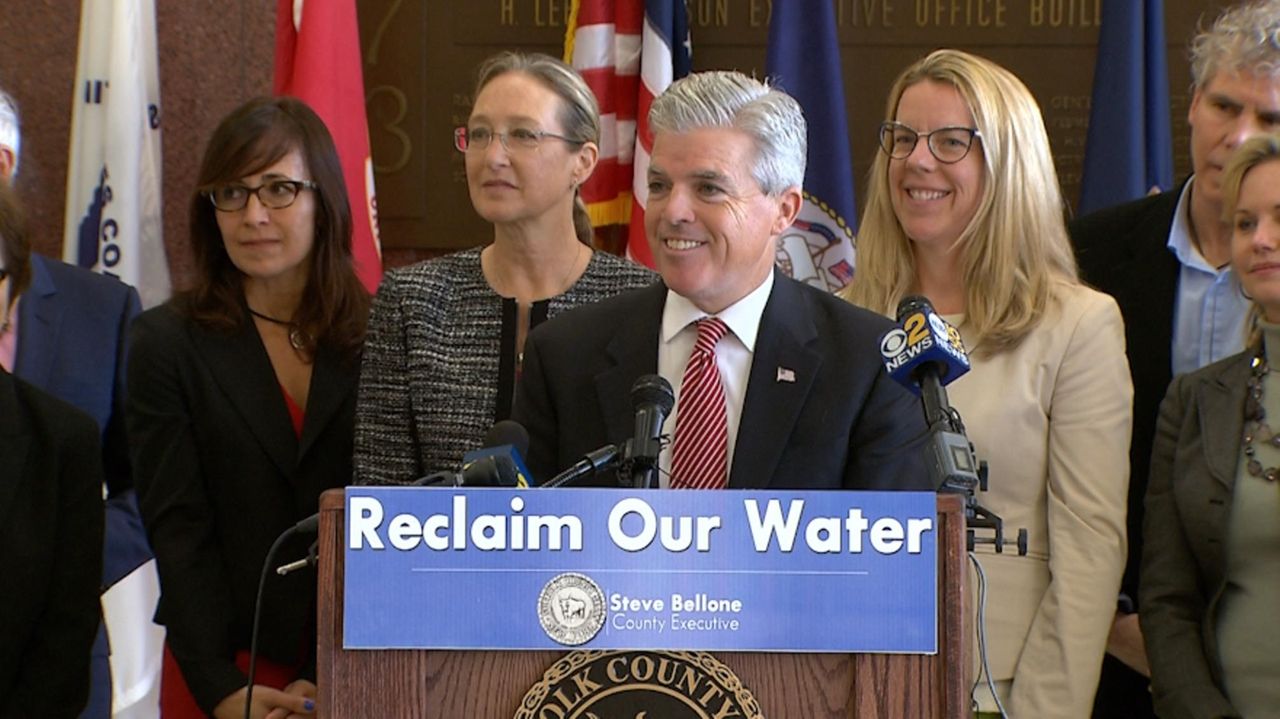 Suffolk County Executive Steve Bellone urged county residents to replace their aging septic systems and cesspools, at a news conference in Hauppauge on Wednesday, March 29, 2017. He announced a pilot program to help homeowners pay for the installation of septic systems with county-approved technology that sharply reduces nitrogen output to improve water quality in the region. About 360,000 homes in Suffolk rely on traditional septic systems and cesspools to get rid of waste. But those systems do not remove nitrogen, which can cause algal blooms, hurt fish stocks and degrade marshland. Credit: News 12 Long Island

Suffolk County Executive Steve Bellone wants residents with aging septic systems to replace them, and he’s pushing a plan that would use grant money and loans from a nonprofit to help cover the costs.

If homeowners install septic systems with county-approved technology that sharply reduces nitrogen output to protect area waters, they will be eligible for up to $21,000 in loans and grants through a pilot program, Bellone said.

“For us, this is the critical issue of our time,” Bellone told Newsday. “This program makes it affordable and workable.”

An estimated 360,000 homes in Suffolk rely on traditional septic systems and cesspools to get rid of waste. But those systems do not remove nitrogen, which officials say burdens the area’s lakes, streams, creeks and bays — causing algal blooms, hurting fish stocks and degrading marshland.

To reduce nitrogen and improve water quality, the Bellone administration is pushing sewers in some areas, such as Sayville and Oakdale, in addition to backing the plan to replace septic systems.

“By helping property owners defray the costs of replacing outdated sanitary systems and cesspools with new, more effective nitrogen removal systems, this grant program will stomp out the biggest contributors to the degradation of water quality in Suffolk,” Gregory said in a statement.

A public hearing is expected April 25, and a vote could come as soon as May 16.

If passed, $2 million annually from an assessment-stabilization reserve fund will be available for two years to cover the grants, Deputy County Executive Peter Scully said.

So far the county has three approved systems, which tests show reduce nitrogen amounts by at least 70 percent. Installation costs range from about $14,500 to $17,500.

Scully said an estimated 400 systems could be installed.

The priority will be in coastal and low-lying areas where septic discharges can flow into the water system within two years, he said.

Only single-family, owner-occupied, noncommercial properties will be eligible. County employees, elected officials and political party officers will not be eligible, according to the legislation. Rental properties and those with open property-tax liens also will be barred.

If approved, the county will give a grant of up to $10,000 per unit. If a homeowner chooses to add a shallow drainage system to help fertilize and irrigate their lawns, the county will add another $1,000.

The Community Development Corporation of Long Island will also offer 15-year loans of up to $10,000 at a fixed rate of 3 percent through its Funding Corporation, which is a non-bank lender, said Marianne Garvin, who worked on the project before retiring from the corporation as president and CEO earlier this month.

A $1 million line of credit from Bridgehampton National Bank and $500,000 in donations from other foundations are also helping fund the loan program, Garvin said.

“When you have a situation where the burden of solving a regional issue is going to be borne by select individuals — in these cases you should figure out how to spread these costs out,” Bellone said.

Dick Amper, executive director of the Long Island Pine Barrens Society, who has long been a proponent of efforts to reduce nitrogen, supports the pilot program but said more is needed.

“The source of the money is an important first step,” Amper said. “It is clearly not going to address the problem, which needs a recurring source of funding.”