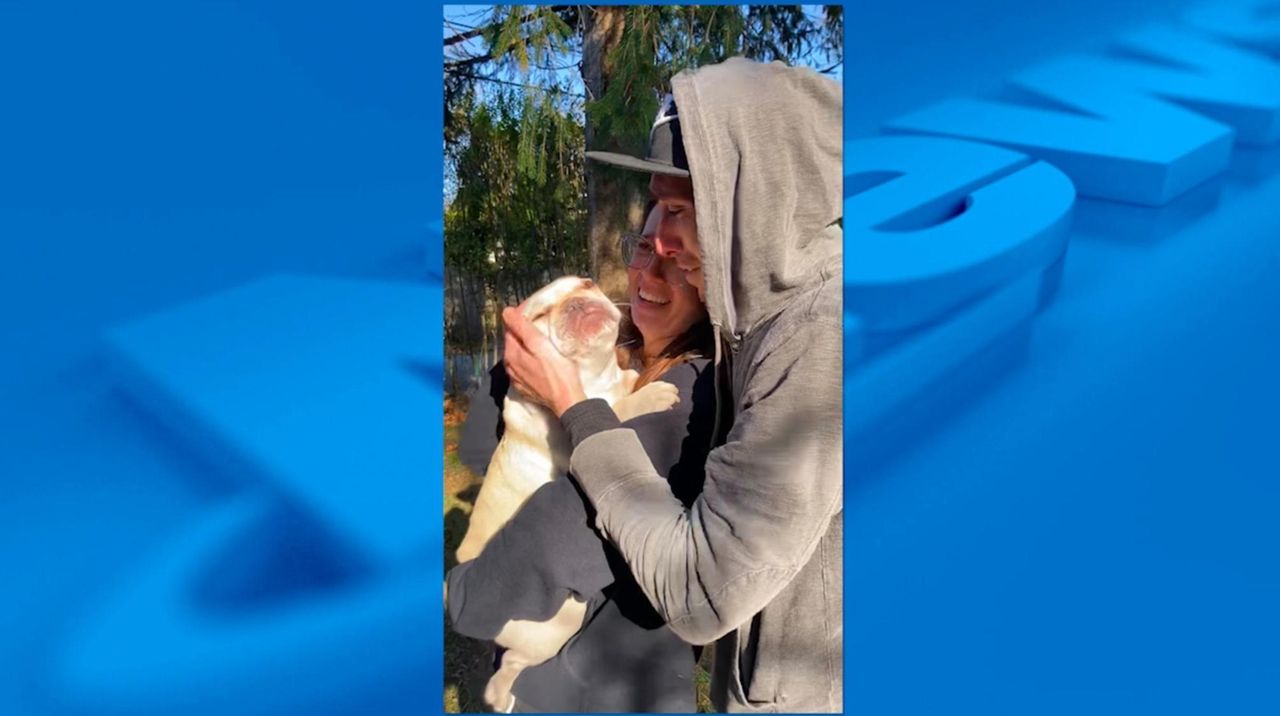 Stella, a French bulldog that police said was stolen from a Huntington house on Thanksgiving Day, was reunited Saturday in Center Moriches with her owners, Matthew and Jennifer Hauck.  Credit: Colleen France

A French bulldog stolen during a Thanksgiving Day burglary in Huntington has been reunited — more than 30 miles away, in Center Moriches — with her joyful owners.

"Our family is whole again," texted Matthew Hauck, who with his wife, Jennifer, hugged the 20-pound purebred, Stella, 4, at the reunion.

Stella was found Saturday morning by Colleen Franca, of Brooklyn, who was out walking her sister’s dog, a mutt named Mishka, in Center Moriches. Franca said she was told by a passing motorist that a French bulldog had been seen wandering on the street.

Franca said her sister later recalled seeing a report on Facebook of the burglary. "That was all the way in Huntington. So, we’re like, ‘How did the dog end up here?’ We don’t know," Franca said.

The burglary was sometime between 4 p.m. and 11 p.m. on Thursday, when one or more burglars entered the home on Robin Lane, and took Stella and a Sony PlayStation 5 video game console, according to a Suffolk County Police Department news release.

The Haucks were not home at the time, and whoever committed the burglary might have gone in through an unlocked back door, according to an email from the police press office.

Saturday’s discovery was made on Rhododendron Drive, according to a second news release, which did not say whether police detectives have a suspect in the case.

Franca said she didn’t ask for, and won’t seek, the $5,000 reward offered on a missing-dog poster by the Haucks for Stella’s return.

"We didn’t even talk about the money. It wasn’t about that," she said, adding: "I just was happy they got reunited."

About 2 million dogs are stolen every year, according to the American Kennel Club, which calls the theft "dognapping."

The kennel club website says thefts often involve "high-value dogs, for example Bulldogs and French Bulldogs, and smaller breeds such as Chihuahuas and Yorkshire Terriers." "The one-of-a-kind French bulldog, with his large bat ears and even disposition, is one of the world's most popular small-dog breeds, especially among city dwellers. ... The bright, affectionate Frenchie is a charmer."

Bulldog stolen from home during Thanksgiving burglary, cops say"We have no kids. This is our kid. So someone came in our house and stole, like, in our opinion, our most valuable possession," owner Matthew Hauck said of his stolen French bulldog Stella.