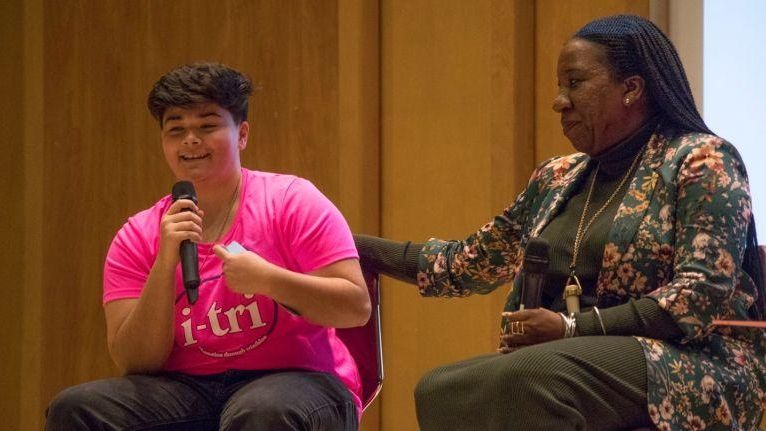 For anyone who wants to comfort a sexual assault survivor but is struggling to find the words, #MeToo movement founder Tarana Burke stresses there is no one-size-fits-all prescription.

“Ask people what they need,” she told an auditorium filled with legislators, nonprofit staffers and students Sunday at Stony Brook University. “What I need is very different from what you might need.”

More than 500 people came to hear Burke speak at a daylong forum hosted by a coalition of domestic violence groups and lawmakers from state and county government. The event, called “#MeToo . . . #LIToo” aimed at getting Long Island business, government and student leaders to implement reforms to prevent and handle sexual misconduct.

“What I heard today were people who had concerns, had questions and were looking across industry . . . across jurisdictions to find solutions,” Burke told the crowd. “To me, this is what radical community healing looks like.”

The day was both a call to action as well as a time to share stories.

County Legis. Kara Hahn (D-Setauket), who organized the event along with Assemb. Christine Pellegrino (D-West Islip), told the crowd that she is an assault and domestic violence survivor, but declined to go into detail.

“I hope this event is a spark that helps spread this movement across Long Island and helps take the conversation to the next level,” Pellegrino said.

Burke, 44, a civil rights activist-turned international figure, created the “Me Too” campaign in 2007 after working with women and girls who had survived sexual assault. She is senior director of Girls for Gender Equity, a Brooklyn-based nonprofit that advocates for the physical, psychological, social and economic development of girls and women.

The campaign surged in prominence as a social media hashtag in October after actress Alyssa Milano called for victims to post #MeToo on Twitter. Within 24 hours, more than 12 million women and some men posted the hashtag on various social media platforms including Twitter, Facebook and Snapchat, sometimes detailing their own experiences of surviving sexual violence.

“One of the most beautiful things about this moment . . . every time we break silence, we give permission to another person,” Burke said.