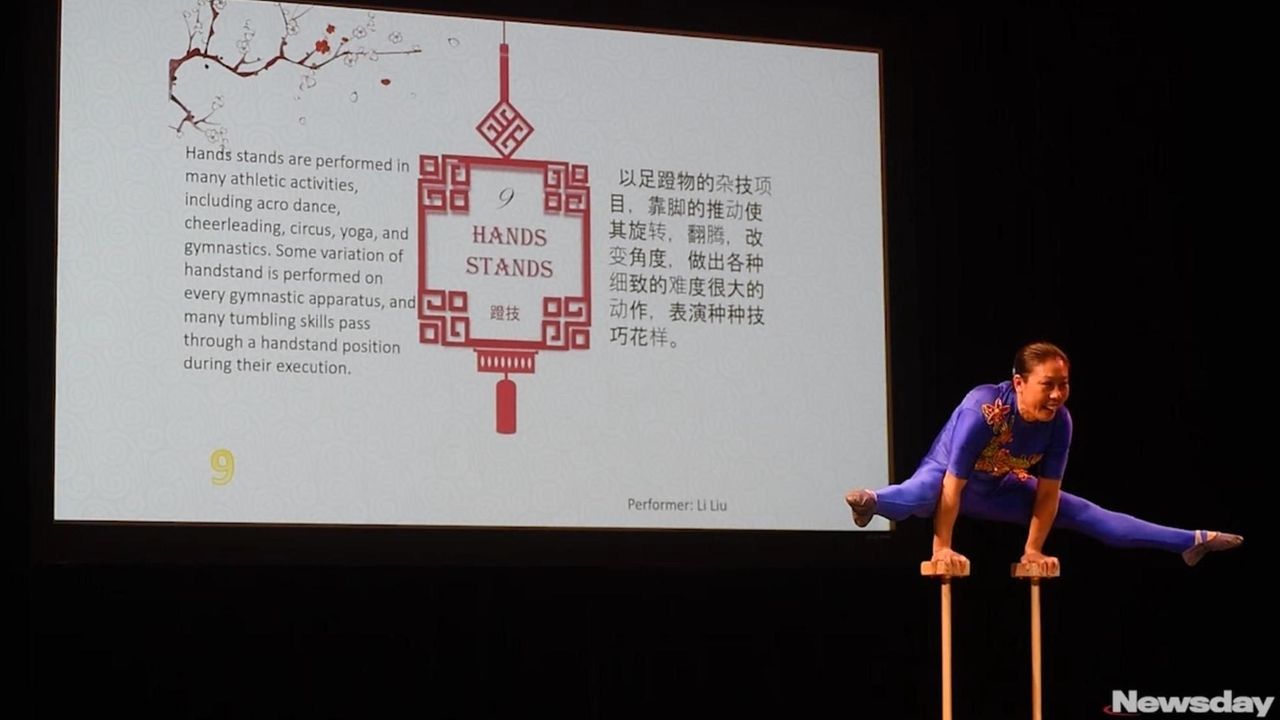 A Lunar New Year celebration hosted by Stony Brook University's Charles B. Wang Center on Sunday, Feb. 18, 2018, drew a wide-ranging crowd. The event, featuring a dinner, family-friendly crafts and a performance hosted by the Stony Brook Confucius Institute, drew about 400 people looking to celebrate the Year of the Dog. Credit: Johnny Milano

An acrobat balancing spinning plates and a traditional lion dance helped ring in the Year of the Dog at The Stony Brook University Charles B. Wang Center Lunar New Year celebration on Sunday.

The event, featuring a dinner, family-friendly crafts and a performance hosted by the Stony Brook Confucius Institute, drew about 400 people looking to celebrate what is the biggest holiday of the year in many Asian countries.

The event, hosted by a major Asian cultural institution on Long Island, attracted a wide-ranging crowd.

“It’s not limited to a student audience. We’re here to offer . . . [cultural events] to all community members,” said Jinyoung Jin, director of culture of programs at the Wang Center. “It’s a great showcase to invite the community.”

According to the 12-year animal zodiac cycle, each zodiac year is associated with an animal sign and 2018 is the Year of the Dog. People born in the Year of the Dog are thought to share positive traits of the animal, like loyalty and dependability.

Although the holiday — which this year began on Friday — is sometimes called Chinese New Year, it is celebrated in a host of Asian countries, Jin said.

Also sometimes called a Spring Festival, traditional celebrations in China include eating a reunion dinner with family, the gifting of red envelopes to children as an act of giving good luck, lighting firecrackers, and decorations where red features prominently. The color red is regarded as a symbol of energy, good luck and happiness — popular themes associated with the holiday.

Minh Nguyen, a Stony Brook computer science professor who was born in Vietnam, came to celebrate his heritage with his 2-year-old son, Don.

“It’s not comparable to what we usually have [in Vietnam], but part of it is for him to experience what we have back home,” Nguyen said. “There aren’t that many events like this, so we tend to bring him whenever we can.”

Natalie Carbone, an artist and art teacher from Lake Grove, attends Lunar New Year events every year, she said while creating an ink painting of a small dog. Growing up in diverse Jamaica Hills, she said she has a deep respect for Chinese contributions to art, fashion and food.

“Our culture in America has been very much influenced by Asian art,” Carbone said. “It has a profound effect on us in every way possible.”

The event also paid homage to Vietnam with traditional folk songs and dance and to Japan, where Lunar New Year isn’t traditionally celebrated, with an origami workshop. There Jessica Darmanie, 17, of Brentwood, created a paper sailboat.

“I’m drawn to learning about other cultures and getting to do traditional activities,” she said.