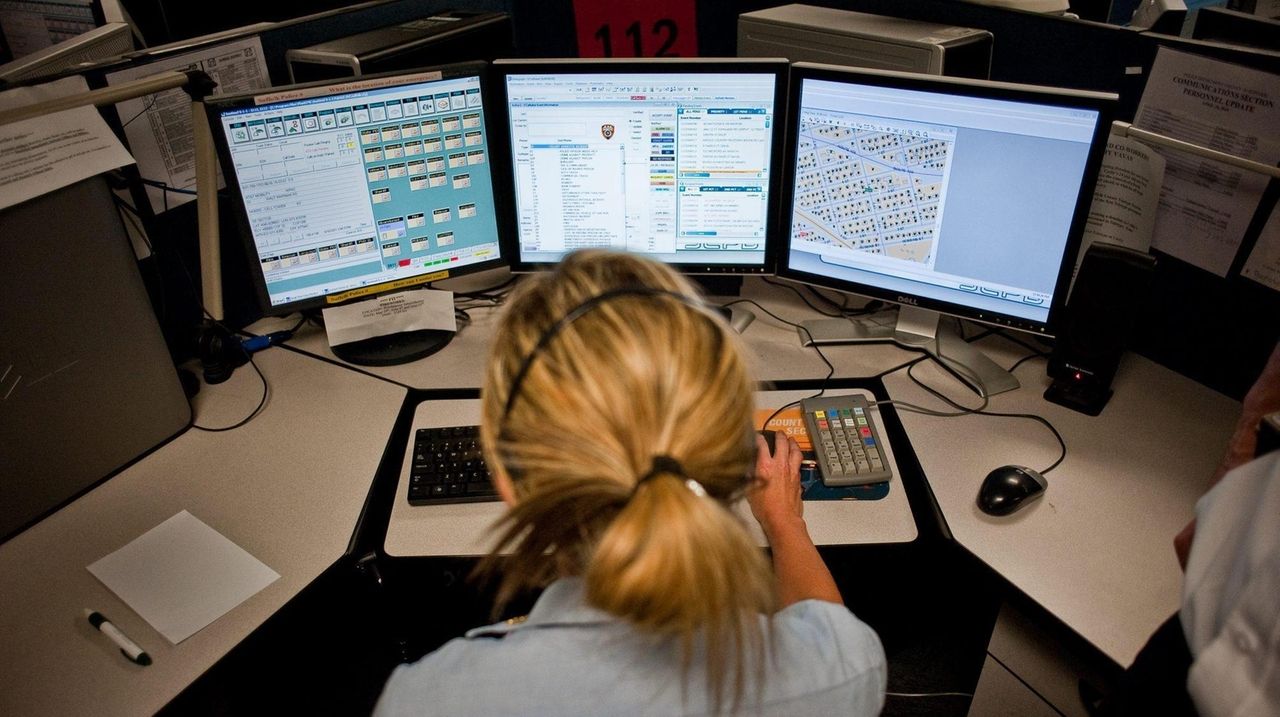 Michelle Ramirez, a supervisor for the 911 call center in Yaphank, says they would like to get staffing to 100% so current operators aren't working as much overtime. Credit: James Carbone

Suffolk County is struggling to fill vacant positions for 911 emergency operators and dispatchers in the police department, as the pandemic has stalled hiring and workers continue to leave their jobs, officials said.

Of the 155 jobs for public safety dispatchers and emergency complaint operators at the county police department, only 136 were filled as of March 1, a 12% vacancy rate.

The recent staff shortages began to attract attention last July, when the vacancy rate for dispatchers hit 13%, according to police department data.

That triggered a county law requiring the department to notify the Suffolk County Legislature when vacancies among dispatchers or emergency complaint operators exceed 10%. The law hadn't been activated since its passage in 2013, according to officials. 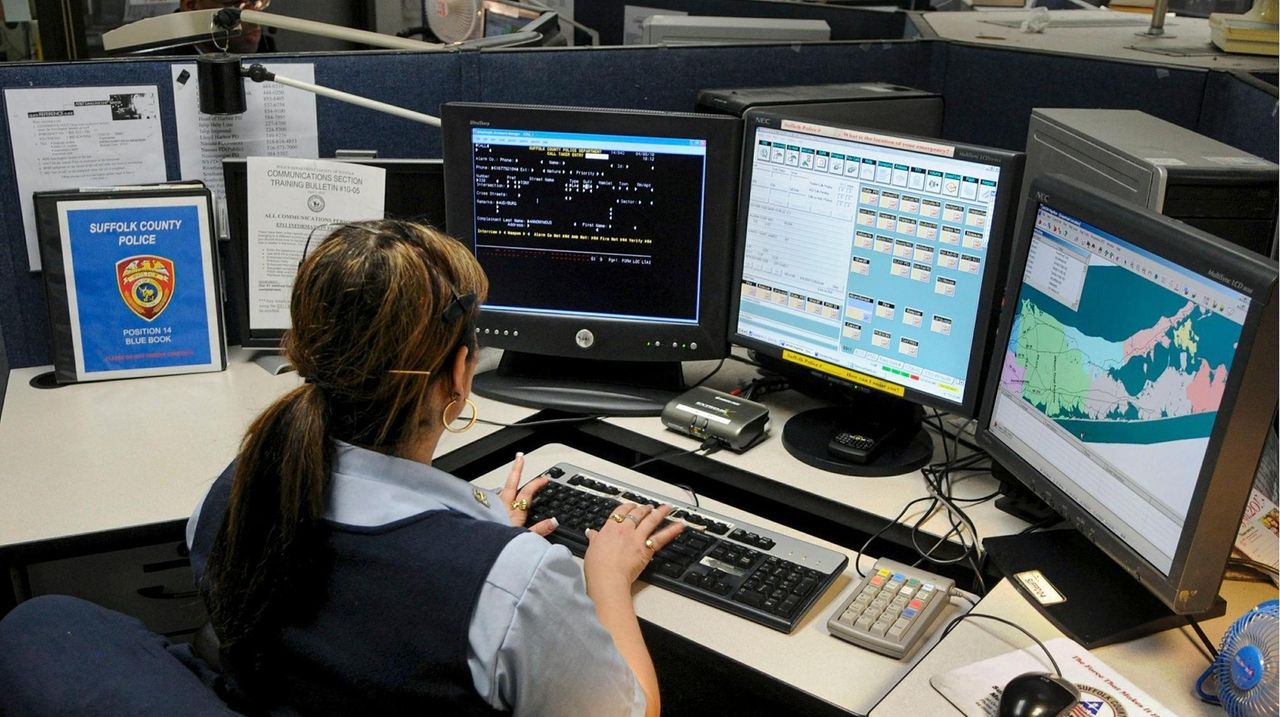 The problem intensified during the holiday surge in COVID-19 cases.

Between November and January, 59 dispatchers and operators — more than 40% of emergency call staff — were absent at one time or another for virus-related reasons, officials said. Of those, 33 had tested positive for the coronavirus, and the rest had to isolate after possible exposures.

Police officials also say they have worked aggressively to hire new 911 staff — but there are few interested candidates left from the last Civil Service test four years ago since many took other jobs.

It also is difficult to retain staff because of the stressful nature of 911 jobs, and the lure of better-paying positions elsewhere.

Base annual pay ranges from $40,000 for entry-level dispatchers and operators to $95,000 for supervisors, 2020 Suffolk County payroll records show.

"It's a stressful job, and the job's not for everybody," Lt. Anthony Calandrillo told county legislators last month. "There's no doubt COVID-19 has added additional stress."

But the overtime takes a toll, she said.

"I do feel burnt out," Ramirez said. "There are times where it's just like, ‘Enough, I can't do any more.'"

The police department said in a statement it has "not seen any appreciable increase in wait times in our 911 system" because of the staff shortages, as a minimum number of employees are required to work each shift.

If there aren't enough workers or volunteers for overtime, the department mandates employees to work additional hours, department officials said.

The Suffolk County Police Department receives about 900,000 emergency calls a year, on issues including shootings, heart attacks and COVID-19 emergencies and deaths, according to officials.

Under a new police reform program passed last Tuesday, emergency operators and dispatchers also will have the responsibility for funneling calls involving mental health crises to social workers and a mobile crisis team run by the department and the nonprofit Family Service League.

As of February 2020, just before the pandemic struck, the 911 communications section was nearly fully staffed, with 148 workers, according to legislative budget analysts.

Vacancies increased last May and June, when a large portion of a new trainee class quit after realizing the demanding nature of the job, Calandrillo said. About a third of new hires leave while they still are in training, he said.

Administration of medical and psychological exams required for hiring were stalled during the pandemic, making it difficult to fill vacancies promptly, Calandrillo said.

Since the reporting requirements of the 2013 county law were triggered last July, nine dispatchers and five operators have retired or resigned, according to police officials and 911 workers.

Initiatives to address the emergency operator shortage in Suffolk include filling vacancies automatically, suspending a plan to reduce the number of complaint operator positions and trying to take some pressure off the 911 system with a 311 center for callers who need general information from the county.

Last fall, the police department hired eight dispatcher trainees — five of whom have stayed on. The department also has received approval from the county Department of Civil Service to allow the four-year-old candidate list to expire, so emergency call staff can be recruited and hired as needed.

Police officials said they also are discussing whether to boost pay rates for operators and dispatchers.

"It is a priority of not only the police department but the county executive's office to make sure that these positions are filled and staffed correctly," Nicole Amendola, Suffolk's intergovernmental affairs director, told the legislature in March.

Daniel Levler, president of the Association of Municipal Employees, which represents 911 dispatchers and operators, said the union secured an agreement that the county would hire up to 18 new dispatchers to make up for high attrition. Police officials said they were in the process of making the new hires.

"We will not stop fighting until the county restores staffing levels to sufficient levels that alleviate the stress levels of these essential workers," Levler said.

The shortage of Suffolk 911 workers is a long-running problem.

In 2012 and 2013, about 20% of jobs were unfilled, prompting complaints from 911 workers that they frequently had to work 16-hour shifts, and lacked time to go to the restroom.

"We've heard testimony for years about the working conditions and the morale and high turnover rates and mandated overtime, and we continue to be frustrated," Deputy Presiding Officer Kara Hahn (D-Setauket) said during a public safety committee meeting last month.

"These are critical workers, and there are serious problems that continue in terms of hiring and staffing levels," Hahn said.

Ramirez, the dispatcher supervisor, noted the particular stresses of the pandemic period, including the fear of infecting family members at home.