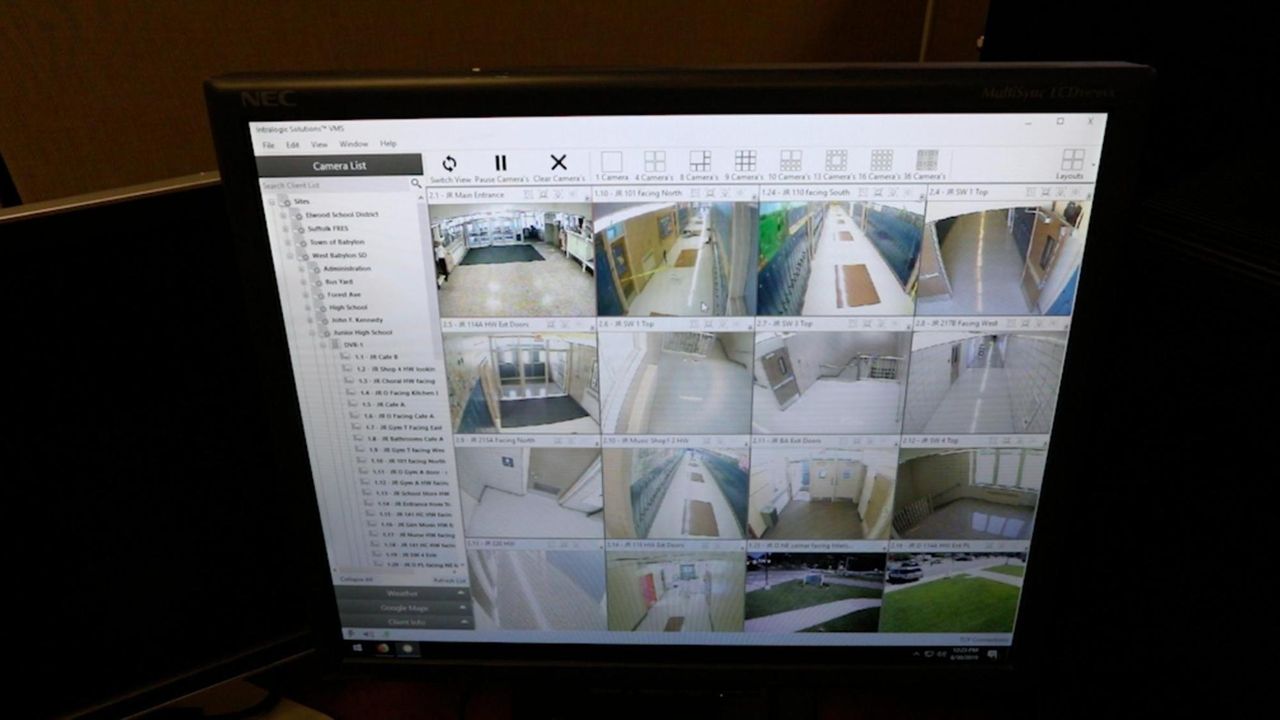 Suffolk County officials conducted an 'active shooter' drill Friday at the West Babylon Junior High School. The drill was a demonstration of new technology that allows police at a command center room to unlock doors for responding officers, send out a photo of the suspect and use the school’s public announcement system — all within a minute or so of the 911 call. Credit: Newsday / Chris Ware

A "gunman in red" banged on a classroom door as officers rushed through a side door of the West Babylon Junior High School on Friday morning in a drill to keep schools safe.

“Units, go down the hallway and make a left,” the 911 operator directed as she watched the action unfold through school surveillance cameras at Suffolk police headquarters in Yaphank.

The "active shooter" drill demonstrated the new technology that allowed police at a command center to unlock doors for responding officers, send out the suspect's photo and use the school’s public announcement system — all within a minute or so of the 911 call.

Seconds save lives, county officials said at the demonstration Friday.

“Everywhere where we can shave off a few seconds is valuable,” Chief of Department Stuart Cameron told reporters.

That also was the message emphasized by County Executive Steve Bellone and Police Commissioner Geraldine Hart to persuade more school districts to sign up for the initiative, Sharing to Help Access Remote Entry, which lets police tap into schools’ closed circuit cameras and other systems during emergencies.

The department in June rolled out the program, SHARE for short, and so far 11 of 68 Suffolk districts have signed up since registration started this summer.

Cameron said more districts were inquiring about this as they prepared for the new school year.

The biggest concern from school officials is privacy, he said, but the department has promised to use the tools only in emergencies, such as in cases of intruders and shootings.

“There is no place that we are more concerned about than where our kids are, in our schools,” Bellone said at the news conference.

“We must be ready for the unthinkable to happen here,” Hart said.

The technology was made available to Suffolk police for $1 by IntraLogic Solutions, a Massapequa-based security company, and Suffolk school districts participate for free.

Lee Mandel, IntraLogic Solution's chief executive, said Suffolk's deployment of SHARE was more "advanced and innovative" than efforts by other police departments because so many tools had been tied into the system. That includes the Rave mobile app, a smartphone system that allows school staff to call 911 and simultaneously alert other authorities.

In Friday's drill, police showed what could have happened in a normal response — officers find a set of three steel doors are locked and time goes by as they knock and peer through the glass before school security arrives to unlock the doors. Officers then search each classroom.

But with SHARE, police unlock the doors by using the school's remote door control system. Dispatch in the command room gives officers directions to the suspect. The gunman eventually hops into a getaway SUV, but police "assets," such as street cameras, track him. In this case, a police license plate reader hooked into SHARE uses facial recognition technology to analyze color and make of car and sends a photo of the plate back to the command center and Cameron's computer tablet. The system tracked down the SUV owner's name, and police looked up his social media accounts.

Cameron said SHARE could also be used in other places, such as malls, and police planned to add other tools, such as businesses' surveillance cameras. He said police would practice drills at every school that wanted to participate.

"It's sick that we have to do this," Mandel said at the police command center. "But this is the future here."