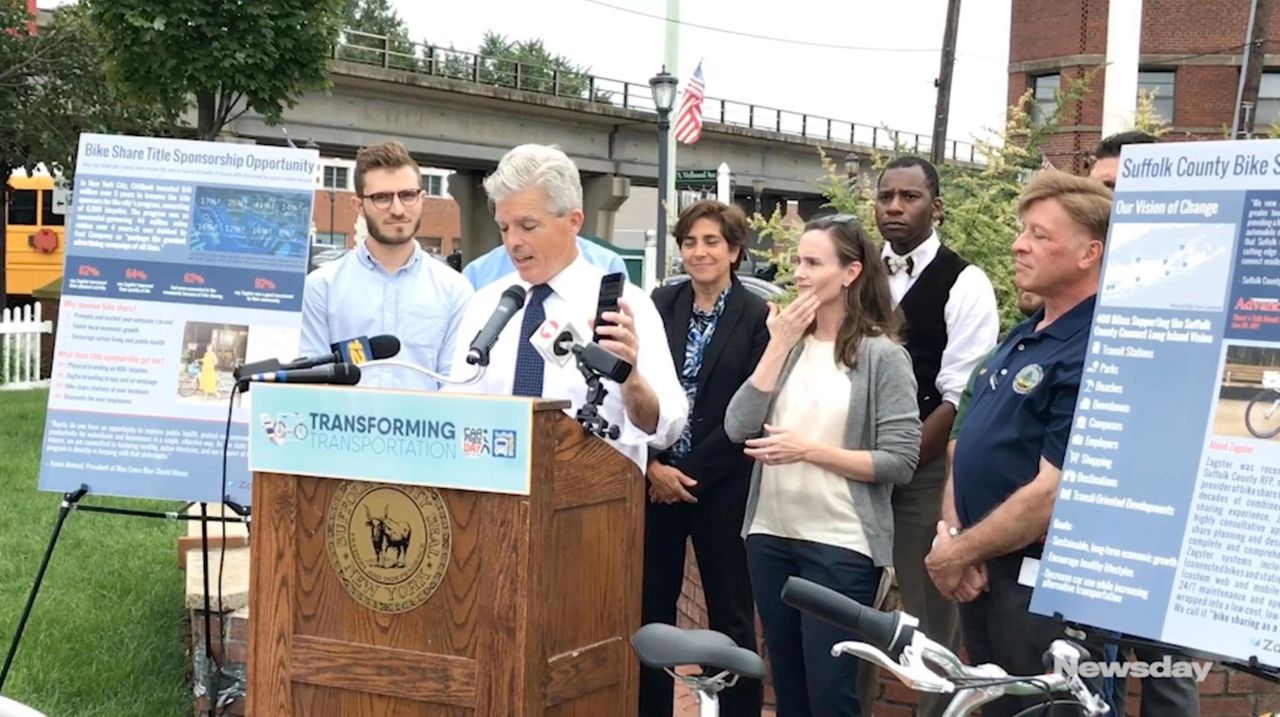 Bellone unveiled the free app during a news conference in Lindenhurst Village on the county’s sixth annual Car Free Day, an international event that encourages residents to leave their cars at home for the day. Suffolk FastFare is a mobile payment app that allows users to buy Suffolk County Transit tickets, including bundles, and also track bus arrival times in real time by using a link to the TransLoc Rider app, which was launched last year. Once a ticket is purchased, it will be displayed on screen as a digital watermark, which riders show to the driver.

Suffolk FastFare also has links to other transportation schedules, such as the Long Island Rail Road, Bellone said. The app “modernizes our Suffolk transportation system,” he said.

Bellone, who said he did not abandon his vehicle but went “car-light” on Friday by not using his car as much as he normally would, also used the event to elaborate on the county’s planned bike-share program.

In May, the county announced that it had hired Boston-based Zagster Inc. for the program, which allows riders to rent bikes and drop them off at various locations by using a mobile app. County officials had said the program, known as Pace, would roll out by the end of the year, but Bellone said Friday that spring 2019 is the new launch date.

A bike-share program, Bellone said, would not only “reduce congestion and improve air quality but would help solve the critical problem of that last-mile connection” when using public transit in the county.

“This is the next step in offering as many alternative mobility options as possible,” he said. “This will change the mobility landscape in Suffolk, putting once out-of-reach office locations and parks within easy biking distance now.”

Zagster market manager Karl Alexander said the program will be no cost to municipalities. Once a sponsor is secured — which he said the company hopes to do by the end of the year — the roughly $1,400 purchase and maintenance cost of each bike will be covered, with revenues going to Zagster. Alexander said that bikes at the company’s more than 200 locations, which include suburban areas such as Salem, Massachusetts, typically rent for $1 for every 30 minutes.

Alexander said eight communities in the county have expressed interest in the program, from Amityville in the west to Southampton and Southold in the east. He said the goal is to have 400 bikes in the county, starting with bike docks in recreational areas such as parks and trails and then placing them near train stations and downtowns.