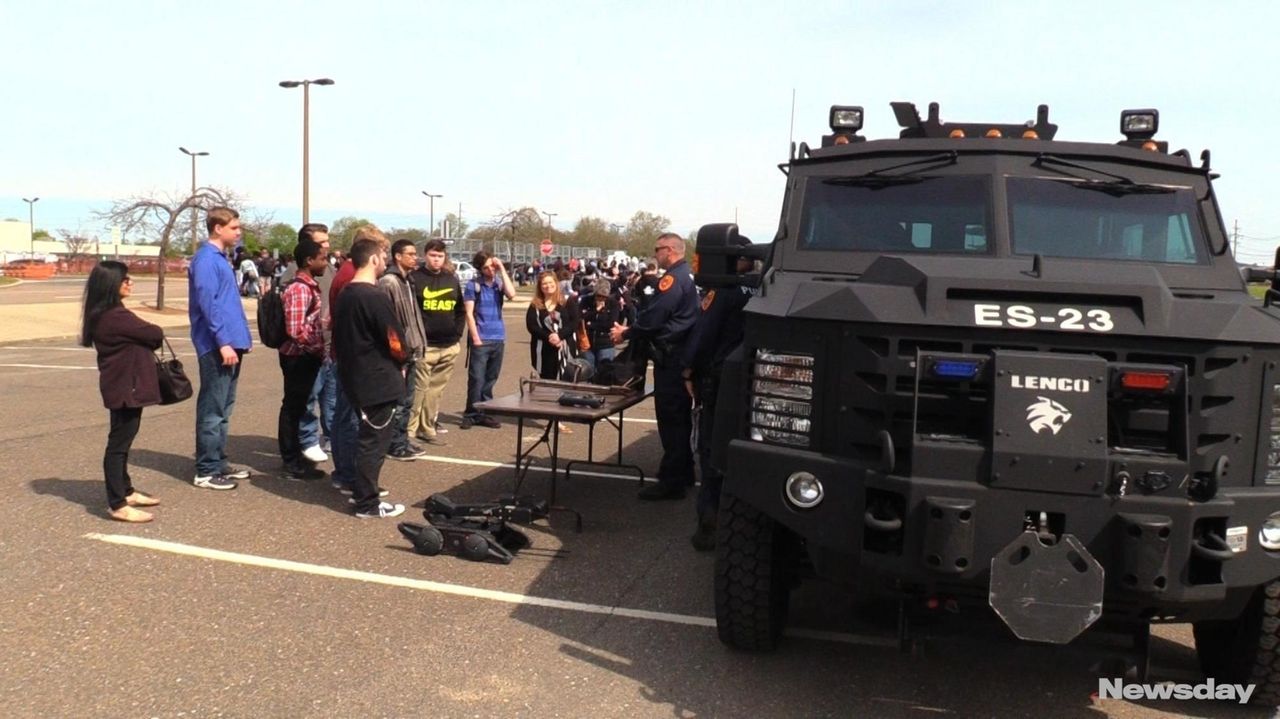 Thousands of Suffolk County students will get a look at the dangers of driving under the influence and while texting during the start of Police Week at the county’s police headquarters in Yaphank. The annual event kicked off Monday, May 7, 2018, with more than 700 students from 16 high schools participating in the distracted driving program, police said. Credit: James Carbone

Taylor Gulick was challenged by Suffolk County police officers Monday morning to walk a straight line to determine if she was drunk.

Gulick hadn’t been drinking. She was given the sensation of being drunk by wearing special goggles and was given a mock sobriety test. It was all part of a demonstration for Suffolk County Police Week, which started Monday.

Gulick is among thousands of Suffolk County students getting an up close and personal look this week at some of the challenges and activities law enforcement officers face daily, including pulling over drunken motorists and drivers texting while on the road, pursuing suspects, rescuing victims from accident scenes and collecting evidence from crimes.

The event is being held on the grounds of Suffolk County police headquarters in Yaphank.

Working in conjunction with Stony Brook University, the police department guides the students through a series of simulations meant to deter risky driving behavior and teach them about what police work actually involves.

Also included during the week are police vehicle displays, rescue helicopter demonstrations, lessons in forensic work, and how the police marine bureau and bomb squads operate.

Gulick, who wore goggles to simulate alcohol impairment during the drunken driving demonstration, said she learned just how easily her senses can be impaired by alcohol.

“It’s amazing. This shows young high schoolers the effects of drunken driving and a lot of schools should demonstrate this,” said Gulick, a student at the Eastern Long Island Academy of Applied Technology in Oakdale.

Officers also demonstrated what to do when you’re stopped by the police.

Vintage police vehicles were on display in addition to drones, police boats and robots.

“Each year it’s been building,” said Sgt. Kathleen Kenneally of Police Week. “We add different things to make it timely.”

Student events will be held from 10 a.m. to 3 p.m. through Thursday. On Friday, a memorial for the families of fallen Suffolk County police officers will close out Police Week.

This is the first Police Week for new police Commissioner Geraldine Hart.

Hart, speaking in her office at the end of Monday’s program, said Police Week has been held for more than 20 years. She said it gives students a chance to become familiar with issues such as distracted driving and vaping, but she added that Police Week also offers an opportunity for recruitment.

“It was a school trip that introduced me to law enforcement,” Hart said.

She said it is great for students and police officers to interact in a relaxed and fun environment.

“People really put their heart and soul into this and really enjoy it,” Hart said.

One of the most popular attractions is half-hour show held at the emergency-vehicle operations course, in which officers show how they are trained to drive police cars in chase situations.

K-9 and aviation section officers also participate, showing spectators the obedience and agility training police dogs receive; and how the animals help catch suspects, and locate drugs and contraband. Also, accident rescues are demonstrated that involve extricating a victim from a car crash to be airlifted by police helicopter to a trauma center.

“I think this is all pretty cool,” Edwin Moran, 17, a Southold High School student, said as a demonstration on crime scene evidence collection wrapped up. “In the future I want to do this stuff.”

Katherine Luberto, a forensic science teacher at Commack Middle School who brought a group of seventh- and eighth-graders to the event Monday, said it’s important for students to see the reality of police work and realize it takes a lot of training that might not come across on television.

“Seeing all of this,” Luberto said, “gives students a lot more respect for the police.”

NY pols call for quick dredging of 'dangerously shallow' Jones Inlet
Demonstrators praise Blakeman's opposition to mask mandates
Pfizer board member: Likely no COVID-19 shot for kids under 5 until at least late March
Long Island forecast: Chance of snow overnight, and cold temps continue
Hochul holding a commanding position in race for governor
Nassau assessments frozen for second year in a row
Didn’t find what you were looking for?