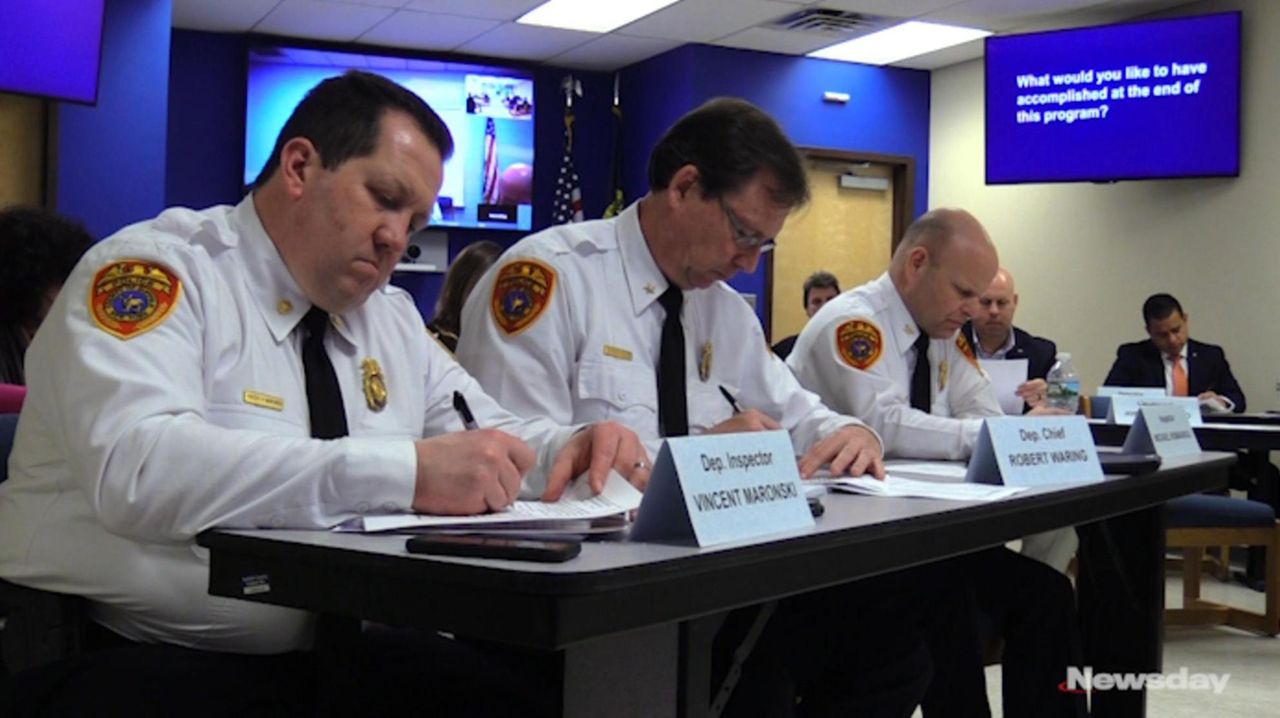 Suffolk Police Commissioner Geraldine Hart spoke about a pilot program that will help police officers learn how to speak Spanish. The program is aimed to help officers learn how to ask non-English speakers basic but important questions in Spanish when they encounter those individuals in crisis situations.  Credit: James Carbone

When Sgt. Bonnie Raber introduced herself at the Suffolk County Police Department’s inaugural Spanish for Law Enforcement class, she told instructor Lina Rojas Bustamante that she is planning a trip to Spain this summer.

Raber and the other officers assembled at the SCPD's Yaphank headquarters, however, didn't sign up for the class so they could order paella in Madrid. The class, according to Chief of Department Stuart Cameron, is intended to help Suffolk officers better serve Long Island's burgeoning Spanish-speaking community.

“A class like this could prevent a tragedy,” Cameron said. “Communication is such a basic function of law enforcement. When you take that off the table, bad things can happen.”

The nearly 20 officers enrolled in this pilot program, all volunteers, will learn how to ask non-English speaking residents they encounter in crisis situations basic but important questions in Spanish — "Who is injured?" "Do you need an ambulance?" "Do you need a tow truck?"

“Part of the motivation for this for me is a community like Brentwood, which is about 58 percent Spanish-speaking, so the majority of the people the cops who patrol Brentwood are dealing with are Spanish speaking,” Cameron said. “There is a community outreach portion of this. We need to be able to communicate with the people we serve."

Cameron said the 7 1/2-week course offered through Suffolk County Community College, which began March 26, is also an attempt to improve the safety of the department’s 2,451 sworn officers. When they respond to potentially dangerous calls such as shots fired, they don’t have time to wait for a Spanish interpreter.

“You can’t help people,” he said, “unless you can communicate with them.”

Thirteen Suffolk officers, mostly senior-level supervisors, attended Bustamante’s class in Yaphank while a half-dozen cops participated via the department’s VIPER system — Video Interactive Police Education Resource — from precinct houses. The VIPER system records the sessions, so officers who miss a class can watch it later to get caught up. Police officials will assess the course, which cost the department $1,995, or about $100 per student, later this year to determine if they want to offer it again. The money came from the department’s asset forfeiture funds.

The class represents another step in the department’s effort to strengthen relationships with Suffolk County’s minority communities and ensure non-English speakers can access police services. Police reached an agreement with the U.S. Department of Justice in 2013 to overhaul its policing of minority communities after a yearslong federal civil rights investigation prompted by the fatal stabbing of Ecuadorian immigrant Marcelo Lucero by a group of teens in Patchogue. Lucero’s 2008 death brought to light allegations that the police hadn’t fully investigated reports of other attacks on Latino immigrants.

In its most recent report in October, the Justice Department said Suffolk police had achieved “substantial compliance” but had failed to fully implement a language access plan or provide translated forms and documents on its website. The report did praise the department for giving officers tablet computers to access the department’s Language Line, which provides translation services in more than 200 languages.

As of last year, police had 75 Suffolk officers who certified as bilingual in Spanish and English. Another nine officers who completed testing and certification are now authorized Spanish interpreters.

“It is absolutely essential for us as a department, to be effective to make sure that we are connected with our communities,” Suffolk Police Commissioner Geraldine Hart said.

The department initiated a pilot program in March that gives residents the ability to submit police reports in English and Spanish through a kiosk located in the lobby of the Third Precinct, which includes Brentwood, Central Islip and other hamlets with large Spanish-speaking communities. The kiosk is designed to reduce wait times and improve efficiency for residents who want to report fender benders and other minor incidents.

The department also unveiled in November a $215,000 marketing campaign to encourage Latinos and other minorities to consider careers as cops. The campaign includes posts on social media, advertisements on buses and announcements in Spanish-language media, as well as visits to churches, schools and other institutions by police and county leaders. The department has also expanded its recruiting staff from one officer to four.

Police and county officials, including Suffolk County Executive Steve Bellone, have also visited churches, mosques and other community centers in recent weeks to encourage minorities to take the entrance exam for the department.

The application deadline was on Wednesday and the entrance exam will be offered June 15.

Cameron is leading by example: He began studying Spanish nearly a year ago and recently showed off his new language skills by addressing hundreds from the pulpit at St. Anne’s Roman Catholic Church in Brentwood.

“There are ways to increase the organic diversity within our department,” Cameron said. “I can’t change my ethnicity but I can make myself more diverse by learning Spanish.”