The destruction Saturday's tornado wrought on the Department of Public Works building in Westhampton Beach is seen on Monday. Credit: Howard Schnapp

Suffolk County Executive Steve Bellone declared a state of emergency for the county Monday and said officials are still assessing damage from three tornadoes that tore paths through East Islip, Manorville, Shirley and Westhampton, among other areas.

In Hempstead Town, where one of the four twisters touched down Saturday just after 2:30 p.m., Supervisor Don Clavin said he contacted state officials Monday to "help reimburse some of the funds that we’re expending for the cleanup."

Brookhaven Town, where officials said a tornado caused more than $1 million in damage to a town recycling center, is also seeking an emergency declaration by the state, according to Supervisor Ed Romaine. 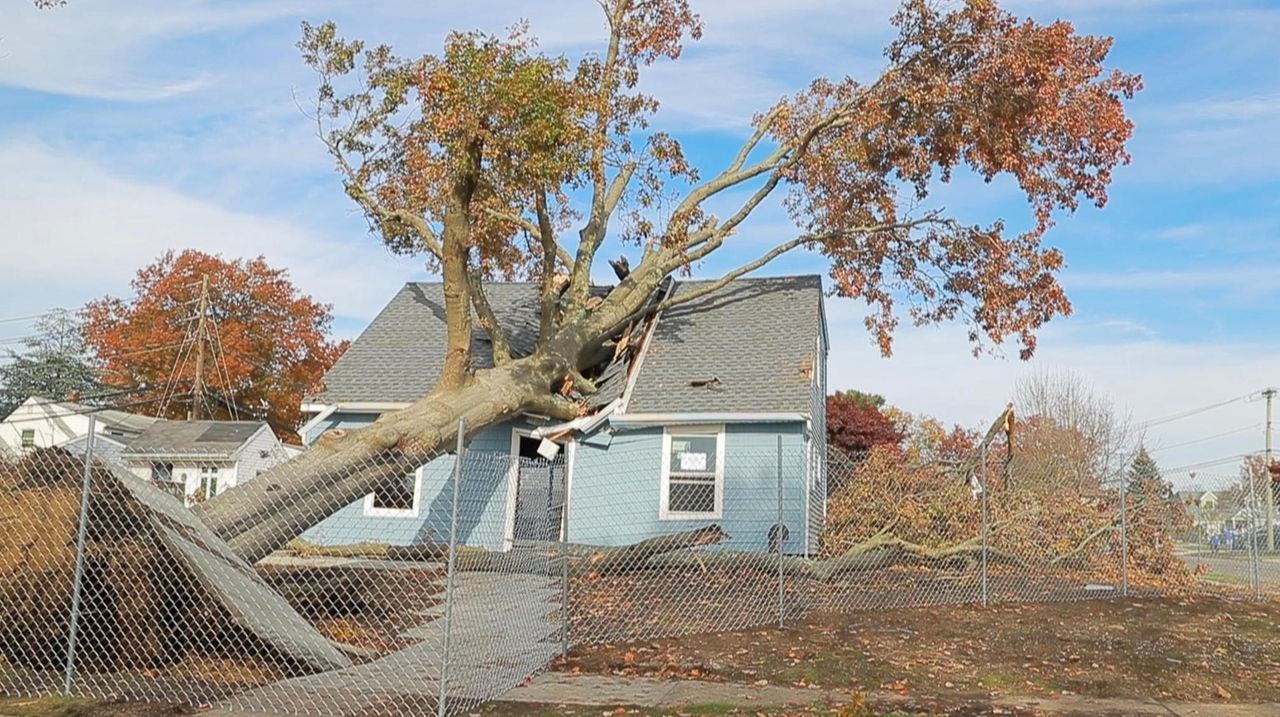 Long Islanders assess damage after powerful storm Homes in Nassau and Suffolk sustained damage in Saturday's storm. In Levittown, a tree sliced through a home and collapsed on the back of it too. Newsday's Steve Langford reports. Credit: Raychel Brightman; James Carbone

"We may have to replace the whole roof," Romaine said, adding that the facility's commercial air conditioners also sustained damage.

He called the tornadoes "extreme weather events" that are getting stronger.

"Growing up, we didn’t talk about tornadoes," Bellone said. "Now we’re talking about three different tornadoes that weren’t in the forecast at all."

A representative from the office of Nassau County Executive Laura Curran did not immediately respond to a request for comment.

Officials in the governor’s office said they are working with local municipalites to find the best way to proceed.

A tornado touched down in Woodmere at 2:37 p.m. Saturday where it took down several trees and power lines, according to a report from the National Weather Service. The twister then "lifted and skipped in a few locations as it traveled nearly 50 mph to the northeast toward Hempstead, Uniondale and Levittown," the report said.

Clavin said he contacted Gov. Kathy Hochul's office to get state officials to consider "the fact that it was verified tornadoes that hit the area and there will be costs associated with it and if the state would look at maybe doing a declaration of a state of emergency."

Clavin said the cleanup costs will not impact Hempstead Town's $500.3 million 2022 budget that was approved in October.

"But the most important thing," he said, "is it’s really about the safety of the residents, that’s always going to take a priority."

Romaine said nine planes were damaged at Calabro Airport and costs to repair the recycling center off Horseblock Road "are easily more than a million dollars."

However, Romaine said, there will be no short-term effects for residents in regards to recycling.

"This Wednesday happens to be paper and cardboard," he said. "We will work our way through this until the roof is replaced."

Southampton Town Supervisor Jay Schneiderman said he will look to see if the town can waive fees at transfer stations so residents can drop off debris from the storm.

4 tornadoes touched down on LI Saturday, weather service confirmsOn Monday, the National Weather Service confirmed that a fourth tornado spanned Remsenburg to Westhampton. One of the four tornadoes, the one that struck Shirley and Manorville, was an EF-1, with wind speeds of 110 mph, the weather service said.