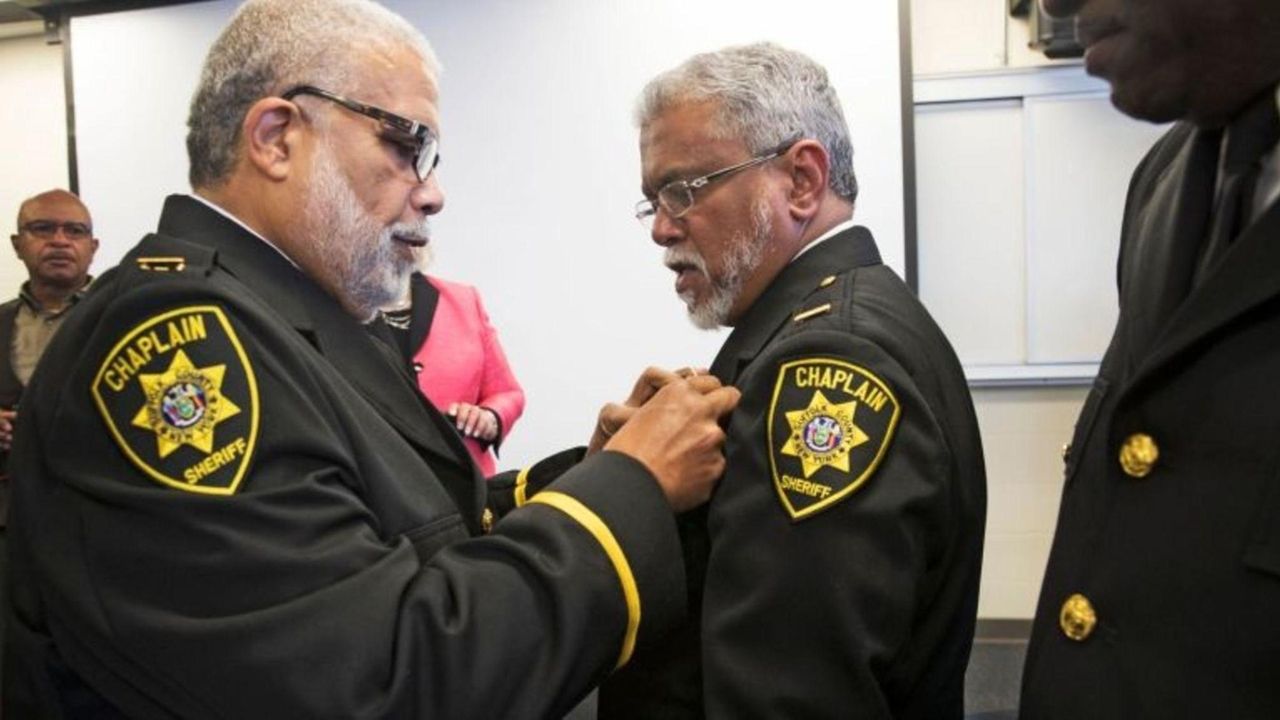 The Suffolk County Sheriff's Office on Thursday swore in eight chaplains, the first time in its centuries-long history to establish the post. The chaplains, all volunteers -- including Catholics, Protestants and one Muslim -- wore sheriff's uniforms and also were given badges at a ceremony at the Yaphank Correctional Facility. They will minister to the department's 1,300 employees. Credit: Randee Daddona

The Suffolk County Sheriff’s Office on Thursday swore in eight chaplains, the first time in its centuries-long history to establish the post.

The chaplains, from various religious denominations, wore sheriff’s uniforms and also were given badges at a ceremony at the Yaphank Correctional Facility. They will minister to the department’s 1,300 employees.

Sheriff Errol D. Toulon Jr., who took over in January, told the new chaplains that the initiative is “among my highest priorities.”

Sheriff’s deputies and correctional officers are “putting their personal safety on the line for the greater good of society,” Toulon said. Often they find themselves in “challenging and even life-threatening circumstances,” and need spiritual support and guidance.

The chaplains, who are unpaid volunteers, include Catholics, Protestants and one Muslim. One chaplain is from El Salvador and speaks Spanish. Others are African-American. Two are former correction officers in the department.

The chaplains will minister to about 850 correction officers, 250 deputy sheriffs and 200 civilian employees.

Toulon, a Roman Catholic and graduate of Cardinal Hayes High School in his native Bronx, said in an interview that chaplains and spirituality in general had helped him.

When he was hospitalized twice — once to treat cancer — chaplains visited him and helped him get through the crisis.

“I have spoken to many rabbis or imams who have helped me,” Toulon said. “You need a higher being that’s really going to get you through some troubling times.”

He also noted that when he was in high school he served for two years as a batboy for the Yankees near his home in the South Bronx. Every Sunday before games, a priest or rabbi would visit the clubhouse and talk to the players.

Steven Kuehhas, the undersheriff, or second-in-command, said many large law enforcement agencies, including the Suffolk County and Nassau County police departments, had chaplains.

The chaplains will be available to the workers for anything from job-related stresses to personal matters, Kuehhas said. They are separate from pastoral workers who focus on the 1,400 inmates at the jails in Yaphank and Riverhead that the Sheriff’s Office overseas.

The Rev. Joseph D’Angelo, a longtime chaplain for the Nassau County Police Department, will head the team.

“I think it is a wonderful idea,” D’Angelo said. “Law enforcement is a stressful job. . . . The general public does not understand what law enforcement officers go through.”

“Police are targets now,” he said. “What profession will you walk out of your house, leave your family, and it’s not guaranteed you’re coming home that night, even though you are wearing a gun and a badge.”

Nayyar Imam, the first Muslim chaplain for the Suffolk County Police Department, also is part of the new sheriff’s team.

“This is an honor to work with the sheriff’s department,” he said.

Part of Imam’s duties with the police include conducting cultural awareness programs. Among the things he explains to new recruits is that Muslims typically do not look authority figures in the eye, as they do not with members of the opposite sex whom they do not know.

That could raise the suspicion of police who interrogate them, Imam said, “but that doesn’t mean they have committed a crime.” Rather, he noted, it is a cultural trait meant to show respect.

1:38
Divorce attorney for Michael Valva testifies at pretrial hearing
Lawmakers call for safety measures on Southern State
New York should follow CDC, ease mask rules, Curran says
Hempstead man convicted of murder in 2018 shooting
1:58
Bellone backs use of anti-Semitism definition
Excelsior Pass a hot ticket — if you can get one from the state
Didn’t find what you were looking for?