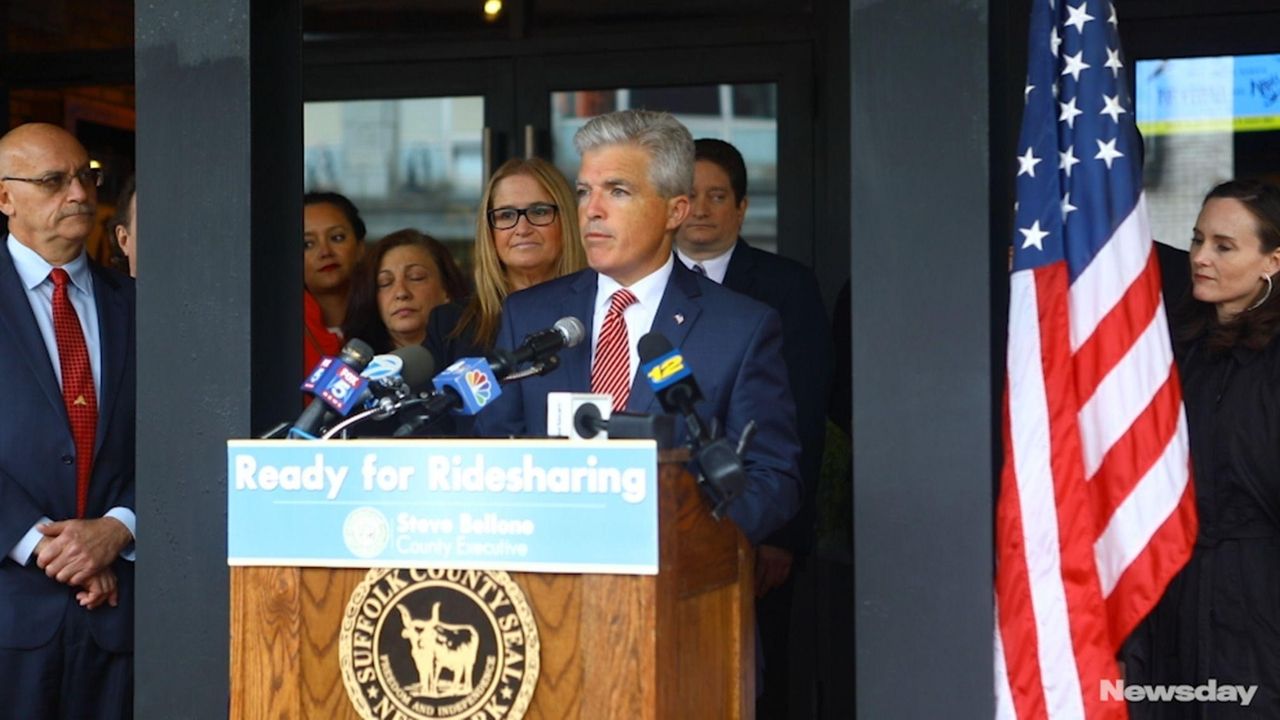 Suffolk County Executive Steve Bellone held a news conference at The Paramount Theatre in Huntington to announce that Suffolk will participate in the statewide ride-sharing program on Tuesday, June 6, 2017. Bellone said it will improve the region's economy and provide more convenient, cost-effective and safe transportation options. Credit: Newsday / Raychel Brightman

Suffolk County Executive Steve Bellone Tuesday became the first downstate suburban official to embrace the startup of local ride-hailing services in time for the July 4 weekend, leaving Nassau and Westchester still to decide whether to opt out.

“We are ready for ride-sharing in Suffolk County,” Bellone said at a news conference under the marquee of The Paramount Theatre in Huntington. “It’s a game-changer for our county.”

Underscoring his stand, the lights read: “Steve Bellone embraces the future of transportation.”

State legislation approved in April will permit ride-hailing services such as Uber and Lyft to operate statewide, although municipalities can opt out. The start date is June 29.

Currently, ride-hailing on Long Island must originate or end in New York City, which has independently regulated the services since 2013. The new law will permit point-to-point rides in counties and municipalities statewide.

Several advocates seeking to restore recent cuts to the Suffolk Transit bus system called for the county to opt out and to seek state legislation to generate revenue through a ride-hailing tax to restore and expand bus routes.

“People who rely on buses need to get what they deserve and not lip service,” said Paul Pressman, a longtime advocate for improving the county bus system.

If problems do arise, Suffolk can opt out at any time, Bellone said.

Alix Anfang, an Uber spokeswoman, said the company expects “a lot of demand,” but could not provide projections of ridership, revenue or the number of drivers expected to be recruited.

The state rules require that the fare or estimated fare appear through the phone app before the ride begins. The app also must display a photo of the driver, the make, model and color of the vehicle and the license plate number. Complaints can be made to the state Department of Motor Vehicles.

Brian Nevin, a spokesman for Nassau County Executive Edward Mangano, said the county had just received the rules and their review is underway.

Suffolk Legis. Kevin McCaffrey (R-Lindenhurst), the GOP caucus leader, said he was “generally in favor” of permitting the ride-hailing services. But he said Bellone should have waited until state rules became available before acting.