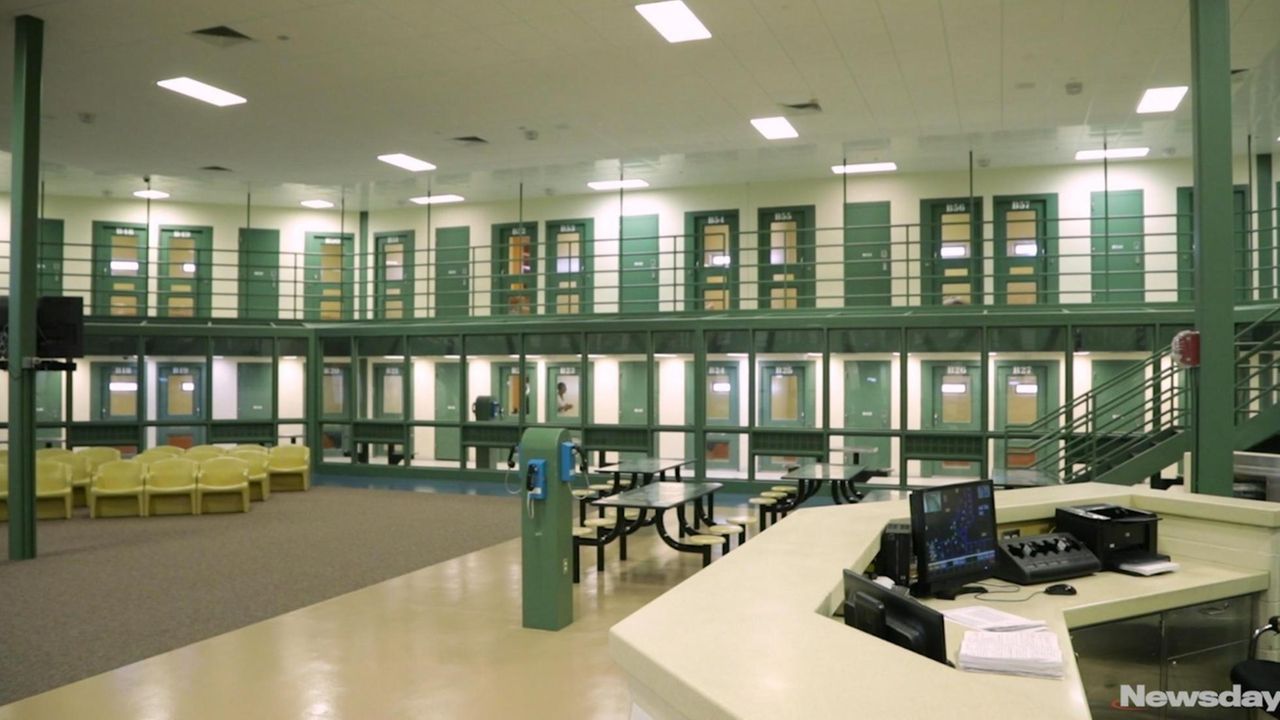 The Suffolk County Sheriff’s Office has started a program that tries to fill the needs of older men jailed at the county correctional facility. The Senior Rehabilitation Pod Program is believed to be the first in the nation to segregate male inmates 50 and older from younger inmates to better concentrate on services more suited to the older inmates' needs. Credit: Newsday / Yeong-Ung Yang

The tai chi classes are in full swing and yoga will arrive soon. By the fall, senior inmates at the Yaphank jail in Suffolk County also will be able to enroll in nutrition classes.

The Senior Rehabilitation Pod Program is believed to be the first in the nation to segregate seniors from younger inmates, Suffolk Sheriff Errol Toulon Jr. said during a recent interview. The program began in mid-July and will start offering a full array of health, counseling and employment services by early September.

“I don’t want to tell people to come to jail, but if you have to be here, this program is good," said Vincent Pisano, 60, of West Babylon, who is in jail because he tested positive for cocaine while on probation for second-degree burglary. "I’m glad I got picked for” the program.

“We realized we had an aged population in our facility of inmates who are over the age of 50,” said Toulon, a former deputy commissioner of operations for the New York City Department of Correction. He succeeded Vincent DeMarco as sheriff in January and runs both the Yaphank and Riverhead jails.

“When you think about the services they need to help in their rehabilitative process, the things they are confronted with when they reach a certain age, they would be better off together,” Toulon said, adding, “Having a group of men facing the same issues together, we think they will be better served.”

The program will offer a wide range of services — everything from 12-step programs to employment counseling to mental health services — dedicated to improving the quality of older inmates’ lives while they are in jail and when they are released, according to Capt. Vincenzo Barone of the sheriff’s office.

“One program will look at recognizing the potential outcomes of choices,” Barone said. “We want to teach them how to stop making the kind of bad choices that led them to being here.”

Toulon said there is no separate line item for the senior pod program, which is funded through the sheriff’s office budget of $166 million for 2018. He said jail officials will start seeking grants and other sources of funding for additional programs.

Last week, seven inmates in Yaphank were over the age of 70, and 33 inmates were older than 60, but not all are enrolled in the program designed for minimum- and medium-security prisoners.

The program is not available in Riverhead, which holds men who are maximum-security prisoners, or to women because there not enough senior women being held at either Yaphank or Riverhead, Toulon said.

Senior inmates in Yaphank, where there are a total of 700 prisoners, said the new program is making a difference.

Pisano said he enjoys spending time with younger inmates — and he still has the speed and stamina to compete and win against men half his age on the jail’s handball court. “They keep me young,” he said.

But when the games are over, Pisano said, he is happy to return to a housing unit with men his own age. Younger inmates, he said, may not fully appreciate how it feels to be separated from family for a long time, or what it is like to be incarcerated when a grandchild is born.

“The young bucks are bouncing off the walls,” he said. “I don’t need the drama.”

Kevin Leonard, 63, of Coram, also is enrolled in the program. He is facing charges — attempted murder, assault with intent to cause physical harm with a weapon, and menacing a police officer — stemming from a domestic violence incident earlier this year.

About two dozen men aged 55 and older are participating in the seniors program, Toulon said, but the number fluctuates as inmates enter and exit the Yaphank jail. The facility is designed to hold inmates who were denied bail or could not scrape up enough money to post bail before trial. Others are serving short-term jail sentences — weeks or months — or awaiting transport to a state prison.

The seniors share a 60-cell pod with younger inmates enrolled in the Veterans Re-Entry Pod Program, which DeMarco created two years ago for those who had served in the military.

Not every prisoner is eligible. Inmates must be 55 or older and designated for minimum- or medium-security facilities to participate in the senior program, according to Barone. Sex offenders are barred.

The Suffolk County Office for the Aging will run many of the programs offered through the senior pod, said the agency’s director, Holly Rhodes-Teague.

Many older inmates struggle with conditions such as diabetes, high blood pressure and heart issues, as well as other health problems, while some suffer from chronic pain. In September, the Office for the Aging will offer the inmates a six-week course designed to help the inmates manage pain, she said, but she hopes the inmates develop a camaraderie that will go beyond easing their aching, aging joints.

The Rev. Charles Coverdale of the First Baptist Church of Riverdale, who has been working with inmates at the county’s jails for 23 years, said the new program helps inmates help themselves.

“I think this is an excellent idea, to promote companionship among people your own age,” Coverdale said. “It gives them a chance to use their skills and use the wisdom to help other older people in the system.”