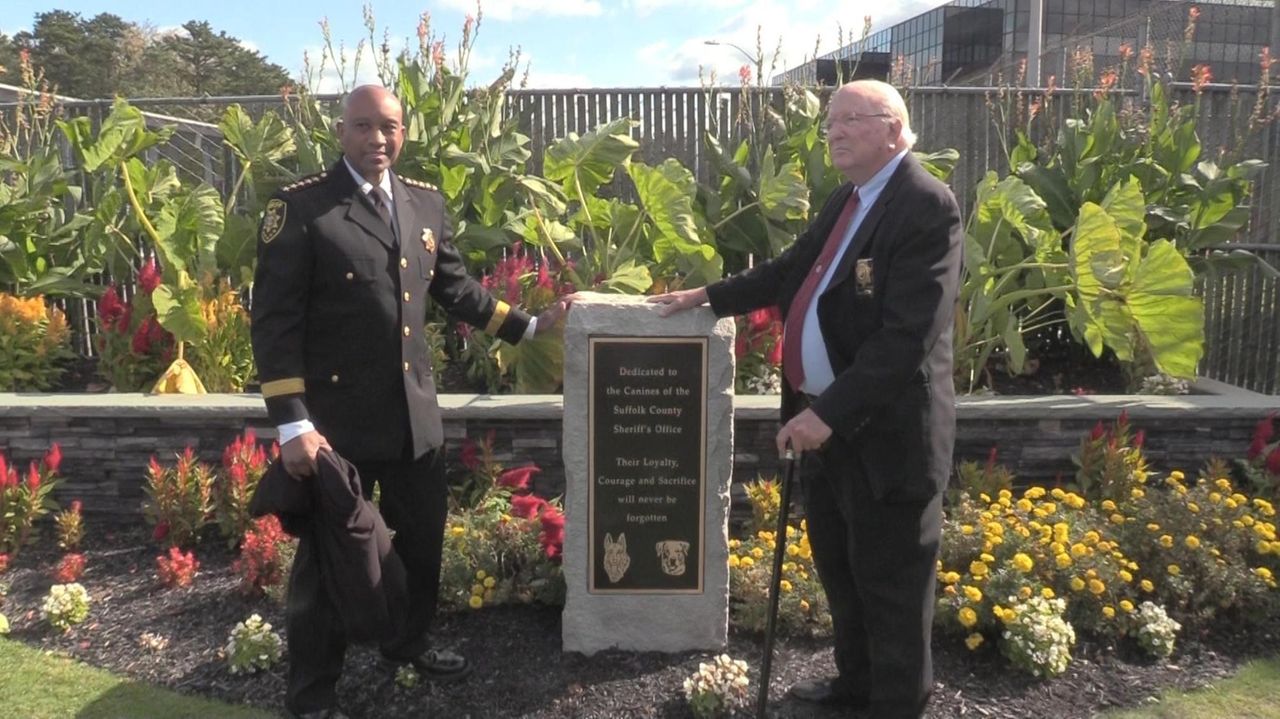 The Suffolk County Sheriff’s Office unveiled a monument outside the Riverhead correctional facility on Thursday honoring twelve K-9s who have died since the department began utilizing the dogs in the 1970s. Credit: James Carbone

They are some of the unsung four-legged heroes who have protected Suffolk residents and their handlers for nearly five decades.

The Suffolk County Sheriff’s Office on Thursday unveiled a monument outside the Riverhead correctional facility honoring 12 dogs who have died since the department first began utilizing the animals on a full-time basis in the 1970s.

Sheriff Errol Toulon Jr. said the department’s six service dogs — three working in the jail to detect drugs and three others in the deputy sheriff’s unit operating across the county — play a valuable role in safeguarding the residents of the county.

“Sheriff K-9 units have been instrumental in hundreds of investigations as well as lending assistance to other law enforcement agencies,” Toulon said at a ceremony attended by dogs and their handlers from both Suffolk and Nassau counties, the NYPD, MTA, Department of Environmental Conservation and the SPCA. “Sheriff K-9 units have been responsible for the recovery of extensive amounts of illegal narcotics and the proceeds as well. Over the years our K-9 units have located missing persons, wanted felons and recovered evidence from cases of assault, robberies and burglaries.”

The granite monument, erected in a flower garden only feet from a red fire hydrant, was built with material from the old Riverhead jail that was torn down roughly 80 years ago. The granite, Toulon said, had been discarded in the woods near a highway department yard but was recovered about 15 years ago.

The plaque, which was created by correctional center inmates, reads: "Dedicated to the Canines of the Suffolk County Sheriff's Office. Their Loyalty, Courage and Sacrifice will never be forgotten" and includes images of two pooches.

The same batch of stone was also used to create a monument in the front of the sheriff's office building dedicated to the county’s deputy sheriffs and correction officers who died in the line of duty. All of the other materials used to create the K-9 monument were purchased using asset forfeiture funds, officials said.

Alan Croce, a former Suffolk deputy sheriff sergeant investigator, said the K-9 program has evolved significantly since its creation in the mid-1970s, spurred by the escape of 21 inmates from the Riverhead jail in a 15-year span. Croce said he arranged for a dog to be trained at the Suffolk County Police Department K-9 School who would monitor the jail for drugs and other contraband,

"It was the mid-70s when you couldn't even bring a dog into the correctional facility," said Croce, a former chairman of the state Commission of Correction, who credited Toulon and his staff for the program's success.

Sheriff's Officer Pete Cuervo has been partnered with his K-9, Ace, for the past 10 months. The pair, who live together, have developed a close bond and watch each other's back, he said.

"These K-9's will do anything for you, that's for sure," Cuervo said. "All they want to do is please you."

While no sheriff  dog has been killed in the line of duty, they face danger nearly every day, said Deputy Sheriff Jason Korte, who has worked and lived with Phillip, a nearly 8-year-old German shepherd, for more than six years.

The animals, he said, are often called to crimes in progress, tracking down a fleeing bank robbery suspect, detecting footprints in the snow or sniffing out illegal drugs — all without any fear for their own safety.

"These dogs are intrepid," Korte said. "As long as you know how to motivate them and can get their drives going, they'll do just about anything you want."