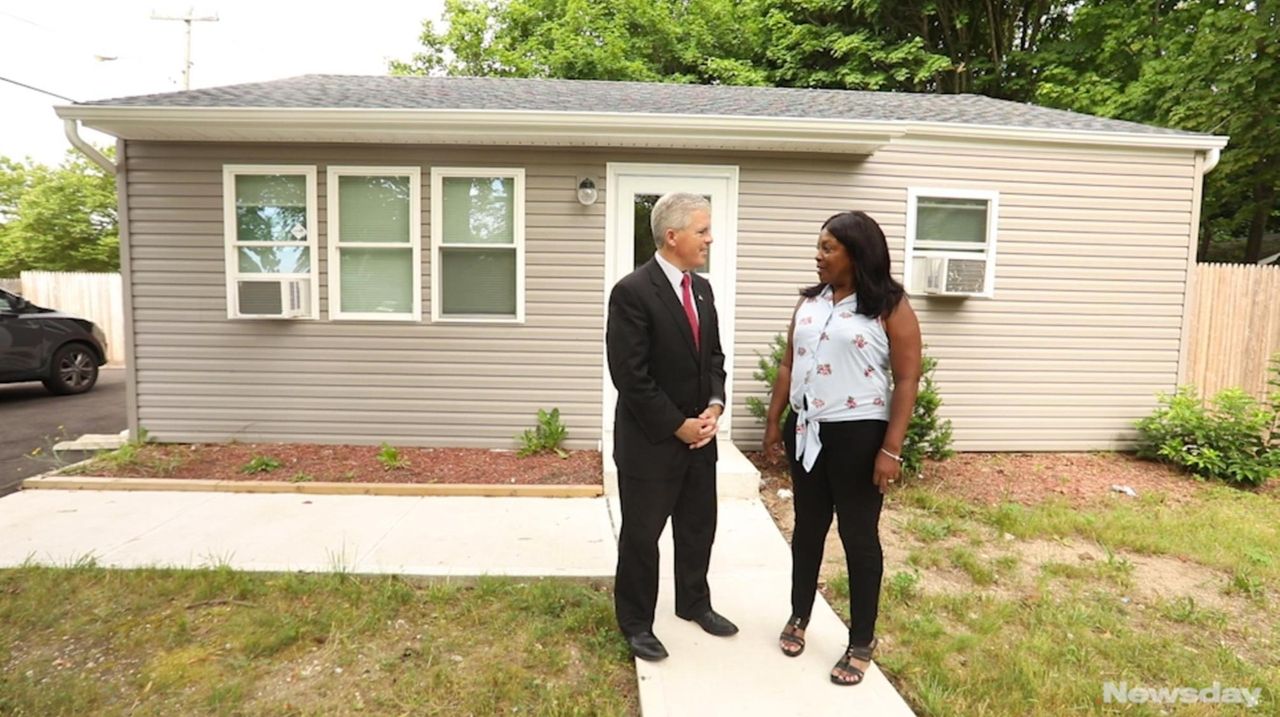 On Thursday, Rebecca Webb of Bellport became a first-time homeowner, after receiving the keys to a house in Bellport, thanks to the Suffolk County Landbank program, which turns vacant homes into affordable housing. Credit: Jessica Rotkiewicz

A dozen former zombie homes in Brookhaven Town are finding new lives as affordable houses for families who previously had never owned the places where they lived.

The nonprofit Suffolk County Landbank, formed five years ago by county officials to buy and resell derelict properties, expects to spend more than $1 million to rehabilitate the former bank-owned houses and sell them to new owners.

Six houses have been rebuilt and sold, and eight more homes are planned or under construction.

Rebecca Webb, a single mother from Brooklyn, said she was "overjoyed" when she took the keys on June 29 to her new house on Doane Avenue in North Bellport. She said she had been on the verge of returning to her native Georgia before her application was accepted by the land bank.

"It made it so I can actually afford the mortgage," said Webb, 55, who works for a Roslyn Heights company that sells medical equipment. "It’s cheaper than what I was paying in rent. ... It really worked out great for me.”

The Suffolk land bank uses funds from a state program designed to help localities buy and resell zombie homes — houses left vacant as a result of foreclosures. The state program is funded by $982 million from settlements with Citigroup and Bank of America over mortgage practices that led to the 2008 housing crash.

“The easy thing is to knock down homes," said Sarah Lansdale, the county planning director and the land bank's president. "The harder thing is to replace them with new homes that add to the quality of the neighborhoods."

The land bank also is developing homes for resale in Islip and Babylon towns. But most of the houses purchased so far by the land bank are in Brookhaven communities such as Mastic and Shirley that were especially hard hit by the 2008 recession.

Brookhaven Supervisor Edward P. Romaine said the town and county work together under an agreement reached last year in which they share funds to rehabilitate abandoned houses.

“We’re making sure that we’re using our powers to make sure these houses are rehabbed," Romaine said. "We think we're off to a good start.”

Applicants must be first-time homebuyers who make between 80 percent and 120 percent of the region's average median income, officials said.

Webb, the mother of two daughters ages 21 and 19, said her one-story home features "a nice-sized bathroom," a security system and appliances that were so new that she removed the plastic wrapping from them herself.

And her new house has something her Brooklyn apartment didn't have — a backyard.

“We can grow tomatoes or something,” she said.

The Suffolk County Landbank is preparing to sell 12 former zombie properties in Brookhaven Town to first-time home buyers. Here are the locations of each property and their current status: