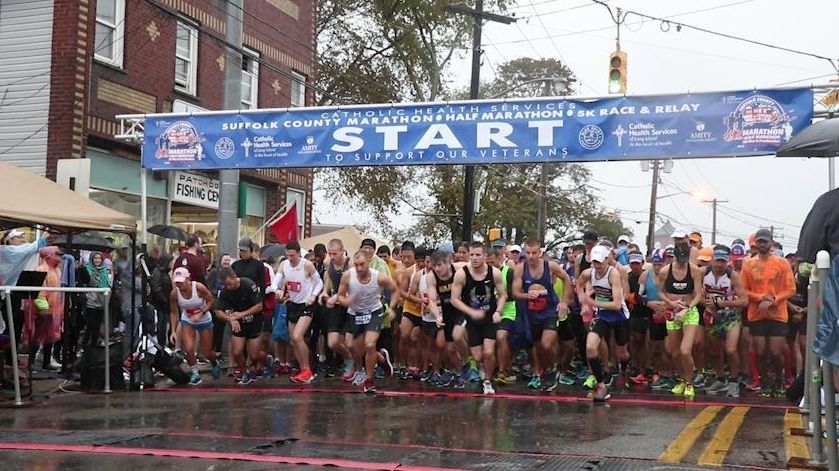 A steady downpour of rain did not prevent many from participating in the Suffolk County Marathon on Sunday, Oct. 29, 2017. Derek Hanson, 34, of Huntington won the male category with a time of 2 hours, 42 minutes, and 3 seconds. It was the fastest time in the three-year history of the event by five minutes, organizers said. Credit: Newsday / Khristopher Brooks; Jessica Rotkiewicz

A Patchogue woman and a Huntington man recorded the fastest race times Sunday during the rain-soaked 2017 Suffolk County Marathon.

“It was a good day,” Hanson said after finishing his run. “I knew there were people here waiting for me and I wanted to see my wife [Francesca at the finish line]. I made it back here as fast as I could.”

Hanson and the other runners braved the wet, windy weather all Sunday afternoon. The diverse crowd used different tricks to keep dry. Some wore ponchos, while others wrapped plastic grocery bags around their shoes or donned large garbage bags. Over 1,700 runners finished.

Long Island, take a look at the scenes just before the Suffolk County Marathon began. People are still running as we speak. Stay tuned folks pic.twitter.com/SFJjOgiE6U

And then there was a group of runners who didn’t cover themselves at all, including Queens resident Krzysztof Rzaca.

“I’m still a beginner runner, so I didn’t bring a jacket like I should,” Rzaca said. “But I don’t think it’ll be a big issue.”

Kelly Mackay of Long Beach was competing in the half-marathon portion of Sunday’s race event. She had been training for two months in hopes of beating her time from last year of 1 hour and 47 minutes.

“I was shooting for an hour forty five this year, but I don’t think it’s going to happen in these conditions,” Mackay said.

Sunday’s race was divided into a 5-kilometer, a half-marathon and a full marathon. In the half-marathon, Leonora Petrina, 35, of Bayport was the female category winner with a time of 1 hour, 20 minutes and 11 seconds. Sayville resident Brian Dalpiaz, 32, won the male category after running that race in 1 hour, 14 minutes and 47 seconds.

Suffolk County officials said they expected more than 2,500 runners from across the world to participate in Sunday’s marathon, which began and ended in downtown Patchogue. Proceeds from this year’s race will go toward helping military veterans in Suffolk. The race, which started in 2015 and serves as a qualifying race for the 2019 Boston Marathon, has raised more than $300,000 for local veterans so far, county officials said.

Just before the race started, physical therapist Armand Diesso gave runners free stretches and soft tissue massages under a tent put up along West Main Street. Diesso, who owns Deer Park-based Performax, said runners would probably have tight hips, lower back and hamstrings after a big race. And because Sunday was wet and windy, runners should take even more precautions to avoid injury, he said.

Runners began lining up at the start just after 8 a.m. County officials shared encouraging words over a megaphone before the marathon began.

Suffolk County Police Commissioner Timothy Sini told runners to let the rain motivate them. Suffolk County Executive Steve Bellone, who ran in the marathon, said there was talk of canceling the event, but “we’re running today for all our veterans who served our country.”

Mackay said two of her friends decided not to run Sunday, but she was still encouraged by seeing so many people show up in the pouring rain.

“Even though this weather wasn’t what we were thinking when we first started planning, it says something about us runners here — that we have a bond and are committed,” she said.

Hanson, Russo win Suffolk County MarathonThere's a code among runners, and it's a pretty simple one — just run.