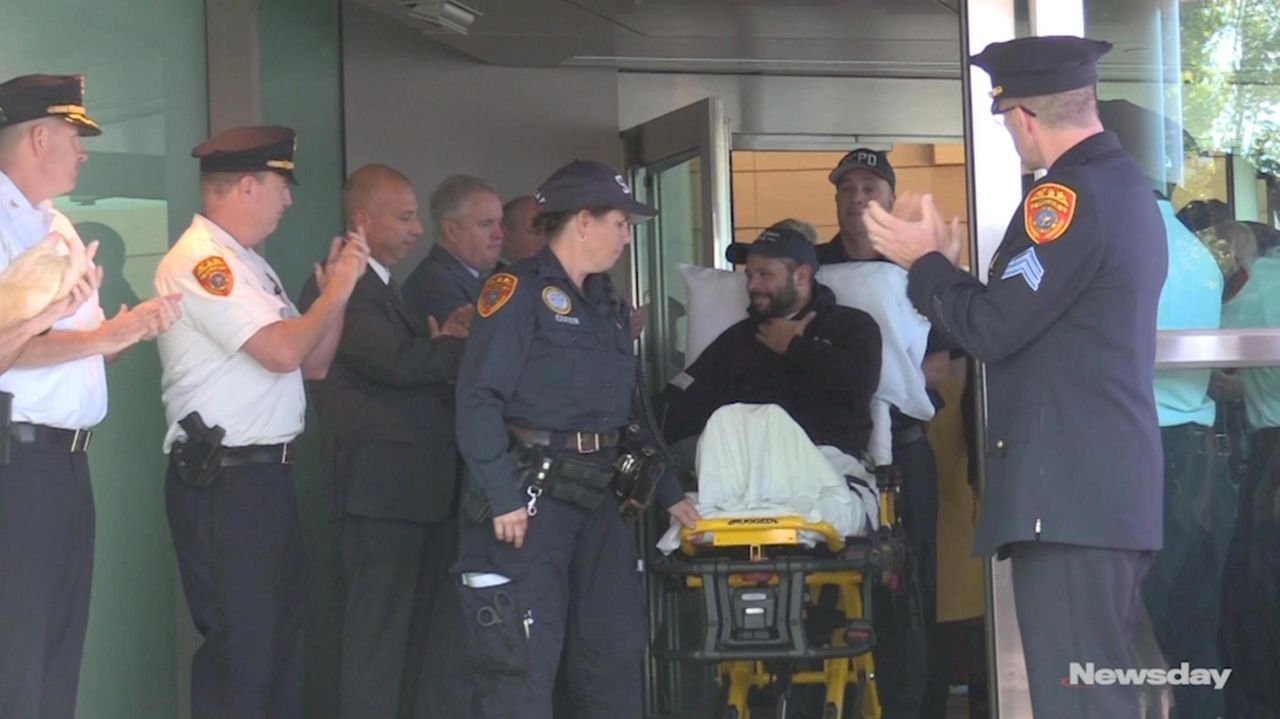 Suffolk police Officer Christian Vidal was so badly injured after a drunken driver crashed head-on into his police car that doctors placed him in a medically induced coma to heal.

But even under heavy sedation, the 34-year-old Coram resident was battling back, fighting to wake up.

"He kept trying to open his eyes," said Dr. James Vosswinkel, chief of trauma surgery at Stony Brook University Hospital. "He didn't want to give up. He was fighting for his life."

On Friday, days after his health took a turn for the better, Vidal was released from the hospital into a veritable crush of police officers and hospital staff waiting outside, clapping and cheering him on.

"Thank you, thank you," said Vidal, shaking people's hands as he sat up in a gurney.

Vidal had been driving his patrol car along Fifth Avenue in Bay Shore when an intoxicated driver struck the officer's marked car head-on Sept. 1, police said. The driver was killed, and Vidal was airlifted to Stony Brook University Hospital with a ruptured aorta, a pelvic fracture and a dislocated hip.

Initially, the officer seemed on the road to recovery, doctors said. He was awake and had a hazy recollection of what happened. When County Executive Steve Bellone visited him, the officer asked for a selfie with him.

His hospital stay became a fight for his life, Vosswinkel said. Vidal was placed on life support and sedated into a coma. Doctors performed a tracheotomy to assist his breathing.

"His body started deteriorating," Vosswinkel said. "I had to make that call to his family, telling them it was touch and go."

Doctors postponed his hip surgery for two weeks as he remained on a ventilator. His family launched into emergency mode. His wife, Cindy, rarely left his side, heading home pretty much just to shower.

He received a steady stream of visits from fellow officers.

Vidal is no stranger to battle. He joined the military at 18, and served three tours in Iraq, family members said. He served as an NYPD officer before joining the Suffolk force in 2014.

"He's always been a fighter," said his sister, Stephanie Farfan, 29, of Central Islip. Speaking of his recovery, she added, "There were a lot of scary moments. But he's a fighter. He's alive."

Days ago, his fighting paid off and his strength began returning, doctors said. He was removed from life support.

"We get up every morning for outcomes like this," Vosswinkel said. "Today is a good day."

Still, Vidal remains weak, hardly able to get out of bed.

When Vidal made his big exit Friday, he was greeted by several hundred police officers and hospital staff. Cindy Vidal was there, hugging and kissing him. His parents, Jose and Gloria Vidal, busily moved among the crowd, thanking everyone for their support and prayers.

"No more crying," he told her.

From somewhere in the crowd came the sound of a quick drumroll and bagpipes burst into a celebratory version of "God Bless America." Two police helicopters zoomed by overhead, another tribute.

Vidal was helped into an ambulance and his wife hopped aboard beside him.

Then they took off to a rehab facility where, family members said, Vidal is eager to regain his strength and get back to work.