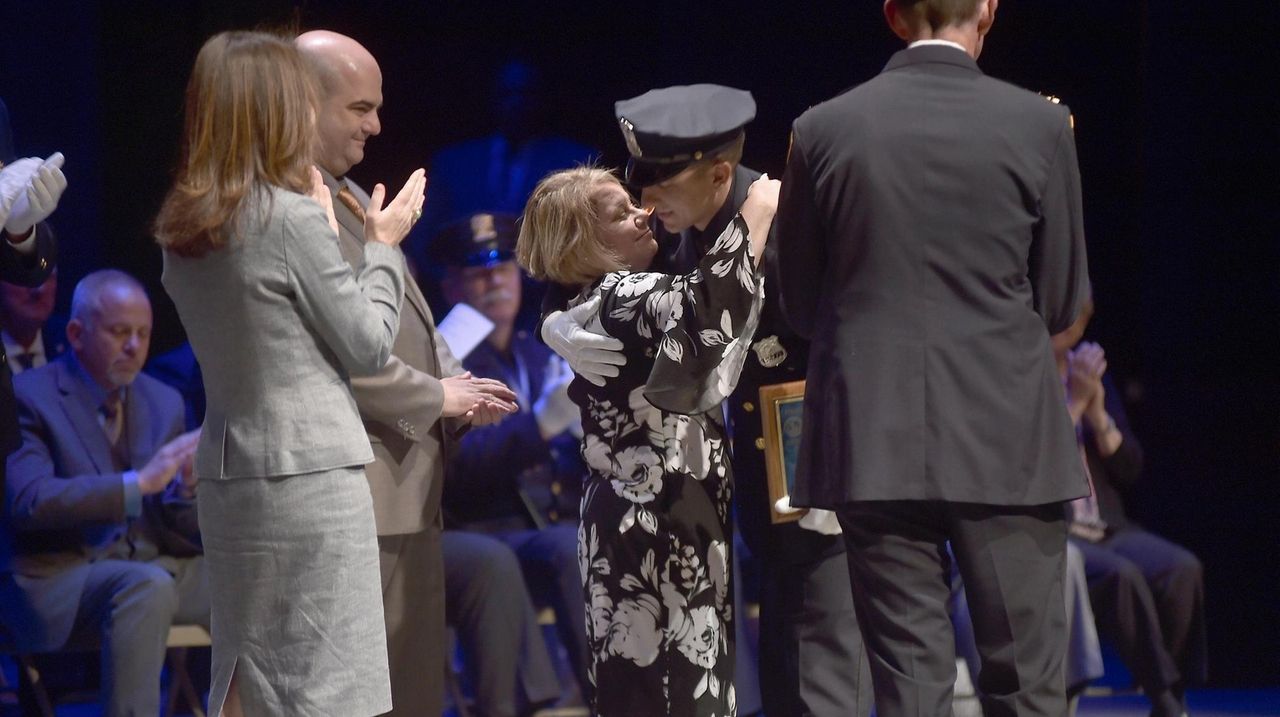 Acts of selflessness, courage and cunning were celebrated in Brentwood on Monday night at the police department’s annual awards ceremony. Suzette Lamonica, whose arm was severed after a Humvee pinned her against another truck at an event in Farmingville in 2017, was there to give thanks to Officer Brian Christopher for saving her life as he received the Exceptional Police Service award, at Suffolk County Community College's Van Nostrand Theater in Brentwood. Credit: John Roca

Suffolk County Police Officer Brian Christopher said he cannot recall what he was feeling when he jumped to the assistance of a gravely injured woman at a festival he was attending while off-duty in 2017.

“I don’t really remember,” he said Monday night. “I just know that I had to do what I was trained to do.”

The woman lost part of her arm, but police said on Monday that Christopher’s quick actions probably saved her life.

The episode was one of many acts of selflessness, courage or cunning celebrated in Brentwood on Monday night at the police department’s annual awards ceremony.

Subduing violent criminal suspects, rescuing drivers from cars sinking into lakes and interrupting attempted suicides were just some of the actions performed by award recipients, who included sworn officers, the department’s civilian staff and members of the public.

“There is one common characteristic among all the recipients, and that is their dedication to this job and to the communities they serve,” Police Commissioner Geraldine Hart said to the family and friends gathered in an auditorium in Suffolk County Community College. “They went above and beyond, not because they want recognition, but because they don’t know how to do it any other way.”

The Commissioner’s Extraordinary Service Award went to Det. Sgt. James Cerone, who has continued to serve in the Identification Section of the department despite being diagnosed with cancer in 2009.

“Det. Sgt. Cerone continues to come to work and be an instrumental and industrious member of the Identification Section,” Sgt. Jeffrey Palen said at the event, calling him “motivational to others.”

Among the civilians who received awards was Michael Pettit of Lake Ronkonkoma, who earned a Public Service Award along with his dog Rex. Police said the pair apprehended a fleeing criminal suspect, who was ultimately arrested for stealing property from six vehicles that night.

“His capture resulted in all of the stolen property being returned to its rightful owners,” Palen said.

Christopher received multiple awards at the event, including the Exceptional Police Service Award for the assistance he provided to Suzette Lamonica at the festival in Farmingville in September 2017.

Both were in attendance at the event, called the Long Island Bacon Bash, when an unoccupied Humvee went out of gear and rolled down an embankment, pinning Lamonica against a food truck.

Sgt. Richard McKillop said at the ceremony that Christopher ran to the scene of the accident and used his belt as a tourniquet on the injured woman, tending to her wounds until police arrived.

Lamonica was in attendance at the ceremony, and hugged Christopher as he received the accolade.

Christopher downplayed what he had done after the ceremony.

“I didn’t do it for the award,” he said. “If it was me, I truly hope that somebody would do the same thing.”