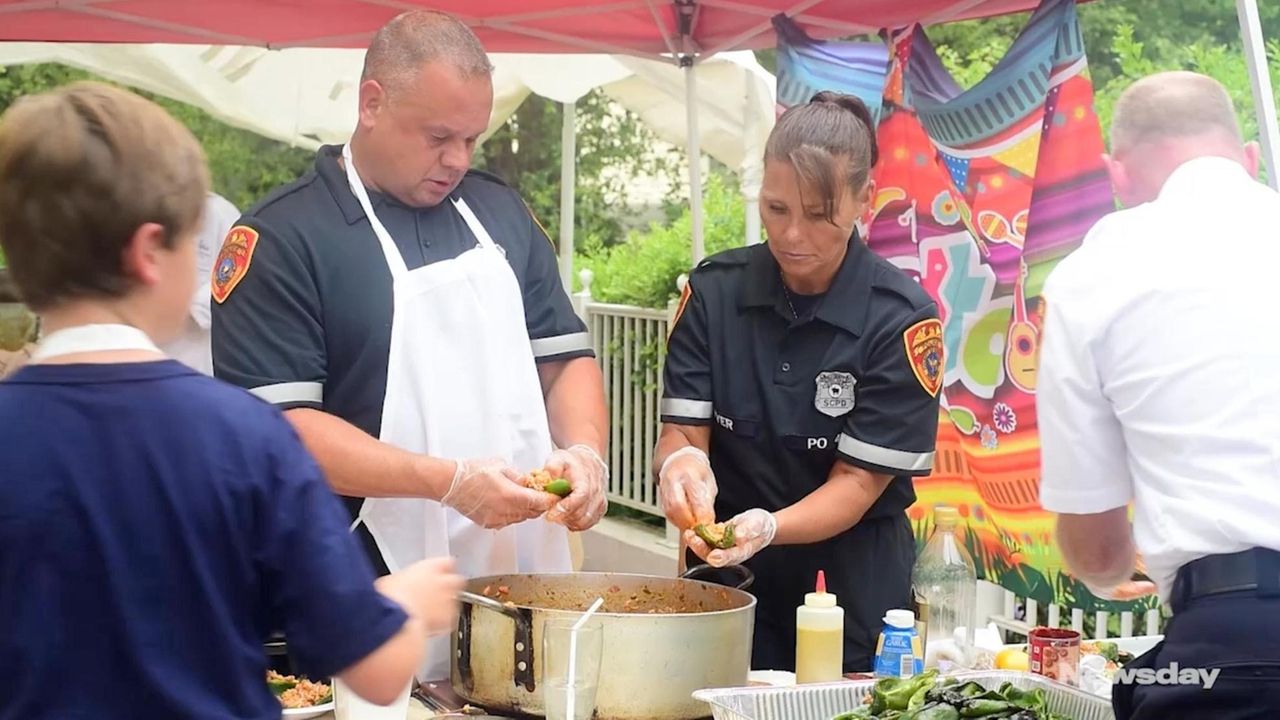 He was up against Atria’s national culinary specialist, Montez Crawford, who prepared a chorizo and pimento cheese-stuffed sweet pepper that he served with a chimichurri marinated chicken breast atop a bed of balsamic, thyme grilled peppers.

This year, Engmann's son Shawn, 11, who's been taking cooking classes, was able to join in and work as his dad’s assistant chef. His job was to plate the dish.

“The Suffolk County Police Department, they do so much for us,” Albanese said. “They’re always here helping us in times of need, and we want to make things fun for them.”

Suffolk County Executive Steve Bellone, a guest judge, arrived just as the tasting began and cast his bet on the police department.

This year, the competition's mandatory ingredient was peppers, and the space was decorated accordingly.

Shiny, jalapeno pepper garland hung from the door frames and a large, inflatable red pepper was passed around for a game of “hot pepper” before the food, grilled in a courtyard outside, was ready to be served.

Shawn poured a pool of charred yellow bell pepper sauce onto a plate, added the stuffed pepper and topped it with crumbled cotija cheese.

Atria staff members passed out small samplings of each competitors’ dish to residents, who were the competition's taste-testers.

“I love it. I love doing stuff right in front of the residents so they can see the fresh produce we use, so they can see how we cook," said Crawford. "I just love what I do."

But, the competition was all in good fun.

“I enjoy cooking, I enjoy watching people enjoy what I cook,” Engmann said. “So, it’s fun.”

Other guest judges, whose votes were given more weight than residents’, included Islip Town Supervisor Angie Carpenter, whose brother is a resident at Atria, and John Walhberg, a board member of the Bay Shore Chamber of Commerce board.

“I have had many occasions to be here at Atria, and I am so impressed with the wonderful feeling of family here,” Carpenter said.