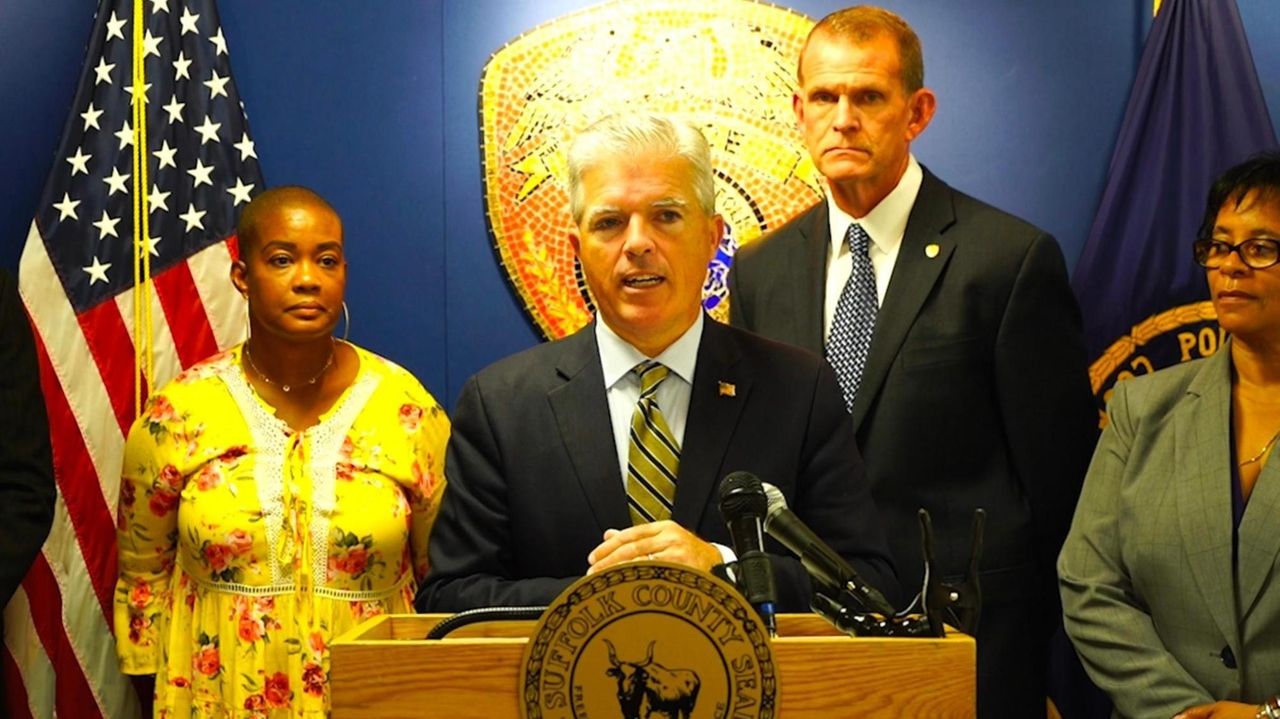 Newsday reported on May 3 that former Suffolk Police Commissioner Geraldine Hart ordered the Internal Affairs Bureau investigation after a sergeant who was seeking promotion to detective sergeant obtained five pages of questions and answers that were prepared for use in an interview-based selection process.

Bellone said outside oversight was added to the detective promotional process after Internal Affairs began probing the allegations.

"After a comprehensive and thorough investigation by our Internal Affairs Bureau, it was determined only these two individuals committed misconduct during this event and as the county executive said, and it's worth repeating, there was found to be no systematic misconduct on the part of our agency," Cameron said Monday. "It was the misconduct solely of two people who will be held accountable for their misdeeds."

Bellone said the 145 candidates for detective, detective sergeant or detective lieutenant were re-interviewed and Cameron brought in a New York State Police investigator to be part of the selection panel. Bellone did not name the officers and declined to specify the discipline, but said a department investigation had determined the misconduct was not widespread and involved two people.

A source with knowledge of the investigation said former Chief of Detectives Gerard Gigante, whose office oversaw the promotion process, was not one of the two people who will be disciplined and was found to have committed "no wrongdoing."

Gigante told Newsday in May his retirement was not connected to the probe.

Gigante, in a statement Monday, said he became aware of the cheating allegation when a "disgruntled detective sergeant candidate" told people "he was annoyed that he didn’t grade as high as he thought he should have on his interview because he possessed some word-for-word questions used for the interviews." Gigante said he "immediately" reported what he heard to Hart, who has also since retired, and the investigation started.

"It was quickly determined that this was an isolated incident that involved two lower ranking members of the Department," the statement said. "Essentially, one sergeant improperly sharing information with another sergeant prior to his interview. At no time was the integrity of the interview process compromised and no one from my office, where the interview process was conducted, was involved in any way. The investigation will confirm this to be true."

The department's 33 new detectives include Sgt. Salvatore Gigante, the nephew of Gerard Gigante. Salvatore Gigante's attempted appointment to the district attorney's squad has been the subject of complaints claiming nepotism and discrimination, including a federal lawsuit.

An attorney hired by the Suffolk County Legislature, which was required to consider a nepotism waiver in order for Salvatore Gigante to assume the role, concluded in 2019 he lacked the minimum qualifications. He sued the Legislature in July, seeking to overturn the vote denying him the waiver.

Bellone called Salvatore Gigante "an outstanding member of this department who unfortunately, in some ways, has been unfairly attacked and maligned."