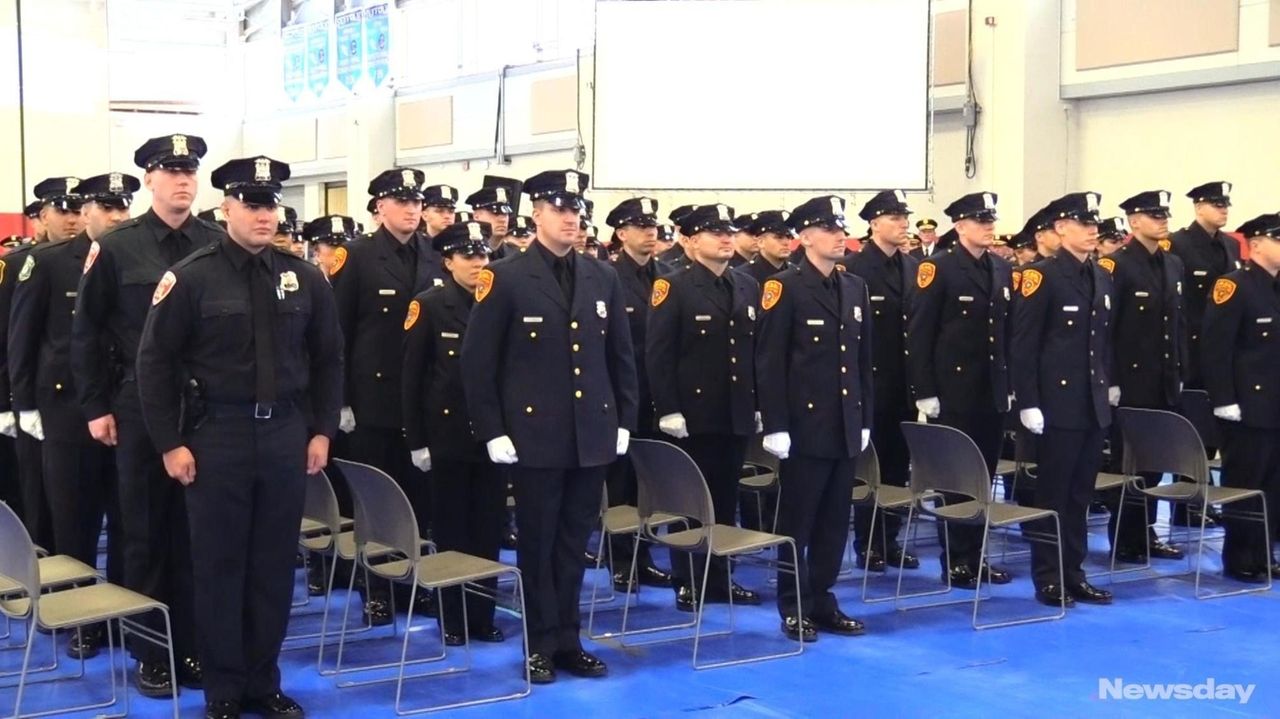 Suffolk County officials, on Thursday, presided over the graduation ceremony of 70 recruits, who completed 29 weeks of academy training and received more than 1,000 hours of instruction on topics including law, emergency medical training, defensive tactics, domestic violence and terrorism. Samantha Ventura is one of the graduates. Credit: James Carbone

After her dad, Rafael Hernandez, was slain in the Dominican Republic in 2014 while breaking up a robbery, Ventura learned that he had wanted her to become a police officer because the job was the perfect fit for her.

On Thursday Ventura, 26, of Brooklyn, fulfilled her father’s dream, graduating, along with 69 other cadets, from the Suffolk County Police Academy and becoming an officer in the county’s police department.

“I did this for him,” Ventura said following the graduation ceremony at Suffolk Community College in Brentwood. “He would be so happy. And proud.”

The class consists of 56 new Suffolk police officers — 45 percent of whom have previous law enforcement experience — and 14 others from police departments across Queens and Long Island, including Southold, Farmingdale, Garden City and Freeport.

An additional 91 cadets graduated from the academy last month. And 33 others began their training in January and are set to graduate in August, officials said.

Suffolk County Executive Steve Bellone said the new officers will face a host of challenges, from an emboldened MS-13 gang to an opioid epidemic that claimed the lives of an estimated 400 people in Suffolk in 2017.

“And you are on the front line in the battle against terrorism here at home,” Bellone said. “With all of these challenges I have great confidence that you will . . . do amazing things for the community.”

Suffolk Police Commissioner Geraldine Hart said county residents do not expect perfection from their officers. “But what they do expect is that you act as their guardian and protector; someone who is trained, ready and dedicated to serving them with competence, bravery and integrity.”

Riverhead Town Officer James Treadwell, 25, of Wading River, got an early taste of police life as a cadet.

While participating in an EMT ambulance rotation in Centereach in December, Treadwell responded to a call for a man overdosing on heroin. Treadwell administered Narcan, a drug used to reverse an overdose, and saved the man, Hart said.

“I’ve always wanted to help people . . . those who can’t help themselves,” Treadwell said.