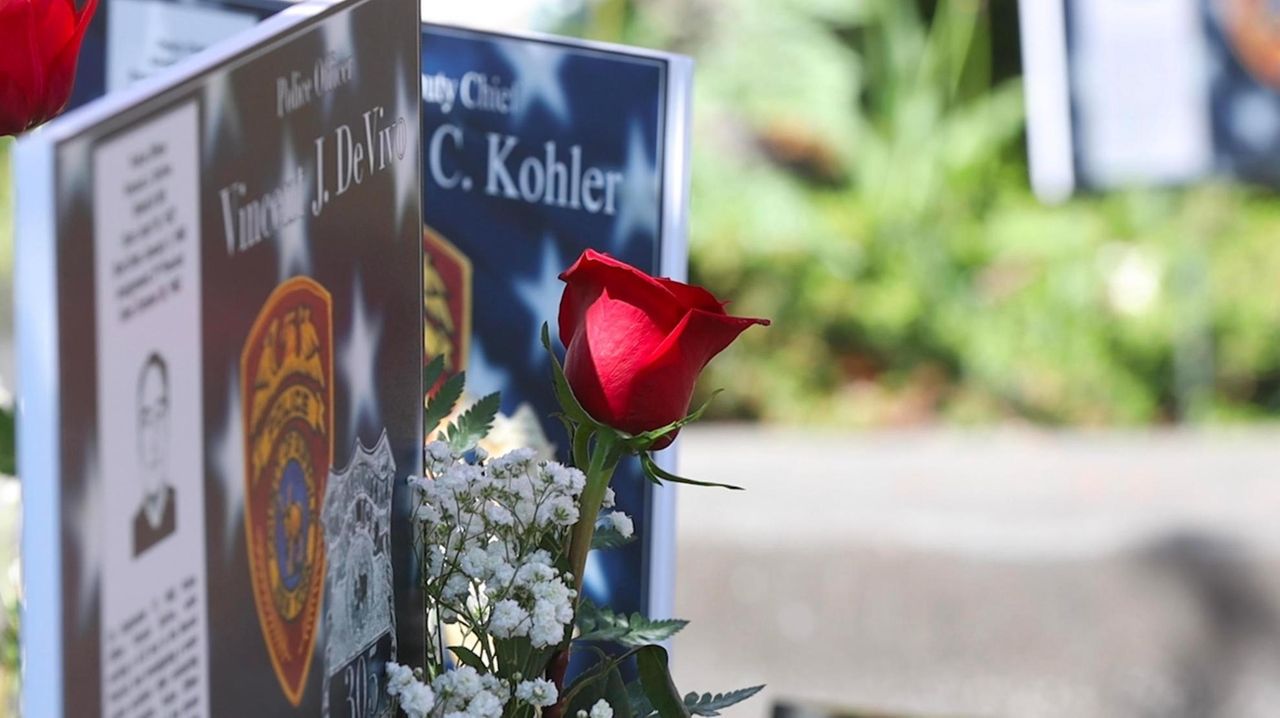 The Suffolk County Police Department remembered and honored the 27 sworn members of the department who died in the line of duty at the department’s annual Memorial Service on Friday in Yaphank. Credit: Howard Schnapp

When the pandemic took hold last year, Suffolk County Police Lt. Robert Van Zeyl, with 36 years of experience on the job, could have called it a career. But Van Zeyl refused to leave the county, and the public, in its time of need.

On Jan. 20, Van Zeyl, 60, became the first, and to date, only active Suffolk police officer to succumb to COVID-19 — the county's first line-of-duty death in more than two years. He leaves behind a daughter Hailey, 15, and a son, Tyler, 14.

On Friday, Van Zeyl became the 27th name added to a memorial stone at Suffolk Police headquarters in Yaphank, honoring officers who gave their life in service of the public.

Tina Zubrinic, who was married to Van Zeyl for 27 years before their divorce last year, said her ex-husband cared deeply about his job and likely contracted the virus while working overtime on New Year's Eve.

"He was a family-oriented person who loved his music," Zubrinic said of Van Zeyl, who was an accomplished singer and guitar player. "All around good hearted. Nothing bothered him. Everything just rolled off his shoulders."

Suffolk Police Commissioner Geraldine Hart, in her last day on the job, said Van Zeyl's sacrifice will never be forgotten.

"This is always a difficult day because it is a true reminder of the dangers that come with a career in law enforcement," Hart said. "We know that life can change in an instant for those that dedicate themselves to protecting and serving. The courage to commit to protect a stranger's life before your own, and in some cases, to make the ultimate sacrifice, is why we are here."

The county Friday also recognized former Suffolk police officer Craig Capolino, who died in 2013 from cancer linked to his service while responding to the World Trade Center attacks. Capolino's name was added to the memorial stone last year but the public ceremony was canceled because of the pandemic.

In 2001, Capolino was an NYPD detective assigned to the Brooklyn North Narcotics Major Case Unit. He worked for three months at the Fresh Kills Landfill on Staten Island, sifting through rubble for remains.

The Emerald Society Pipe Band played "Amazing Grace" while three police helicopters rumbled overhead. Wreaths were laid in honor of Van Zeyl and Capolino while a bell was rung 27 times, once in honor of each officer.

"Police officers face these kids of dangers every day," said Suffolk County Executive Steve Bellone. "They face these dangers so that we can be safe. So our families and our communities are protected. We need to honor that service. We need to honor the sacrifices embodied by the names on this memorial. Not just today but every day of the year."