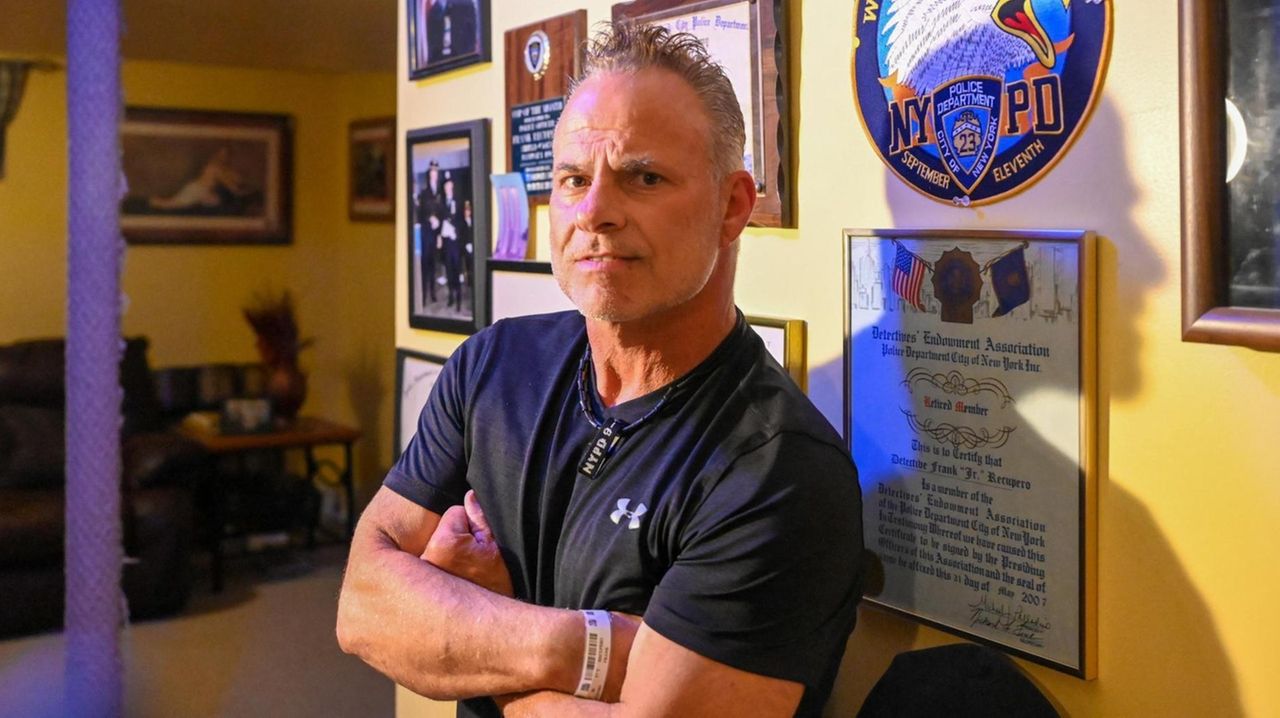 A former U.S. Marine and a retired NYPD detective came to the aid of a Suffolk police officer who was stabbed trying to make an arrest Saturday night in Patchogue. Credit: James Carbone, Stringer News

This story was reported by Daysi Calavia-Robertson, James Carbone, Vera Chinese, Michael O'Keeffe and Gregg Sarra. It was written by O'Keeffe.

A Suffolk County police officer stabbed during a Saturday night struggle with a suspect in Patchogue was saved by his quick-thinking fellow officers, a retired NYPD officer who detained the assailant and a former Marine who used a belt to prevent the injured cop from bleeding to death.

The three-year police veteran, whose name has not been released by Suffolk police, was in critical condition Sunday evening at Stony Brook University Hospital.

"Our officers put their lives on the line every day," Suffolk Police Commissioner Geraldine Hart said Sunday. "You leave home for a tour and you don’t know what can happen. We are hopeful this officer makes a good recovery."

The suspect, Jonathan Nunez, 25, of Centereach, was arrested and charged with aggravated assault upon a police officer, driving while intoxicated and resisting arrest. Police said Nunez stabbed the officer in the leg during an altercation on South Ocean Avenue, rupturing an artery.

Hart praised officers who provided aid to the injured cop at the scene, as well as a sergeant who decided to have the officer transported to a hospital by patrol car, rather than wait for an ambulance.

"Smart decisions by the responding officers may have saved his life," Hart said.

The surgeon who operated on the officer Sunday agreed that the care the cop received, starting from the moment the tourniquet was applied at the scene by a resident who had served in Iraq, saved his life. The officer's femoral artery and vein was cut, which can quickly cause a person to bleed to death, according to Dr. James Vosswinkel, the head of trauma at Stony Brook University Hospital.

"This is a fatal injury in many people," Vosswinkel said. "If it wasn’t for a lot of good, expeditious care, he probably wouldn’t be with us right now."

The injured officer was in a marked patrol car late Saturday when he saw a 1999 Mercedes-Benz driving erratically with no headlights southbound on South Ocean Avenue, police said. When the officer attempted to stop the vehicle, the driver, Nunez, crashed into a 2004 Nissan at the intersection of South Ocean Avenue and Brook Street.

Nunez attempted to flee on foot but instead got embroiled in a struggle with the cop on the lawn of a South Ocean Avenue home, where Nunez stabbed the cop, police said.

Patchogue resident and former Marine Guillermo Sandoval said he heard a loud crash and then saw the police officer chase Nunez into his yard. When Sandoval stepped outside, he saw the officer and the suspect fighting.

Retired NYPD detective Frank "J.R." Recupero, meanwhile, said he was heading home from dinner with his girlfriend when he saw the Mercedes speed by, followed by a police cruiser. He, too, heard the crash and rushed to the scene, where he saw the suspect run into Sandoval’s yard.

Recupero said he saw the officer use his Taser on Nunez, and then both the cop and the suspect fell to the ground. He tackled Nunez before the suspect could flee, he said. Nunez screamed during the struggle, he added, and tried to bite him.

"It’s a fight, it’s a very scary fight," Recupero said. "This guy is really strong. I didn’t expect that."

The ex-NYPD cop said he heard the injured officer say he had been stabbed. The fallen officer "looked white as a ghost."

Recupero said he locked his arms around Nunez to restrain him for what seemed like "forever," but when he heard sirens in the distance, he knew help was on the way.

Sandoval said he saw the injured officer struggling in his yard and that's when his military training "just kicked in." He used a belt as a tourniquet to slow the flow of blood from the cop’s badly injured leg, and later helped carry the officer to the patrol car that took him to the hospital.

Noel DiGerolamo, president of the Suffolk Police Benevolent Association, said: "We are praying for our officer … We are lucky we did not lose him."

The injured officer was transported to Long Island Community Hospital in East Patchogue and later transferred to Stony Brook University Hospital, where he underwent emergency surgery for a ruptured artery. He was in critical condition Sunday, but officials said he is expected to recover from his injuries.

Without the care he received from Sandoval and the responding cops, the officer could have gone into irreversible shock in less than 20 minutes, Vosswinkel said.

"You can’t reverse the cells shutting down," Vosswinkel said. "Essentially, you can’t save their life."

The hemorrhage has been repaired but the officer is being monitored for complications associated with shock and losing vast amounts of blood. Potential risks include kidney damage and cardiovascular collapse, Vosswinkel said.

"We are very happy he is doing better," Suffolk County Executive Steve Bellone said of the injured officer. "He is not out of the woods yet, but we are grateful that the actions of these officers and these bystanders saved his life."

Nunez was admitted to Long Island Community Hospital in East Patchogue for treatment of injuries and will be arraigned at a later date. No information on his condition was released Sunday night. Police said the knife used in the attack was recovered.

The driver of the Nissan, Luis Tayupanda, of Patchogue, was transported to Stony Brook University Hospital for treatment of non-life-threatening injuries, police said.

Suffolk police officers receive emergency medical training and are certified EMTs when they leave the academy.

"That training pays off in situations like this," Hart said.