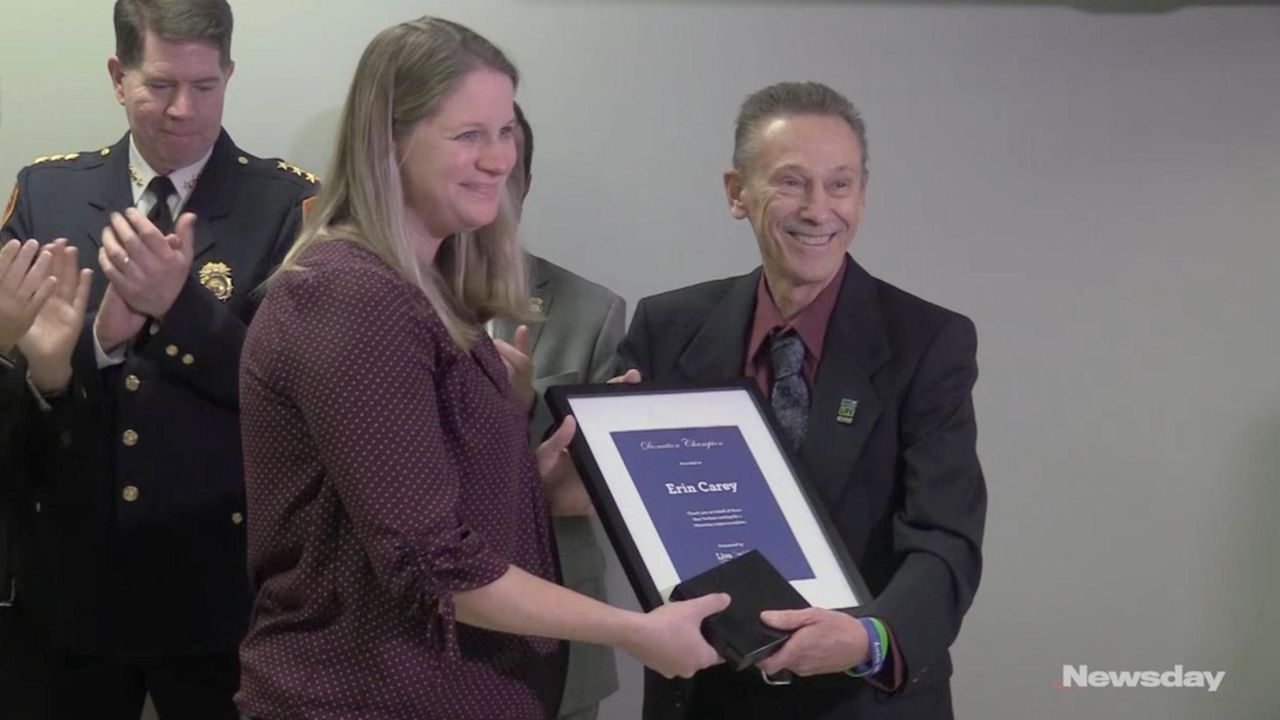 Suffolk County police officials honored two Highway Patrol cops Monday who helped save a life earlier this year by rushing a donated liver from Stony Brook University Hospital to a transplant recipient more than 50 miles away in Manhattan.

Also speaking at Monday's news conference at Suffolk police headquarters in Yaphank was a Riverhead man transported by a Suffolk police helicopter to a hospital in Westchester for a heart transplant in 2016  who thanked the police department and Stony Brook air medic Erin Carey for giving him a second chance at life.

“Life is good. Organ donation is good,” said transplant patient Ed Schaefer, who calls himself “a 67-year-old man with a 35-year-old heart.”

The transport of the donated liver earned accolades from Suffolk Police Commissioner Geraldine Hart for Highway Patrol Lt. Peter Reilly and Officer Steven Turner for the roles they played  in saving the recipient on a stormy evening in June.

“We are happy to hear that the transplant was a success and the recipient is doing well,” Hart said. “I’d like to commend the officers who made a difference in a stranger’s life.”

Helen Irving, the chief executive officer of LiveOnNY, said the advocacy organization for transplant donors and recipients called for Suffolk police assistance after Stony Brook surgeons who recovered kidneys from a donor’s body determined that the liver was suitable to be transplanted, too.

The LiveOnNY staff quickly located a patient who needed a liver, but the patient was in very poor health and the organ needed to be delivered to NewYork Presbyterian/Weill Cornell Medical Center in Manhattan within hours. The ambulance service the organization uses to transport organs was three hours away in Westchester County, Irving said, so LiveOnNY officials turned to Suffolk police for help.

The department could not transport the liver by helicopter, because of inclement weather, so Reilly contacted Turner and told him he needed to pick up the organ and the transplant team from Stony Brook and drive them through 55 miles of Long Island and New York City traffic within two hours.

Suffolk police told the NYPD and Nassau authorities that Turner would be racing through their jurisdictions with lights blazing and sirens screaming to save a life, but apparently the message didn’t make it through the Midtown Tunnel, Turner said.

“It is so rewarding to see him doing so well,” Carey said after Monday’s news conference.

New York State ranks last in the nation in percentage of registered organ donors, according to LiveOnNY. Thirty-five percent of New Yorkers are registered as organ donors, compared to 56% across the United States.

More than 112,000 people in the United States — and almost 10,000 people in New York State — are waiting for transplants, according to Irving, who said a patient waiting for an organ in the state dies every 18 hours. The vast majority of patients require liver or kidney donations.

Schaefer said his new heart has given him more than a new life — it has also given him purpose. He makes regular appearances on college campuses, where he urges students to register as organ donors.

A few months after he was released from the hospital, Schaefer said, he wrote a letter to the family of his heart donor — a Long Island dad who was 32 years old when his heart was recovered — to thank them for the gift he had received. Eventually, LiveOnNY arranged for him to meet the man’s family at an event at Westchester Medical Center.

“In a second, I knew this would not be a one-time experience, that we would become family with this family” Schaefer said. “My donor’s mom came over. She wanted to hear her son’s heartbeat. She put her head on his heart, on my chest, and listened.

“That box of tissues in that room emptied very quick that day. Ever since, we have been family,” he added.