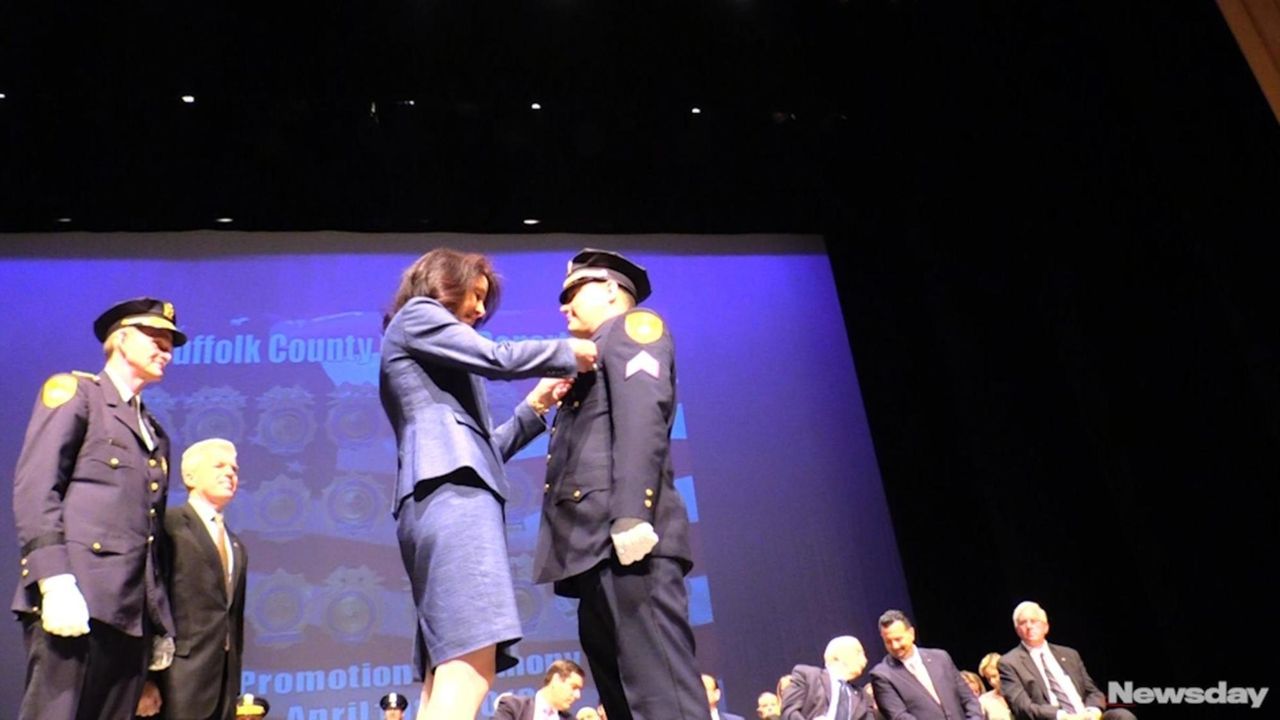 Hart, an FBI veteran who took the helm of the Suffolk County Police Department Monday, said it was important to recognize the tribulations of family members whose loved ones pursue careers in law enforcement.

“First and foremost, to all the families, we recognize the sacrifice you make each and every day,” Hart said during the promotion ceremony at the Suffolk County Community College Brentwood campus, the home of the department’s police academy.

“We know how important and integral the support we receive from you, our loved ones, is to our success. So to the spouses, the children, the siblings, the parents and all the loved ones of our officers, a big thank you,” added Hart, the first female police commissioner in Suffolk County history.

Scores of family members joined Suffolk police brass, elected officials and union leaders at the promotion ceremony for 24 officers, including Suffolk County Executive Steve Bellone and District Attorney Tim Sini, who was police commissioner for about two years before being elected as Suffolk’s chief prosecutor in November.

The ceremony was definitely a family occasion for Thomas M. Kenneally Jr., a 27-year SCPD veteran who was promoted from captain to deputy inspector. His wife Kathleen Kenneally, a sergeant in the Seventh Precinct, and his brother Andrew, a sergeant in the Fifth Precinct, stood with Hart as she gave Kenneally his new badge. His late father was a longtime Suffolk police officer and other relatives work for the department, too.

“It’s a great place to work,” Kenneally Jr. said after the ceremony. “Great cops, great bosses. I love this job.”

Bellone selected Hart in February, citing her experience in law enforcement. Hart is a 21-year veteran of the FBI and the former senior supervisory resident agent of the bureau’s Long Island office. She also headed the Long Island Gang Task Force, the local-federal partnership that has led the battle against MS-13 and other criminal organizations.

Bellone said he had police officers’ families in mind when he appointed Hart, who is awaiting confirmation by the Suffolk County legislature.

“As family members, I know the sacrifices you make and in making this selection I wanted to make sure that we would have somebody as police commissioner that honors — by what she does, how she acts and who she is — the sacrifice you make and that your loved ones make every day for our community and county,” Bellone said.

Bellone thanked police for turning Suffolk County into “one of the safest places in the United States of America.”

Hart said after the ceremony that crime continues to drop in Suffolk, citing statistics from the first quarter of 2018, but she said police still have work to do. She said the opioid crisis that led to the deaths of more than 400 people last year remains a challenge, and so does MS-13, the street gang that has been tied to more than two dozen murders on Long Island in recent years.

Hart, who grew up in Northport and lives in Sea Cliff, said she is also concerned about active shooter situations in schools or other public places.

She told Newsday that she plans on undertaking a top-to-bottom assessment of the department. She met individually with commanders of the police department’s seven precincts for about half-hour each on Monday. She is scheduled to visit the marine and aviation bureaus later this week.

The new commissioner told the promoted officers that every one of them is critical to the department’s mission. “We are not just here to celebrate,” she said. “We are here to take a moment to reflect on our duties and responsibilities.”

Top cop nominee has MS-13 plan of attackGeraldine Hart, a 21-year veteran of the FBI, was tapped by Suffolk County Executive Steve Bellone to serve as police commissioner.