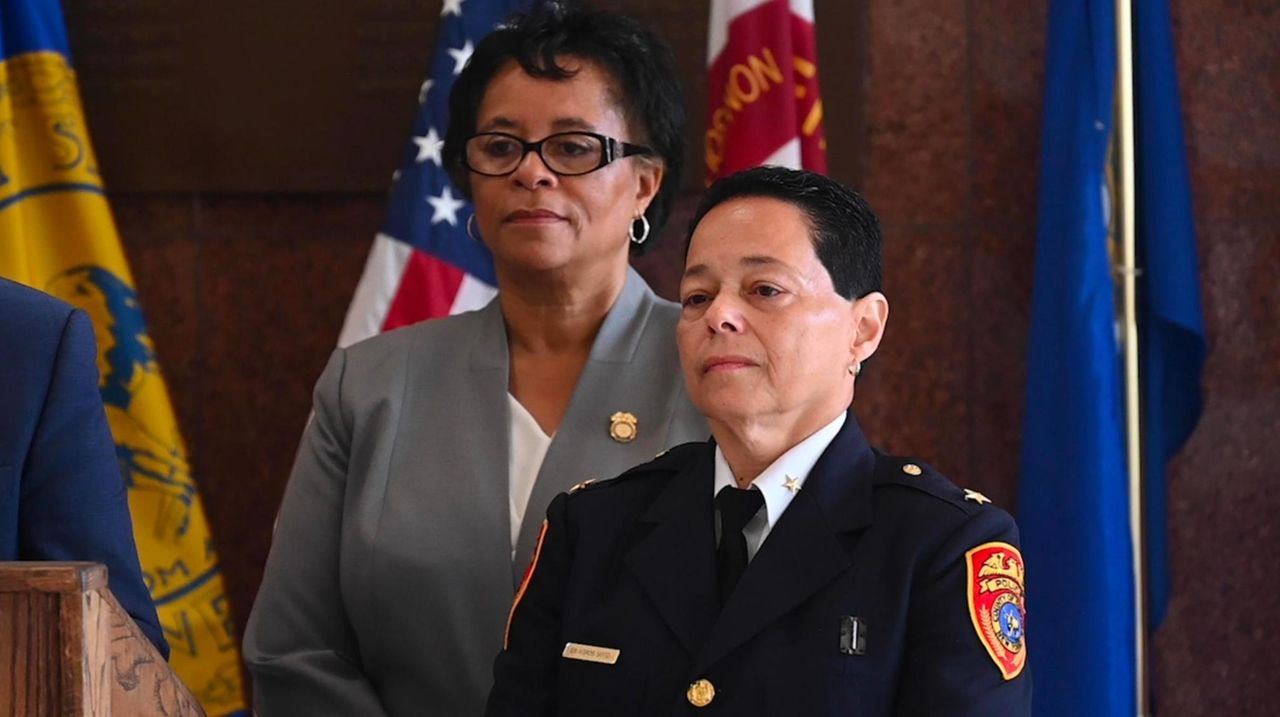 On Monday Suffolk County Executive Steve Bellone announced the promotion of the first Hispanic police chief, Milagros Soto. She will be a one-star, deputy chief and the commanding officer of the Internal Affairs Bureau. Credit: James Carbone

Suffolk County’s police department on Monday named Milagros Soto as its first Hispanic chief, a historic promotion in the largely white department that has struggled to diversify despite a federal mandate to do so.

Soto, a 33-year-veteran who for the last 2 ½ years has worked in the police commissioner’s office overseeing the Community Relations Bureau as well as other commands and as a liaison during the state-mandated police reform process, will be only the third woman to achieve the rank of chief. Soto will be a one-star, deputy chief and the commanding officer of the Internal Affairs Bureau.

Soto, previously an inspector who received her new shield from County Executive Steve Bellone during a news conference at government headquarters in Hauppauge Monday, said she was "humbled and honored" to become a chief.

"I have worked diligently throughout my career and my efforts have been recognized by my superiors and colleagues alike but I know that it has been through the tireless encouragement and support of my family as well as the work ethic that was instilled in me as a child that has brought me here today," Soto said.

Bellone called Soto a "trailblazer," detailing how she rose through the ranks and was often the only woman or Hispanic person to hold those titles. Soto is "of the highest integrity," Bellone said.

As part of her role commanding the Internal Affairs Bureau, Soto will oversee the process of including the county’s Human Rights Commission into internal affairs investigations – a product of the county’s police reform plan.

The police department has been slow to diversity, with roughly 85 percent of the department identifying as white, while the county population as a whole is 68 percent white.

The police department remains majority white despite a 1980s federal consent decree mandating the hiring of more people of color in response to allegations of discrimination against Black, Hispanic and female police officer candidates. Suffolk police and the DOJ also entered into a monitoring agreement in 2014 in response to complaints from advocates over the department's treatment of the Latino community in the wake of the 2008 hate-crime killing of Ecuadorian immigrant Marcelo Lucero, who was fatally beaten by a group of white youths in Patchogue.

Newsday reported earlier this year that Black and Hispanic applicants are less likely to be hired by both the Nassau and Suffolk police departments, which rejected candidates of color at rates that exceeded federal standards used to uncover evidence of discrimination.

Soto, a Lower East Side native, entered the Suffolk police academy in 1988 and then worked patrol in the communities of Smithtown and Commack. She then worked as a supervisor in the Sixth Precinct in Coram and in the department’s 911 call center. In 2010, she went to Internal Affairs as an investigator and three years later was promoted to lieutenant.

She made a brief detour to the Sixth Precinct’s Crime Section, working as the commanding officer in July 2015, but went back to Internal Affairs in January 2016 when she was promoted to captain. Soto supervised and managed the Internal Affairs investigation into former Sgt. Scott Greene, who was convicted in of shaking down Hispanic drivers for cash. Promoted to deputy inspector, Soto, a Spanish speaker, was the second-in-command of the Third Precinct in Bay Shore, which covers the largely Hispanic communities of Brentwood and Central Islip.

In 2019, she went to work in the commissioner’s office where she oversaw Community Relations, the Public Information Bureau and served as a liaison to the district attorney office’s Conviction Integrity Bureau.

Soto said her own career was inspired by her brother, a retired NYPD officer.

"As a 10-year-old, I admired and was inspired by my brother, who was one of the very few Hispanic police officers working on the Lower East Side of Manhattan. Today, I hope to inspire others – maybe a few 10-year-old girls and boys – to consider a career in the noble profession of law enforcement."

Suffolk officer who almost died promoted to detective"It's definitely a miracle," injured police officer Christopher Racioppo said of his survival. "There were so many pieces that kind of fell into place."