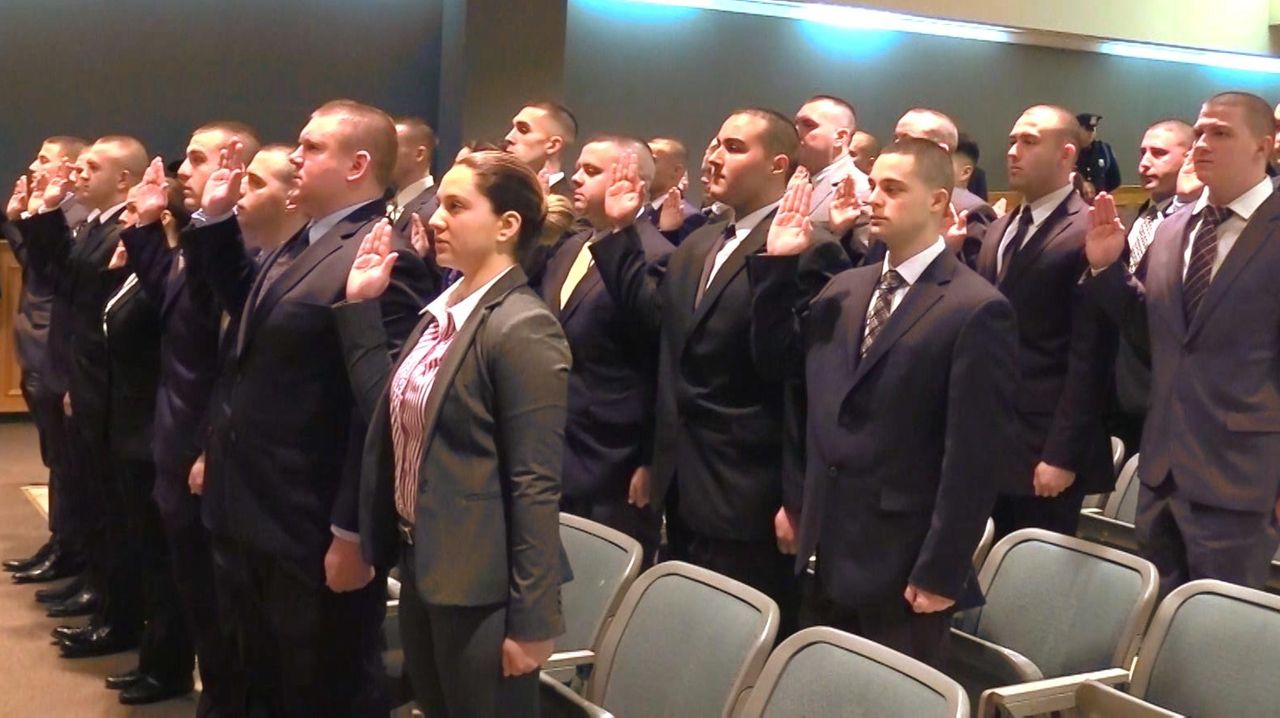 Ten military veterans are among 33 Suffolk County Police Department recruits sworn in Monday, Jan. 29, 2018, officials said. The recruits are expected to hit the streets in April, May and August. Credit: James Carbone

Nearly a third of Suffolk County Police Department’s 33 recruits who were sworn in Monday at its police academy in Brentwood had served in the United States armed forces, officials said.

In addition to the 10 veterans, the first group of 2018 recruits also included three former NYPD officers and three sons of current and retired Suffolk County officers.

Four of the 33 recruits are fluent in Spanish, part of the department’s efforts to diversify its ranks as required under a Department of Justice consent decree to hire 10 percent of Spanish speakers from the Civil Service test.

Five of the recruits are women, according to Suffolk police.

“I appreciate the fact that each of you is stepping forward today, and willing to serve in this capacity,” Suffolk County Executive Steve Bellone told the rookies during the brief swearing-in ceremony. “Serving as a police officer is an incredible responsibility. At any given moment, you could face life-or-death decisions in this position.”

These newcomers — sworn in at the police academy on the grounds of Suffolk County Community College — join one of the largest police departments in the country with 2,534 active sworn members.

Eleven percent of the force is female; 9.8 percent Hispanic; 2.6 percent African-American; and 1.1 percent Asian, according to the department.

Craig Capobianco, 22, one of the recruits who is a Marine Corps veteran, said he wanted a job that offers the same type of camaraderie and fellowship he found while working for the military.

“Serving is just in my nature,” Capobianco said. “It’s something I take a lot of pride in.”

Breanna Stanco, 22, said she is excited and eager to begin the 30-week training and get to work.

“It was always my dream to better the community I live in for myself, for future generations, and for the residents now,” she said.

“We’re just happy to get the next group of recruits and push forward,” Barry said after the ceremony. “I think this is probably the first time in a long time that we’ve had three academy classes in at the same time.”

Recruits from all three classes are expected to hit the streets in April, May and August, Barry said.