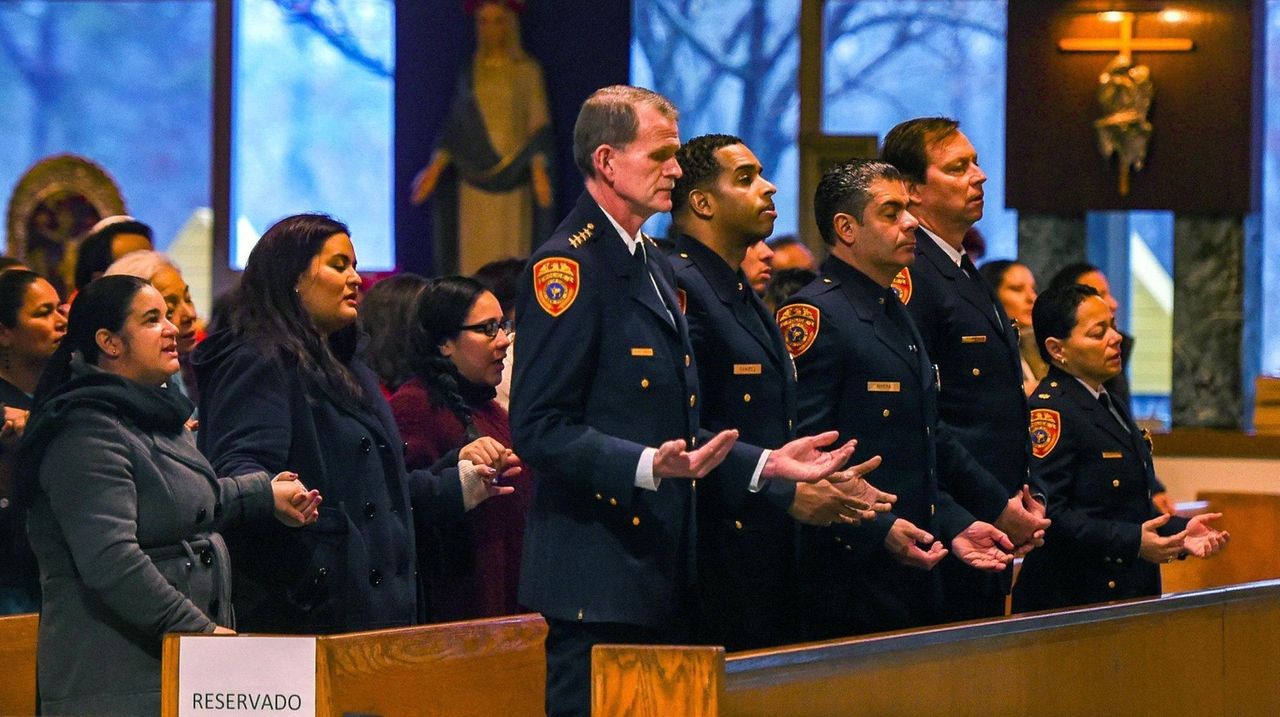 Suffolk police Chief of Department Stuart Cameron attended Mass at St. Anne's Church in Brentwood on Sunday and addressed parishioners in Spanish, which he has been learning. Credit: James Carbone

Stuart Cameron, the highest-ranking uniformed officer in the Suffolk County Police Department, has been studying for months, listening to tutorials in his Yaphank office, at home and in his unmarked SUV as he darts around the county responding to emergencies.

He’s not cramming for a police exam. The four-star chief of department is learning to speak Spanish. And on Sunday morning, he flexed his newly acquired skills, addressing hundreds from the pulpit during Mass at St. Anne's Roman Catholic Church in Brentwood, as part of an ongoing effort to improve relations between the police department and the Latino community.

"I know some people are afraid of the police in Suffolk County — that really breaks my heart," said Cameron, a 34-year-department veteran. "Our department truly is here to help people. So I want to try and personally get that message out by giving it myself and taking time to learn Spanish."

Cameron, who began studying the language eight months ago, kept it simple during his public debut during the end of the nearly two-hour Mass. Accompanied by some of his colleagues — Deputy Chief Robert Waring, Deputy Insp. Milagros Soto and Officers Eiffel Ramirez and Peter Rivera — Cameron introduced himself, explained his efforts to learn Spanish and promised to come back when he improves in order to have meaningful conversations.

"Yo soy su jefe," which means "I am your chief," Cameron told the congregation during Sunday's 9 a.m. Spanish-language Mass, and later joked about "mi mal español" — his bad Spanish — eliciting applause and laughter from the parishioners.

It was a small step in what has been a major department effort to ensure non-English speakers can access police services. Since 2014, the U.S. Department of Justice has been monitoring the department on a range of issues connected to its treatment of Latinos, including providing language assistance.

In its most recent report in October, the DOJ said the department had achieved “substantial compliance” but had failed to fully implement a language access plan, provide translated forms and documents on its website.

But the report praised the department for giving officers tablets to access the department’s Language Line, which provides real-time translation services in over 200 languages.

Last year, the 2,500-member Suffolk police department had 75 officers who were certified as bilingual in Spanish and English and another nine officers who completed testing and certification and are now authorized Spanish interpreters.

Soto, the highest-ranking Spanish-speaking woman in the department and the second in command at the Bay Shore-based Third Precinct, applauded Cameron's efforts.

"I could hear the reactions from the people," said Soto, a native Spanish speaker. "They were very surprised and very happy. As you could see, people were clapping. It meant a great deal. ... I think that touched everyone at this service."

George Barhona, a truck driver from Farmingdale who attended Sunday's service with his family, approached Cameron afterward and complimented his efforts.

"It's surprising for me because it's really hard for him because he's an old man," said Barhona, 35. (Cameron is 56 years old.)

Barhona added: "He tried. It's good."

Cameron acknowledged it has not been easy to pick up Spanish at his age, and said he wished he had studied it when he was younger. He took German in high school.

"I'm not an intuitive language speaker," said Cameron, who marveled at the heavy turnout, especially in comparison to the Lutheran church he attends. "I'm struggling for every move I make."

The Rev. Stanislaw Wadowski, a pastor at St. Anne's who speaks fluent English, Polish and Spanish, said he was "impressed" with Cameron's skills and his outreach to the community.

"People just need to be affirmed that police are friendly to us, they are here to help us," said Wadowski. "I'm grateful for that presence and giving us a sense of security."

Cameron admitted that when he started his Spanish-language journey 241 days ago, the extent of his knowledge was the greeting "Hola." He said he also has gained an empathy for immigrants who try to learn English. He uses a program on YouTube and an application on his cellphone and dedicates a few hours to studying every day, he said.

"When people say, 'Why don't these folks just learn English,' they're probably in many cases working more than one job ... it's very, very hard to learn another language. It's been a challenge. But I'm committed to keep going."