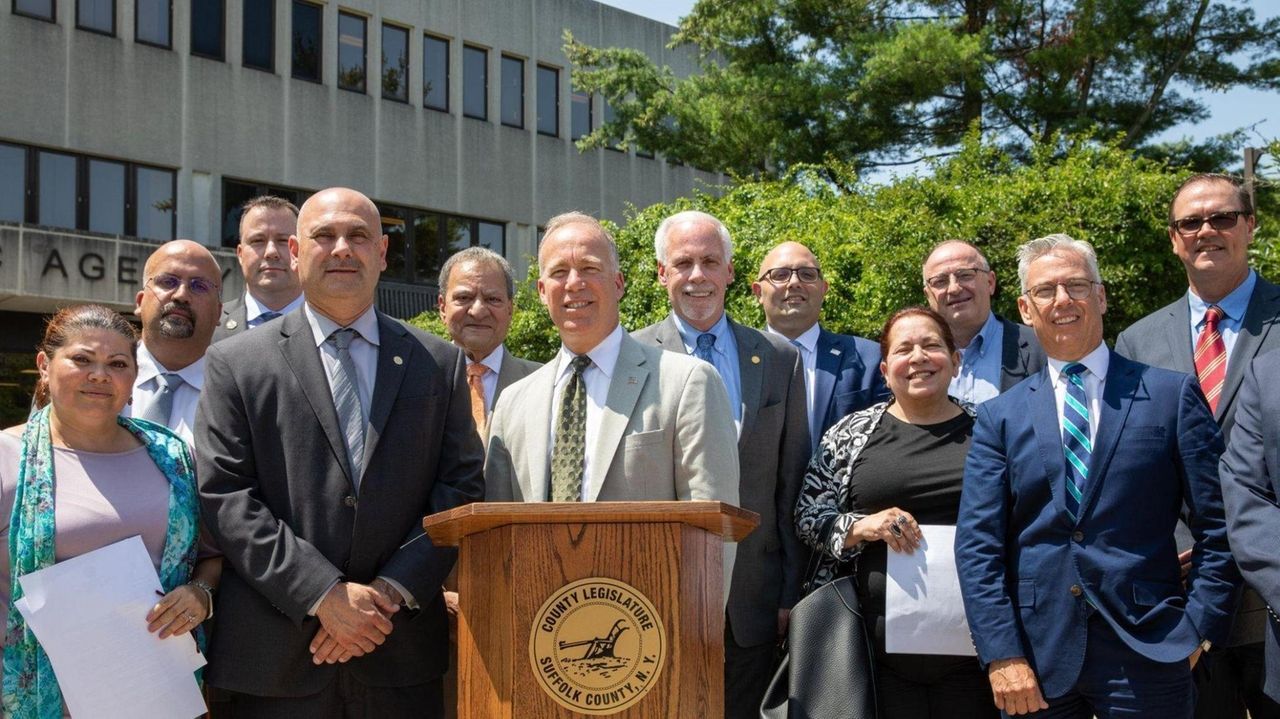 Republican Suffolk legislators called for an immediate suspension of the county’s controversial red light camera program until outside consultants, who did the $250,000 study, respond to questions about their conclusions that fatalities went down when accidents are up nearly 60 percent.

At a news conference outside the county’s traffic court in Hauppauge, seven GOP lawmakers and other Republican legislative candidates assailed consultants L.K. McLean Associates for failing to return as many as 10 calls from Legis. Rob Trotta (R-Fort Salonga) seeking further details on their report.

Legis. Tom Cilmi, GOP caucus head, said the study paints “a pretty grim picture” that crashes at 100 red light camera intersections increased by 2,100 from 2015 to 2017 compared to 2007-09 — for a total of 5,612. Yet the consultants concluded the “program is a success and should be continued” because fatalities were down 11 percent. Cilmi claimed they made questionable assumptions.

“McLean's analysis uses a hypothetical formula to guess that fatal accidents at these intersections would have increased by two or three were cameras not installed,” Cilmi said. “But that’s a giant if and seems to ignore reality.” What’s certain, he added, is “drivers in this county are playing Russian roulette every time they drive through an intersection monitored by a red light camera.”

McLean officials did not return calls.

Legis. Kevin McCaffrey (R-Lindenhurst) called the cameras mainly a “money grab,” and accidents at some camera intersections in his district have gone up 300 percent. Along one mile of East Great Neck Road, he added there are five red light camera intersections. "It's not about public safety, it’s about taking money out of the pockets of residents,”  McCaffrey said. The only bright spot, he added, is that the consultants urged removal of two of them, though he’s doubtful it will happen.

The GOP criticism of the study comes as the county legislature is scheduled to hold a public hearing  at 2 p.m. Tuesday in Hauppauge on whether to extend the red light camera contract.

Jason Elan, spokesman for County Executive Steve Bellone, said, “It’s unfortunate to see the Republican Minority Caucus devolve into conspiracy theories and misinformation at the expense of public safety …. This is an effective program that reduces serious injuries and saves lives.”

He said the study’s conclusion are similar to other municipal studies of red light camera programs, which found overall crashes increased, while fatal and injury crashes decreased.  Elan also said the report did not calculate the impact of the growing use of smartphones, which other studies have cited as a reason for increased crashes. In 2009, only 30 percent of people had smartphones and now 81 percent own them.

Presiding Officer DuWayne Gregory (D-Copiague) said he does not support a halt to the red light camera program, but called Republican's desire to question consultants a “reasonable request” and added they should appear before lawmakers to answer their questions.