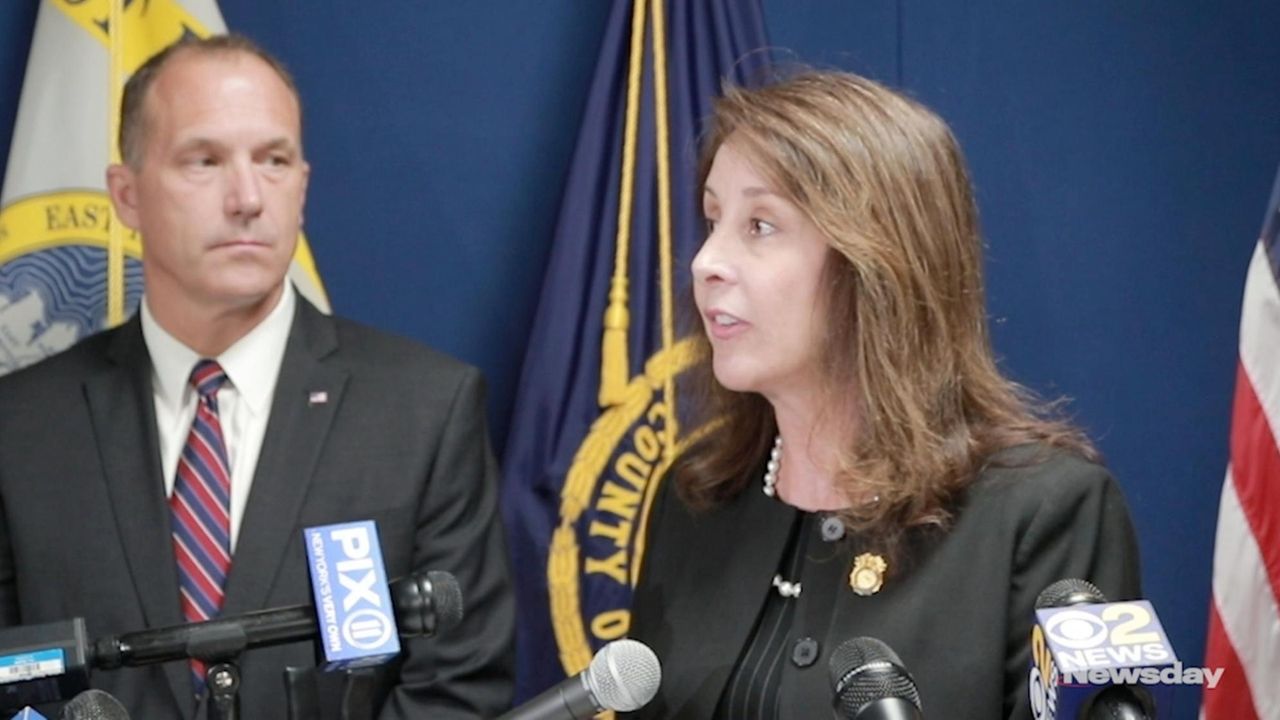 Suffolk County Police Commissioner Geraldine Hart on Monday issued a public warning to students and parents that minors who make threats of violence to schools could face felony charges.

“In this climate, we can no longer say ‘it’s kids being kids,’ “ said Hart, speaking at a news briefing at the police academy in Brentwood. “We will act on every threat. And we will charge students, even minors.”

Hart’s message comes amid a spate of school threats already this school year, including one in Center Moriches that included a photo of what appeared to be a semiautomatic long gun and a warning for students not to go to school the next day. It was actually an Airsoft gun, which is used competitively to shoot plastic projectiles. Police on Long Island and across the country have beefed up security and urged the public to report any threats of violence at schools after a series of deadly shootings, including last year at a Parkland, Florida, high school in which 17 people were killed.

Hart said minors accused of threatening violence at a school could be charged with making a terrorist threat, a felony. While many of the reported threats against schools are deemed not credible, the department spends enormous resources investigating each one, she said.

“That charge has the gravity to impact that student for the rest of their life,” Hart said. “I urge parents and guardians to have that conversation with their children about the severity of making a school threat to make sure they understand it is never OK to make a joke about a bomb or a gun.”

The first came last Thursday, when a student allegedly threatened verbally to bring a bomb to school in an undisclosed district within the confines of the Third Precinct, which is based in Bay Shore, Cameron said. On Friday, a student at another school that police would not identify told someone he was going to “bring a gun to school and shoot it up,” Cameron said.

From January to May this year, the police investigated 90 threats to schools and made 12 arrests. During the 2018 school year, police received reports of 312 school threats and arrested 16 people.

In the Center Moriches incident, a student sent a “very ominous-looking Snapchat,” said Cameron, referring to the social media platform that allows user to send photos, text and short video clips — which quickly disappear — to other users.

Superintendent Ronald Masera said he immediately moved into “crisis mode” and contacted Cameron on his cellphone to inform him of the alleged threat after he was advised by a school counselor who had been notified by a parent.

“I have to say that it is a comfort to know that if something happens at 9 o’clock at night, I can call the chief of police’s private cellphone and have some swift action take place,” said Masera, who added that roughly two hours later he was able to send out notes to staff and parents that the threat had been fully investigated.

Cameron said police quickly determined there was “no imminent threat,” but uniformed police officers were present in large numbers at the school the next day. Masera said he could not say whether the accused student faced any disciplinary action.

None of the three students accused in last week’s alleged threats has been criminally charged, said Cameron, who said the investigations are continuing.

“We make that determination, whether or not someone is actually acting upon the threats, whether they’re going from inspiration to operation,” Cameron said. “That often plays a great factor into any charges.”

Cameron said most parents are “aghast and incredulous” that their children are accused of such conduct.

“I think that many young adults just don’t realize that making a joke of this nature is completely unacceptable,” Cameron said. “That’s why I encourage parents to have that discussion.”