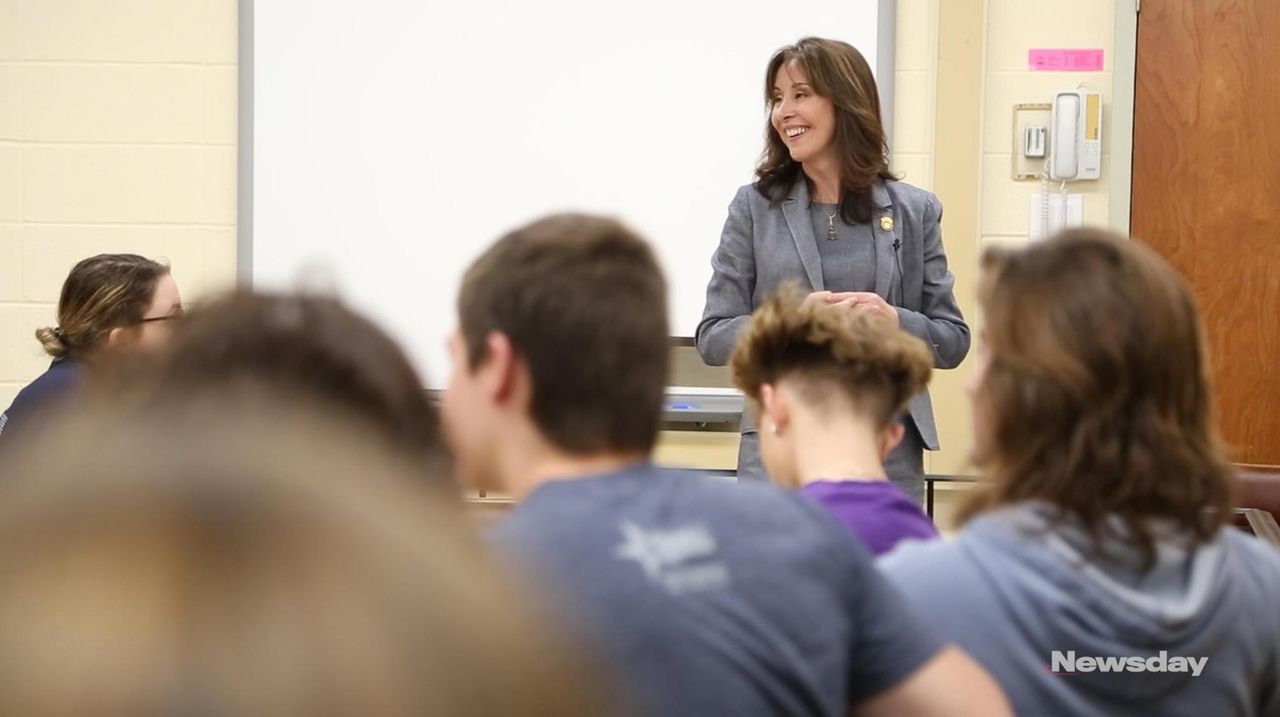 Suffolk Police Commissioner Geraldine Hart returned to Northport High School earlier this month to talk to students in the same mock courtroom where she once studied the law.

Suffolk’s top cop took the students on a virtual tour of her career, from her early days as an FBI agent, to senior supervisor in the bureau’s Long Island office, to her present crime-fighting days at the helm of one of the largest police departments in the country.

Hart, a graduate in the Northport High School Class of 1985, told the approximately two dozen students that they need to seize opportunities. “Many times people, especially women, don’t feel they are qualified for a position,” Hart said. “But sometimes people will see something in you that you don’t see in yourself.”

Hart, 51, wasn’t interested in talking about shattering glass ceilings or her place in history on April 9, 2018, when she became the first woman to serve as commissioner of the Suffolk Police Department. Hart  — who recently allowed Newsday to shadow her for a few hours as she went about her daily routine — said she is never comfortable tooting her own horn, and she wanted the focus to be on the 2,500 officers and 1,000 civilian employees and their accomplishments instead.

Total violent crimes dropped to 290 in the first quarter of this year, compared to 301 during the same period last year, according to statistics. Property crimes dipped from 3,532 in the first quarter of 2018 to 3,428 this year, through March 31. The department executed nearly 300 search warrants last year, Hart said, compared to 90 in 2015, and those searches removed illegal drugs and guns off Suffolk County streets.

“In just over one year, Commissioner Hart has built upon the progress we have made in reducing crime to the lowest levels in history,” Suffolk County Executive Steve Bellone, who hired her, said.

After initially shunning the spotlight, Hart said she has come to understand that she’d been given an opportunity to encourage and inspire other women, and the police commissioner has embraced her role as the face of a changing police department serving a county that is becoming increasingly diverse.

“I didn’t want it to be about being the first female commissioner,” Hart said. “But then I realized that it is important, it’s important to talk about it, especially with young kids, teenagers who may not imagine it or dream about it. You know what? I’m standing here because I did dream it, and you can do the same.”

Supporters say she has become a role model for women in criminal justice while leading the department to efficiently use intelligence, data and technology to put a dent in crime rates that were already scraping historic lows. The commissioner has also worked to build and strengthen relationships with Latinos and other Long Island minority communities that had felt discounted by previous police administrations, advocates say.

“I think she has done an excellent job,” said Noel DiGerolamo, president of the Suffolk County PBA, the union that represents police officers. “It’s been a year of stability, with very desirable leadership in place.”

Hart said her reluctance to serve as a symbol of change evaporated on her second day on the job while presiding over a promotion ceremony, when she presented a lieutenant’s shield to a female officer.

“It was great to see a woman coming across the stage,” Hart said. “Afterwards she sent me an email, which I always keep with me, and she said her daughter and her niece were at the ceremony and how much it meant to them to have a female commissioner up there. So maybe this is more about other people. Maybe it is about encouraging these young women.”

Hart said she differs from her predecessors in that she favors a collaborative management style. She was fortunate to have a strong leadership team in place when she was named commissioner, she said.

“I want to hear from the folks that have been doing this for 30, 35 years,” she said. “I value their opinion. I think that took people by surprise a little better, in a command staff meeting where I was turning to the chief of patrol and saying ‘what do you think?’ because I value their opinion. For me not to value that would be foolish. I think that is a new piece in the department. If you have a good idea, I want to hear it. I want to be approachable.”

Hart’s first year as commissioner, DiGerolamo and others said, represents a step forward for a police department and county that had been embroiled in scandal just a few years ago.

The department was accused of not fully investigating reports on attacks on Latinos after Ecuadorian immigrant Marcelo Lucero was assaulted and fatally stabbed by a group of young men in Patchogue in 2008; the attack led to an agreement between Suffolk police and the U.S. Justice Department in 2013 that called for the department to overhaul its policing of minority communities. Latino men also accused a former police sergeant, Scott Greene, of stealing cash from them during traffic stops from 2010 to 2013. Greene was eventually convicted on grand larceny and other charges and sentenced to a 1-to-3-year prison term in 2016.

Former chief James Burke, meanwhile, was sentenced to 46 months in prison in 2016 after pleading guilty to beating a man who stole a bag containing pornography and sex toys from his vehicle and then leading an elaborate scheme that included intimidating other officers to cover up the crime. Burke also pulled three detectives in 2012 from the Long Island Gang Task Force, just as MS-13 began a murder spree that resulted in the deaths of dozens of people across Long Island.

Hart’s predecessor Timothy Sini, now Suffolk County’s district attorney, took steps to mend the frayed relationship between police and minority communities, DiGerolamo said, and Hart has built on his work. Under Sini, the SCPD also returned to the Long Island Gang Task Force and renewed its working relationship with the FBI and other federal agencies. Hart, who spent more than 20 years with the FBI and became the head of the Long Island Gang Task Force in 2014, has strengthened those ties.

Hart said she was surprised at the level of mistrust that existed in minority communities when she became Suffolk’s top cop, and she’s worked hard to mend fences and build communication.

In recent months, the county spent $215,000 on a marketing campaign to encourage Latinos and other minorities to sign up for the June 15 police entrance exam, and Hart and other officials have visited churches, mosques, schools and other institutions to push members of minority communities to consider careers in law enforcement.

The department has also used technology to improve service to non-English-speaking residents, including tablet computers that provide access to the department’s Language Line, which provides translation services in more than 200 languages.

“She has been nothing but responsive to the community I represent,” said State Sen. Monica Martinez (D-Brentwood). “It’s been a breath of fresh air. I think she came into this position as an agent of change and she’s done it with passion and intelligence and heart.”

The commissioner said more work is ahead and highlighted a number of priorities.

Gang violence, especially from MS-13, continues to be a priority, Hart said. MS-13 was linked to 17 slayings in Suffolk County from January 2016 to April 2017, but there have been no known homicides connected to the gang since then. Many of the gang’s leaders are now behind bars, and Hart said the next step is to stop the gang from recruiting new members. The county is using federal and state grant money to develop programs to steer unaccompanied minors from Central America away from gang life.

“We know if we don’t present something to them, the gangs will.” Hart said. “So let’s make sure we are out there, connecting with them, offering after-school programs.”

The number of fatal opioid overdoses has dipped in Suffolk County, Hart said, but the epidemic continues. The department’s PIVOT program — Preventing Incarceraton Via Opportunities for Treatment — has helped addicts who might have gone to prison get help for their addictions, she said. Officers turn over the names of drug users they meet to the Long Island Council on Alcoholism and Drug Dependence, which then offers them the opportunity to get treatment.

Hart said having the ability to direct programs like PIVOT have helped her feel connected to the community she serves.

“I thoroughly enjoyed my FBI career but it is different,” Hart said. “It doesn’t have the kind of community connectivity that a police department allows you to have. Everything comes from headquarters in the bureau versus the PD, where you can really set the tone and set the directives for the department. You can make sure you feel connected to your community.”