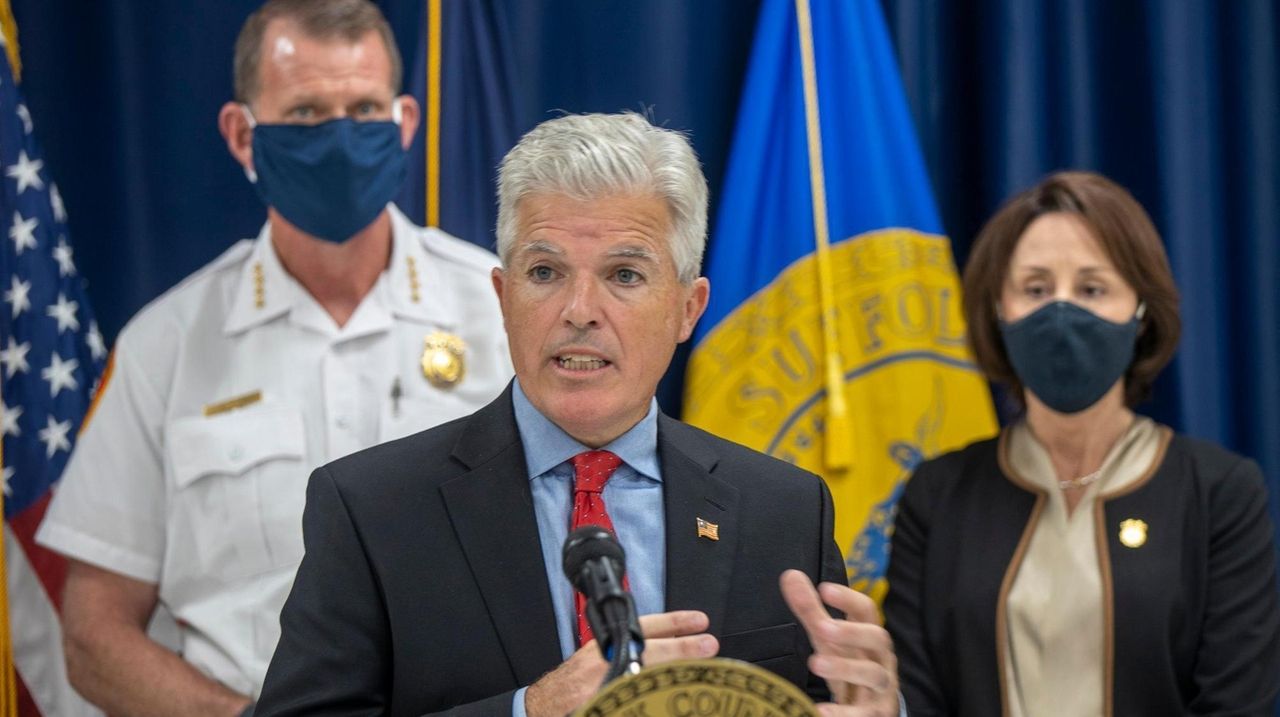 Evidence indicating the unequal enforcement of traffic laws by the Suffolk police is "unacceptable," County Executive Steve Bellone said Tuesday following a Newsday analysis of data that revealed disparate treatment of minorities and the release of a consultant’s report that expanded on those findings.

"These disparities are unacceptable to me. They're unacceptable to the police department," Bellone said at a news conference, where he was joined by Police Commissioner Geraldine Hart to release the county’s report. Hart called the differing experiences of Black, Hispanic and white drivers "very concerning for this department."

"Let me say that we are committed to being transparent. And that's not always comfortable," Hart said, adding, "Two things can be true at once. They can be a professional and effective department, and there can be room for improvements."

Newsday’s analysis of never-publicized racial and ethnic data drawn from more than 230,000 traffic stops revealed officers pulled over Black drivers almost four times more often than white drivers, and Hispanic drivers twice as often, when matched against the size of the driving age population in the area patrolled.

The John F. Finn Institute for Public Safety, hired by the county, analyzed a smaller sample of data, covering only one year starting in March 2018.

The consultant's report highlighted disparities that occurred after officers had stopped Black, Hispanic and white drivers. It compared their treatment in 10 areas, including how often officers took actions such as searching drivers, using force against them and placing them in patrol cars.

More than 2x as likely to be subjected to a search.

84% more likely to be restrained

More than 3x as likely to be subjected to physical force.

Its report represented the department’s first full public accounting of traffic-stop data under a 6-year-old agreement with the U.S. Department of Justice, in which the county committed to collecting and analyzing the data annually.

32% more likely to be ticketed;

25% less likely to receive a warning

Asked about remedies, Bellone pointed to implicit bias training required of officers, which has been in effect since 2018.

Hart said the department will analyze this data to the officer and command level.

"We will be taking a deeper dive into this data to identify where disparities are occurring, why they’re occurring and implement strategies for reform," she said.

"What people have known and spoken about for decades are born out by these numbers," said Fred Brewington, a Hempstead civil rights attorney and co-founder of Long Island Advocates for Police Accountability. He said Nassau and Suffolk counties need outside boards to oversee complaints about police misconduct. "It tells a very sad story, that there are levels of serious disparities to how policing is done based on race."

Elaine Gross, president of ERASE Racism, a Syosset-based civil rights group, said Newsday’s analysis "shows the biased policing against Blacks and Hispanics that many of us suspected. You run out of adjectives. It’s appalling. It’s disturbing."

She said the analysis also highlighted the importance of collecting the data.

She said Suffolk’s report "should have come earlier from them. You would have hoped that the data would’ve been analyzed at the beginning, and they would’ve already implemented new policies and practices to stop these behaviors and what’s going on in the officers."

"I kind of expect to see these sorts of trends, and the reasons we see a lot of these is because of intrinsic bias that we all have," Spencer said.

He reiterated that he thought Bellone and Hart have "done a great job, but we’re still heading in the wrong direction because it appears the ratio actually got worse [in recent years]. To me that is the most shocking thing."

He said the county deserved credit for complying with the DOJ and presenting the data "and not hiding behind the data and I applaud them."

"That’s the only way there’s change, to admit there’s a shortcoming."

"There are myriad reasons why statistics might show certain anomalies the way they do … Officers are assigned to specific areas by the department and those officers are asked to perform their duties and responsibilities in the most professional manner possible to ensure public safety, which I know they do on a daily basis," he said.

The Finn Institute report, which cost the county $24,489, found disparities in 10 areas.

The Finn Institute analysis included a test done by researchers known as "veil of darkness" that looks at whether stops occurred in daylight or darkness. It used that test to determine that stop rates between Black, Hispanic and white drivers were not caused by race. Newsday’s analysis did not include a veil of darkness test.

It also said "the available data precluded analyses that take account of several factors that might account for these differences. Our analysis of the use of force, for example, could not account for citizens’ resistance. We advise readers to exercise caution in drawing inferences about bias in any of these forms of enforcement action."

Researchers who reviewed Newsday’s analysis said that all the disparities, from searches to stops to what was found, indicate that race played a factor.

With Matt Clark and Paul LaRocco

The 'veil of darkness' test

The “veil of darkness” test is designed to detect, or rule out, racial bias as a factor in traffic stops disparities.

Or the officers may specifically target minority drivers.

To do that, police must be able to see who’s behind the wheel, which requires light.

The veil of darkness test compares how frequently police pulled over minority drivers before dark and after dark, when it’s harder to identify a driver’s race or ethnicity. If the rates are similar in day and night, the theory holds that disparities alone do not prove biased policing.

Serving as a consultant to the Suffolk County Police Department, the Finn Institute of Public Safety examined a year of stops that occurred during a period called “inter-twilight," which ranged in the county from as early as 4:54 p.m. in December to as late as 9:08 p.m. in June.

The researchers also factored in patterns of stops that occurred within 30 days of the beginning and end of daylight saving time.

Although the Finn Institute found that Suffolk police had pulled Black drivers over more frequently than whites compared with their proportion of the county’s population, it also reported that the veil of darkness test had discovered no statistically significant racial disparity between traffic stops that occurred during daylight and nighttime.

“The results of the veil-of-darkness analyses all lead to the same conclusion that in making the initial stop, Suffolk County police display no systematic bias against either Blacks or Hispanics,” the report states.