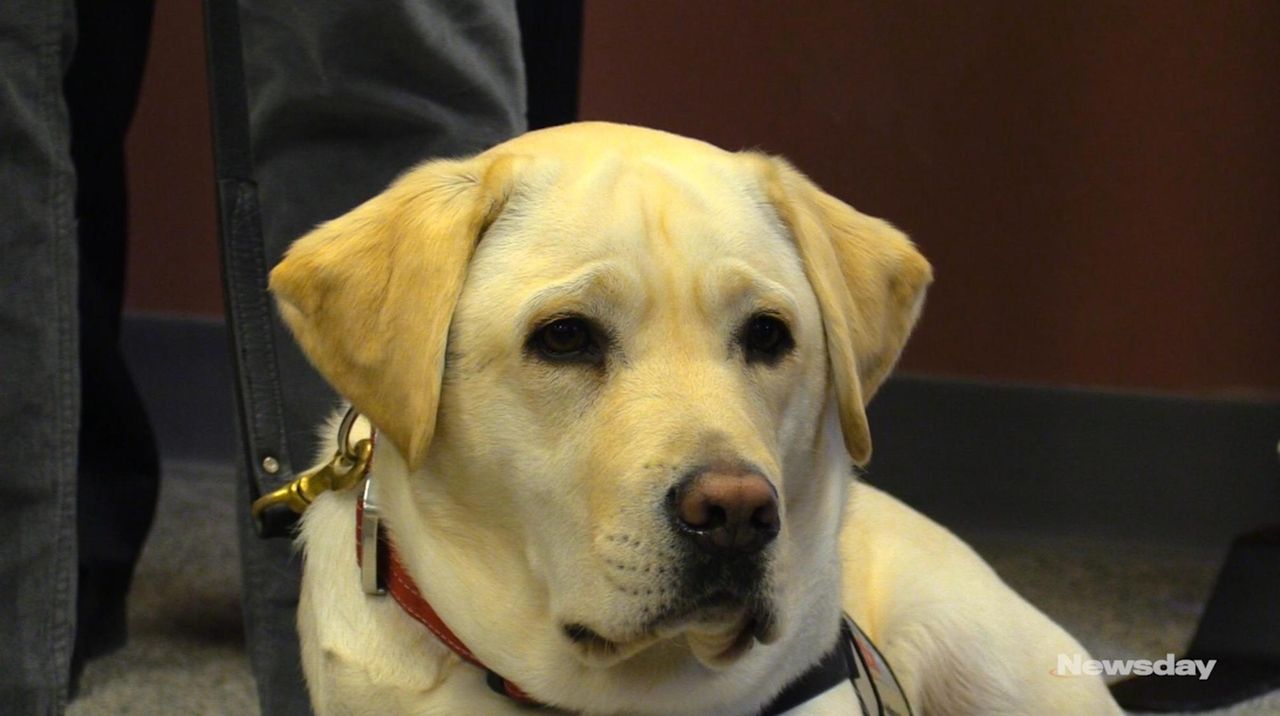 With a wag of his tail, Sully — the service dog who worked with former President George H.W. Bush — returned Wednesday to his Smithtown birthplace and received a hero's welcome.

The cream-colored Labrador retriever with a calm disposition served Bush in the last six months of his life. On Wednesday, public officials greeted Sully with speeches while a scrum of news-media cameras captured the celebration of Long Island's newest four-legged celebrity.

A feeling of Long Island pride filled the room at America’s VetDogs in Smithtown, where the 2-year-old Sully was born and trained.

Coming to Bush after the death of his wife, Barbara, Sully helped pick up things for the former president, opened doors and pushed an electronic button when the 41st president needed assistance.

Sully — named for Chesley Sullenberger, the US Airways pilot who safely landed an Airbus A320 on an icy Hudson River in January 2009 with 155 passengers and crew aboard — also provided Bush companionship. He often rested his head on Bush’s lap, said Valerie Cramer, the dog's trainer and the person Sully is living with before he starts his new assignment.

“He wanted to show him that he loved him too,” she said.

In accord with Bush’s wish, Sully will leave in February to comfort veterans just outside Washington, D.C., at Walter Reed National Military Medical Center in Bethesda, Maryland.

John Miller, president of America’s VetDogs, recalled the moment when Sully sprang onto the national stage. He was photographed last month lying on a carpet near Bush’s flag-draped coffin. The photo was posted online with the caption “Mission complete,” and soon went viral.

“That gave us all chills,” Miller said of the photo, posted on Twitter by Jim McGrath, the former president’s post-White House spokesman. “We all felt such a tremendous sense of pride.”

Sully became a beloved part of Bush's life, so much so that the former president with a well-chronicled taste for colorful, often patriotic-themed socks, included a powder-blue pair adorned with dog paws and an image of Sully's face among his flamboyant collection.

Toward the end of his life, Bush, a lover of dogs since childhood, would notice if Sully had shuffled away for a moment and ask for him, Cramer said.

Bush died Nov. 30 at the age of 94. His son, former President George W. Bush, posted Sully's photo on his Instagram account with a moving tribute to his father as well as Sully and the veterans-in-need the service dog will soon assist.

"As much as our family is going to miss this dog," the 43rd president wrote, "we’re comforted to know he’ll bring the same joy to his new home, Walter Reed, that he brought to 41."

At Wednesday's event, Cramer walked Sully into the room, where the presidential pooch — appearing somewhat wary at the bank of the news cameras trained on him — extended a paw for a shake, wagged his tail and licked his chops. He still wore the presidential seal on his service dog vest.

Cramer walked Sully through a few of the skills the dog learned before embarking on his service assignment. Sully showed how he could pick up his own leash and nudge an electronic button with his snout, his method of calling for assistance.

Suffolk County Executive Steve Bellone noted that Bush, a young naval aviator during World War II who narrowly escaped death after his plane was shot down over the Pacific Ocean in 1944, was among numerous veterans who've received a service dog from the Smithtown group. Since it started in 2003, America's VetDogs has placed more than 350 dogs with vets. Bellone presented Sully with a certificate and a toy dog bone.

Cramer called Sully “the perfect dog,” describing him as “loyal, calm, kind with children . . . a willing worker, smart and adaptable to all environments.”

In response to a reporter, Cramer answered critics who have complained about what they viewed as overly-sentimental tributes to the relationship between Sully. and the former president.

“There was a genuine bond,” she said of the friendship between Bush and Sully.

She believes Sully was able to comprehend the gravity of the death of a former commander in chief.

“He understood the sadness of the occasion,” Cramer said. “He picked up on it.”

Former President George H.W. Bush was 94 when he died Nov. 30. An earlier version of this story misstated his age.