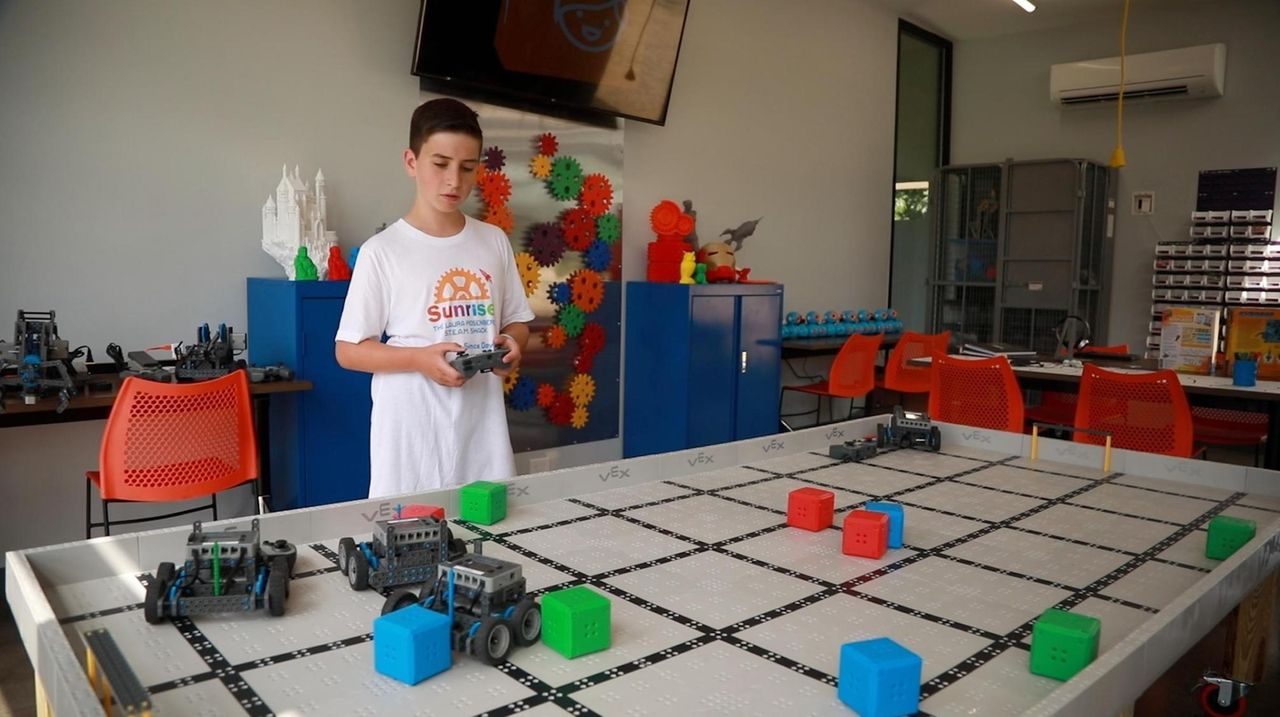 Sunrise Day Camp opened a new technology center Monday. The camp is for kids with cancer and their siblings.  Credit: Newsday / Shelby Knowles

Lane Romano concedes he's not the most athletic kid and doesn't have much interest in shooting hoops or playing catch with his friends.

But he always wanted to program robots and write his own code. And now he's going to get his chance — at Sunrise Day Camp in Wheatley Heights, the camp where he goes with his brother and sister.

Sunrise describes itself as the first camp in the nation tailored for children with cancer and their siblings. Lane, of Blue Point, was diagnosed six years ago with a rare, malignant cancerous tumor in his soft tissue. Now 12 and four years in remission, Lane is spending some of summer vacation at camp with brother Blake, 9, and their 8-year-old sister Kayden

Two years ago, Lane told a camp counselor, self-professed computer geek Max Miller, that he wished Sunrise had a world-class technology center where he could learn engineering and robotics, and use 3D printers.

What followed were months of crowdfunding and camp officials asking donors to open their wallets. The countless emails, texts, calls and letters worked: $450,000 in private contributions coupled with $150,000 in state grants.

For Miller, a college sophomore back home in Roslyn for the summer, giving the campers an interest in computer science when they are so young can be life-changing.

"The kids light up," said Miller, 19, who goes to Chapman University in California. "It's so amazing seeing them design something on a computer and printed in real life so they can touch it and hold it. It's unlike anything else."

The new technology center is an oasis for kids more inclined to graphic design and photo editing than soccer and swimming relays.

The 1,050-square-foot, air-conditioned building features a host of advanced hardware and software programs, including modular music studios, robotics, code-enabled drones and four 3D printers. In the past week alone, the campers have used the printers to create near-perfect replicas of Thor's hammer, the Iron Man helmet and a German castle.

"This is a dream come true," said David Miller, Max's father and a member of the camp's board of directors. "The kids love it. It is literally, and figuratively, the coolest place at Sunrise Day camp."

Lane, who missed all of second grade as he endured eight rounds of chemotherapy and 30 rounds of radiation, lit up as he talked about his new technological toys.

"You could get job opportunities through this," said Lane, who will be in seventh grade this fall. "We do this a lot in school. This is so important for your future."

Michael Rosenberg of Woodbury oversees the Laura Rosenberg Foundation, which raises money for pediatric cancer programs in memory of his sister, who died of leukemia at 15. He hopes the technology center opens new doors for students who have missed long periods of school and have fallen behind their peers.

"This could spark an interest in [a] child and possibly open up a whole new world," Rosenberg said.

Sunrise, which is free, opened in 2006 with 96 children and has since grown to more than 2,200 kids at eight camps nationwide and in Israel.

The Suffolk campus remains the camp's largest, with 730 children from ages 3 to 18 enrolled this summer. The camp also operates Sunrise on Wheels, which provides toys, games and summer activities at 31 pediatric hospital oncology units across the country.

In many ways, Sunrise is like any other camp across the region. Kids swim, play tennis and do arts and crafts projects.

Campers can't make contact when they play basketball. The volleyballs are soft. A misting tent is for kids who can't get in the pool. Counselors are trained in the medical and psychological aspects of cancer patients. And a team of oncology nurses is on-site.

"Everything you would see in a normative camp you will see here, but with special precautions behind scene," Preminger said.

For Lane's mom, Kelly Romano, Sunrise is a place where Lane can go back to being a kid again after years of hospital visits and treatment. And he can do it with Blake and Kayden.

"I don't know what I would have done without this camp," Romano said, wiping tears from her eyes. "Sunrise saved me."