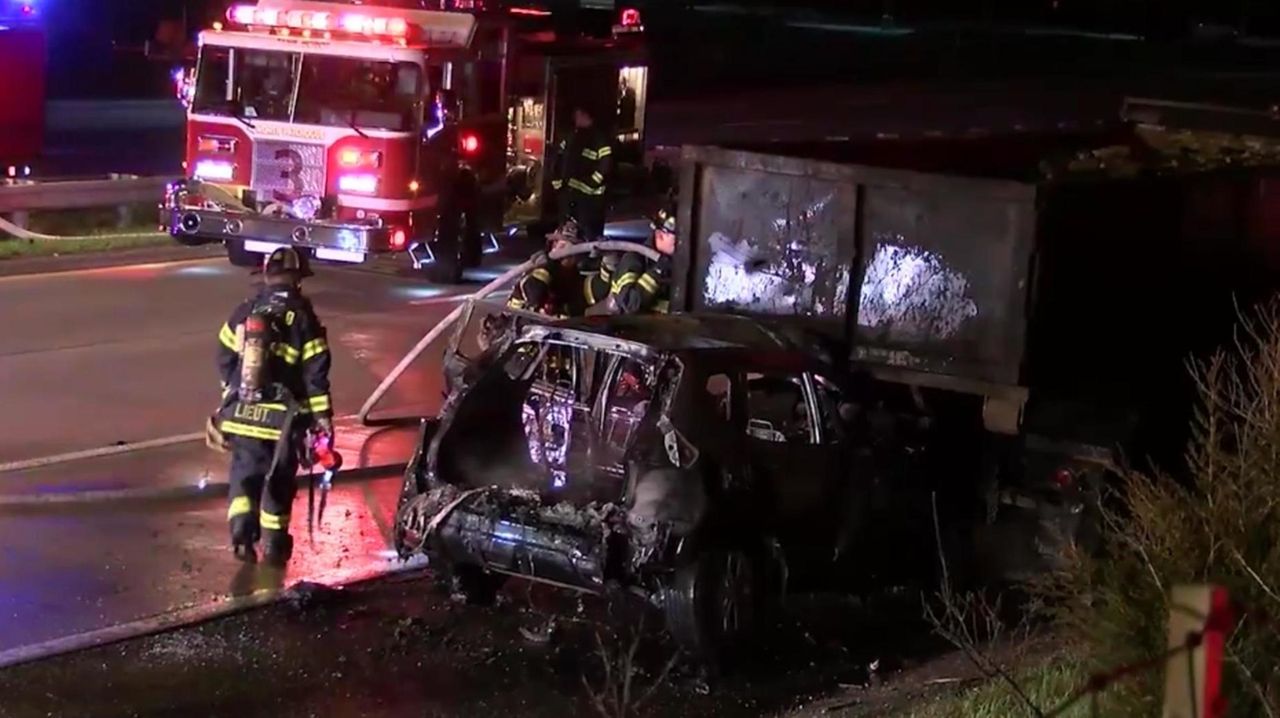 A 19-year-old woman was pulled from a burning SUV with under a minute to spare after she slammed into a tractor trailer shortly before dawn while driving drunk east on Sunrise Highway, said a rescuer and the police.

“This girl, you could hear her screaming across the six lanes, from the flames burning her,” said Robert Hosey, a Lindenhurst native who was driving west at the time.

“I just, I saw one cop trying to bash the window to get to her, so I stopped, ran across to give him a hand,” he said. “Flames were coming right over the dashboard, burning her legs.”

An officer who happened to be quite close responded to the East Patchogue collision, reported at 4:20 a.m., in under a minute, said police Capt. Patrick Mahan, the Suffolk highway patrol’s executive officer.

Another officer quickly joined him, along with another passerby, police said.

“The front end was completely crushed,” Hosey said. “The backseat door was wedged shut. The electrical system pretty much melted from the fire. We couldn’t get the lock to work.”

After the woman, Mercedes Ramos, 19, of Medford, collided with the truck, the two vehicles somehow got stuck together.

The truck driver, not realizing what had happened, dragged her in the 2016 Nissan Rogue for about a quarter of a mile before pulling over, police said.

Officers Richard Gandolfo and John McCrory came to her aid with Hosey and one other person.

They expended three or four fire extinguishers in an attempt to control the fire during the rescue, Mahan said.

Hosey, who knows cars, offered more details: “The window was busted out, so I was able to reach in and pull the door handle off, then pull the wire” that locks and unlocks the car. “We were able to get the door open.”

“I popped inside the door, I was in the backseat, she was wedged in between the two [front] seats, she was trying to get to the back, but her left ankle was completely snapped, so she couldn’t push off, she was close to a delirious state.”

Mahan confirmed Ramos was “hung up” in the car.

Hosey said, “I pulled her between the two front seats, trying to push her out, and Officer Gandolfo grabs her by the arms, then got her off to the grass.”

Ramos then insisted someone else was trapped inside, Hosey said.

Pulling his leather jacket over his head — “There’s not much left of it” — he said he climbed back inside, braving flames and smoke, to search the floor of the front seat.

There were no passengers, however. And the skinniest of safety margins.

“After we got her out, maybe 45 seconds later, the car was engulfed in flames, and the tires popped,” Hosey said.

Both officers and Hosey were treated for minor burns and smoke inhalation and released from Long Island Medical Center in East Patchogue, police said. The driver of the 2000 Mack truck and the other passerby, a 41-year-old Ridge man, were not injured, police said.

Ramos was taken to Long Island Medical Center for injuries that were not considered life-threatening, police said.

She will be arraigned later on a field appearance ticket charging her with driving while intoxicated, police said.

Hosey, a father of two teens who just learned two weeks ago that a third child is on the way, made light of his heroism, though all the smoke triggered his first asthma attack in years — and he was still coughing up “black stuff” nearly a dozen hours later.

Several factors heightened the rescuers’ peril. “It’s a very elevated risk, you know, you’re on the side of the road, it’s pitch black, there is the possibility of other motorists doing something similar,” Mahan said.

“Then there is a fire, there’s explosive gasoline, potentially, there are a whole lot of things that could have gone grossly wrong with that situation.”

As for Ramos’ SUV, “The car was burnt beyond anyone surviving in it, as was the rear of the truck,” Mahan said.

“It’s obvious, from what I saw anyway, she would have perished in there.”

Mahan praised the officers for their save.

“I’m sure if you ask the cops, they’ll say, ‘It’s all in a day’s work,’ but they went above and beyond, which is great.”