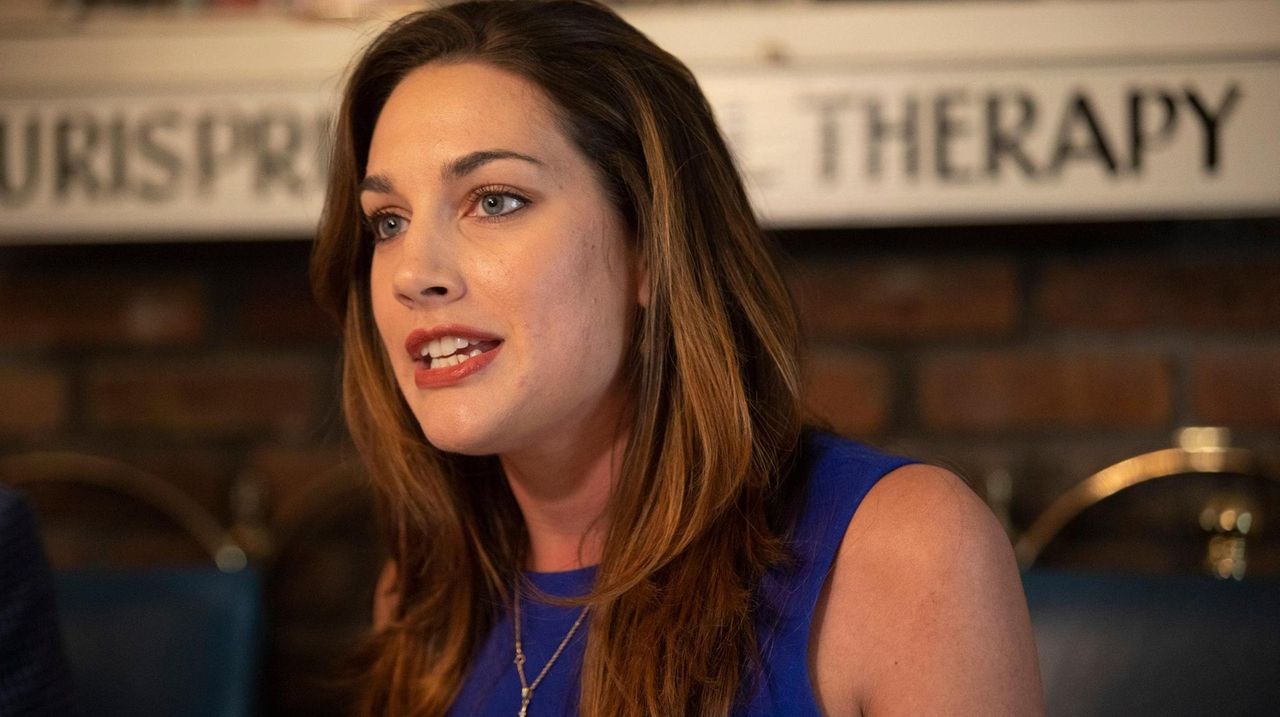 Lauren Miranda of Mastic Beach filed a notice of claim on Monday saying she will sue the South Country School District for firing her after a student obtained a topless selfie of her.  Credit: Jessica Rotkiewicz

A middle school math teacher has filed a notice of claim saying she will bring a $3 million lawsuit against the South Country School District, accusing the district of firing her after a student obtained a selfie of her topless.

Lauren Miranda, 25, of Mastic Beach, says she was treated unjustly by the district because, she contends, a male teacher seen topless in a photograph would never be punished.

“I am a teacher who is being penalized for being a woman,” Miranda said at a news conference Monday in the Miller Place office of her attorney, John Ray. “My future has been condemned because I am a female, with female breasts, seen in a mild selfie.”

Ray said, “We are in the Millenial and Z Generation, and things have long changed since the days of Playboy magazine ... Today, there is absolutely nothing wrong with the display of a woman’s chest.”

Miranda, a teacher at Bellport Middle School, said she was confronted by school officials in January after at least one student obtained the photo. Miranda said she never sent the photo to any student and has no idea how the student got the photo. She said she texted it to another teacher in the district whom she was dating at the time.

She said she never posted the photograph on social media.

Miranda was officially fired Wednesday by the school board in a closed meeting, she said. She was up for tenure this year. She had met with the board twice before that action, she said.

South Country Superintendent Joseph Giani said in a statement, “The district does not comment on active litigation.”

Miranda said the suit will demand her reinstatement and $3 million for damages for lost employment, the impact on her reputation, resulting anxiety and depression.

The notice of claim names the district, the superintendent, and Board of Education members.

The suit will charge that the district conducted an inadequate investigation into the issue. Miranda said she felt humiliated when she met with school officials.

She said she had no regrets  about taking the photo in 2016 or texting it to her partner at the time. “I’m proud of my body ... Everything I have worked so hard for since I was 18 years old has been stolen from me because of one innocuous selfie ... My upper torso is no more offensive than a man’s.”

Ray contended the photograph “is not a prurient picture,” and that by law women can appear in public topless in New York State.

Miranda, a SUNY Oneonta graduate with a master’s degree from Stony Brook University, said she had received excellent evaluations from administrators during the nearly four years she taught in the district. She brought copies of them to the news conference.

In her evaluation for this past school year, Miranda received the top rating in almost every category, according to the document. Miranda “demonstrated in this lesson to be an outstanding math instructor, knowledgeable of her content area, but most of all genuinely dedicated to the academic progress of all of her students,” read one evaluation.

“I loved my job,” she said. “I really thought this was where I was going to spend the next 30 years of my life.”

Now, Miranda said, “my career has been ruined, my reputation has been tarnished, I have been stigmatized.”