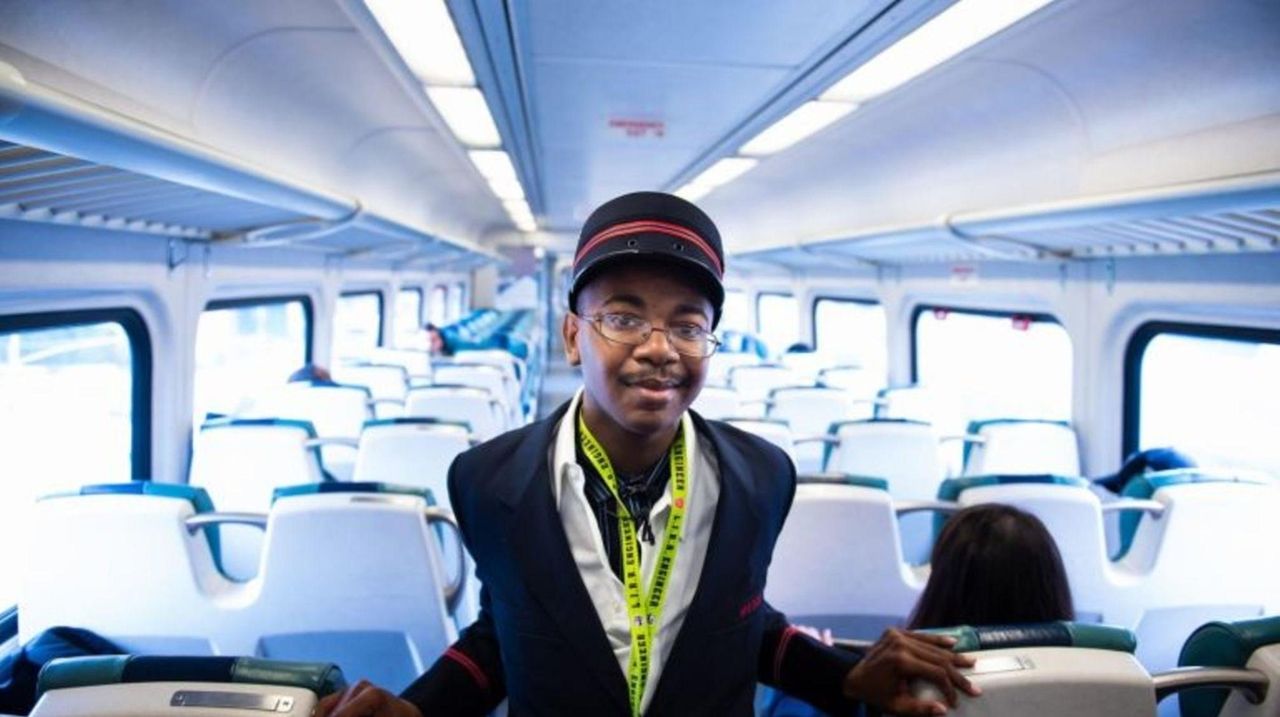 On Monday, Islip High School junior Malik Ellis worked his dream job as a Long Island Rail Road conductor for the day. Ellis, 18, has prune belly syndrome, which caused his kidneys to fail. Last month, Ellis' assistant principal Lisa Ward helped him make a video in which he spoke about his need for a new kidney and his dream of working for the LIRR. LIRR officials then invited him to spend a day on the job. Credit: Corey Sipkin

Malik Ellis can recall the precise moment he fell in love with the Long Island Rail Road.

He was just 2 years old, and he said he remembers seeing the first M7 railcars rush past the Islip station. It was 2002 and the new cars had just begun servicing the LIRR that year.

“I’ve been obsessed ever since,” said Ellis, a junior at Islip High School.

On Monday, Ellis spent a day working his dream job. He learned how to operate a train, helped customers purchase LIRR tickets and got to meet LIRR president Phillip Eng.

Ellis, 18, has Prune-belly syndrome, a rare disorder that’s caused his kidneys to fail. Seven years ago he received a kidney transplant from his sister, but recently his doctors told him he would need another, said Ellis’ mother, Nicole Paul-Smith.

Last month, an assistant principal at Ellis’ high school, Lisa Ward, helped him make a video in which he asked for a new kidney and spoke about his dream to work someday for the LIRR. The video circulated online and eventually found its way to officials at the LIRR, who invited him to spend a day on the job.

“When you talk to him, you can tell he has such a passion for the railroad. He knows every branch and has memorized the timetables,” said Michael Gilson, general manager of fleet operations, who helped coordinate the event. “I thought it’d be nice if the LIRR could do something for him.”

Ellis, his parents, a couple of his teachers and a friend caught the 7:08 a.m. Monday morning from Islip to the LIRR headquarters in Jamaica, Queens. There they met with LIRR employees, worked in a ticket booth and walked through the service planning department where train schedules are set.

They then took a train to the LIRR’s Hillside facility, where Ellis met with the maintenance department and toured the car shop.

But Ellis said his favorite part of the day was when he briefly got behind the controls of an equipment train. As he pulled the lever to sound the train’s horn, his friend, Joseph Schmid, 15, excitedly recorded him on his phone.

The two are LIRR fanatics and first met online after admiring each other’s Instagram accounts — both filled with photos and videos of trains.

“That was incredible,” Ellis said, giddy in a conductor’s cap and matching jacket.

Ellis returned to Jamaica station and was greeted by Eng on the platform. He leaned in close to the new LIRR president and shared his ideas for improving the service.

“One day on the job and you want to stay,” Eng said, smiling. “I hope it’s been an amazing day.”

Paul-Smith, 44, said she was overwhelmed by what was being done for her son. She remembers riding the train with Ellis as a toddler and his pleading with her to remain on the train just a little bit longer.

Ellis has undergone multiple surgeries and was on dialysis for a time because of his failing kidneys, his mother said. Two years after he received the donation from his sister, his body began to reject the organ, Paul-Smith said.

Paul-Smith hopes news of the event will persuade more people to donate and spread awareness of Prune-belly syndrome, a birth defect affecting one in every 40,000 children.

Railroad officials gave Ellis a few gifts, including a personalized LIRR ticket commemorating his day as an engineer and an axle and wheels in miniature.

“It really gives me a boost,” Ellis said at the end of his tour, “that I’m fine, nothing bad will happen as long as I follow my dreams, and as long as there’s a donor out there who’s willing to give me a kidney.”

For more information on how to be screened to become a possible donor, contact NewYork-Presbyterian/Weill Cornell Medical Center Kidney Transplant Program at 212-746-3099.