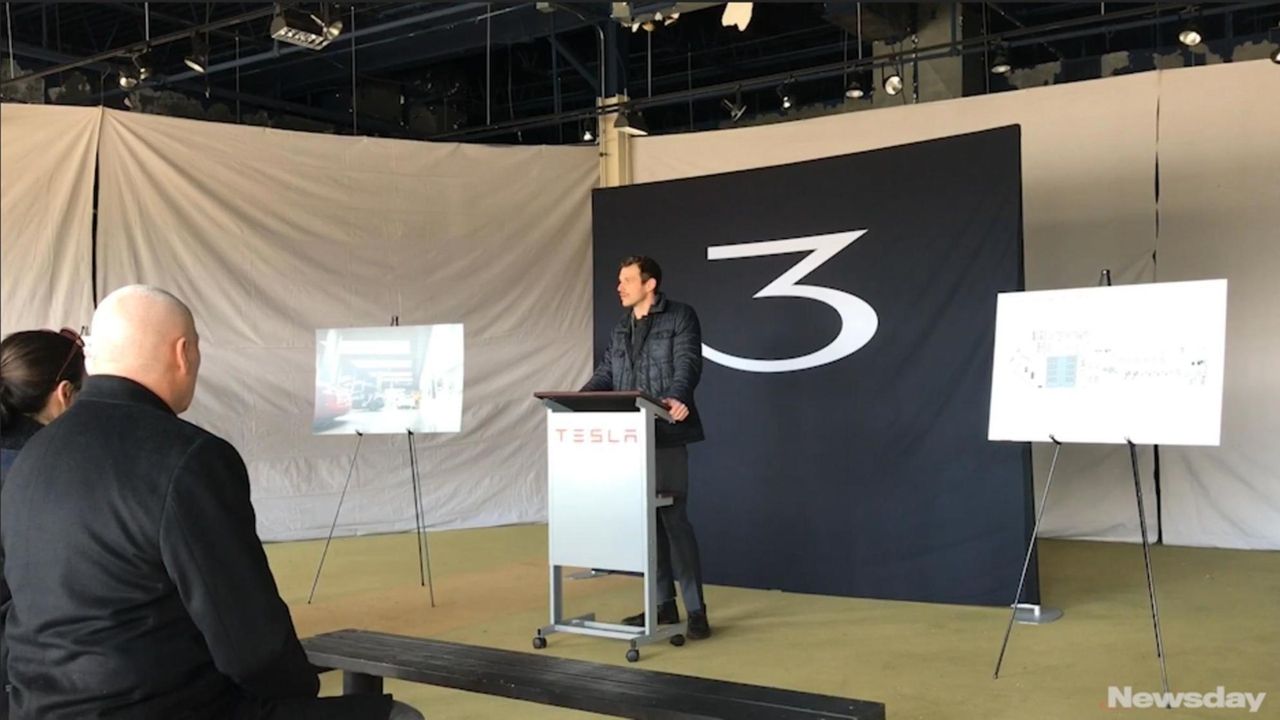 Electric carmaker Tesla will open a service center in Smithtown by the end of the year, a company executive said Friday.

Senior company manager for policy and business development Will Nicholas said the service center would be a beachhead to a Long Island market much bigger than electric cars, including solar roof tiles and batteries to increase power grid resilience.

“Long Island is extremely representative of the future of what we’re all looking for in terms of sustainable technology,” said Nicholas, speaking at a news conference inside a former electronics store at 1000 Nesconset Hwy. that the company will occupy after renovations.

Renovations will start soon, and the facility will generate 25 jobs, company representatives said. Nicholas was joined by local elected officials happy to see new life at the high-visibility property. Representatives were also present from Farmingdale State College, which has sent one student to a job and one to an internship at the company after announcing an agreement last year on training and career opportunities.

Also on Friday David Macholz, academic chairman of the automotive technology program at Suffolk County Community College, said Tesla executives visited last month to talk about developing a program to train students as company technicians. A Tesla representative did not confirm the talks.

Tesla is not permitted to sell cars at the Smithtown location under an agreement that limits it to five already existing direct sales facilities across New York State. But the company is supporting legislation in committee in Albany to lift that cap to 20.

Assembly Majority Leader Joseph Morelle co-sponsored a bill that would lift the cap. Senate Majority Leader John J. Flanagan (R-East Northport) attended Friday’s event and spoke glowingly about the good Tesla could do for the local economy but did not give his stance on the legislation.

Wade Newton, a spokesman for Auto Alliance, a trade group of automobile manufacturers operating in the United States, said in an email that Tesla “wanted special treatment” to pursue its direct sales model instead of using independent dealers as is the case with most manufacturers.

Tesla spent $198,719 in 2017 to lobby in Albany on matters including direct sales legislation, according to state records; the Auto Alliance spent $100,000. Additionally, trade associations representing new car franchise dealerships in New York spent at least $327,641 lobbying on the legislation or on Tesla.

Small plane crashes in East Quogue but pilot unharmed
A largely issue-free first day of early voting across LI
516 area code callers' fingers to be getting workouts
Retired firefighter in need of someone to save him
Didn’t find what you were looking for?