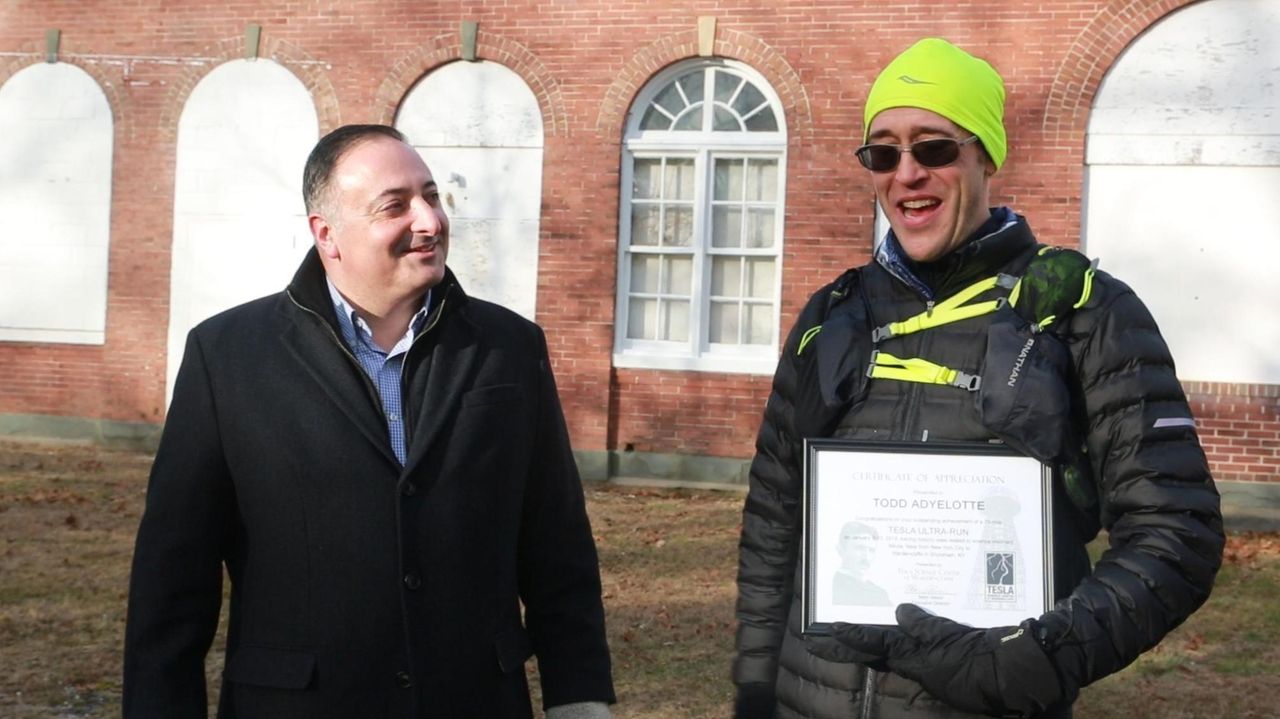 Ultramarathoner Todd Aydelotte finished a 74-mile run Thursday, from his home in Manhattan out to the Tesla Science Center at Wardenclyffe in Shoreham. Driven by a love of history and a deep appreciation of innovative electrical engineer Nikola Tesla, the 50-year-old started Wednesday afternoon and ran through the night, tracing Tesla’s achievements there, and finished in the parking lot of Tesla’s last existing laboratory Thursday afternoon. Credit: Newsday / Shelby Knowles

A love of history and a deep appreciation of innovative electrical engineer Nikola Tesla inspired New York ultramarathoner Todd Aydelotte to make the 74-mile trip out to the Tesla Science Center at Wardenclyffe in Shoreham Thursday on foot.

Aydelotte, 50, of Manhattan, started at 1:30 p.m. Wednesday from his house on the Upper East Side, ran through the night, tracing Tesla’s achievements there, and finished in the parking lot of Tesla’s last existing laboratory a little past 3 p.m. Thursday.

“Some of the great ultra runners run 100 miles at seven-minute paces,” said Aydelotte, who works in public relations.  “I’m not a fast runner, but I can run very long. …You hear about (ultra runners) going on meditative runs and losing themselves in the beauty all around them. They’re usually running in canyons and over mountains. Being in Manhattan, I don’t have that luxury, but I’m super into history.”

The Tesla run was Aydelotte’s longest to date, he said.

“About a month ago, I really started studying Tesla,” Aydelotte said. “It’s extraordinary what this man achieved.…He was relentless in his work ethic, his values, and was a great man. There’s just so many reports of him working day upon day, just not giving up on a vision.”

When Aydelotte contacted the Tesla Science Center last month asking if they would allow him to end the run on their campus, they were eager to oblige.

“It’s amazing that someone wanted to do something that strenuous and that extreme,” said Jane Alcorn, president of the board of directors and a founder of the center. “…It’s always very gratifying for us to see people who are inspired by Tesla and want to share their passion with us….It just magnifies the efforts of all of us to bring attention to Tesla’s legacy.”

Aydelotte said he ran about 17 ½ hours before reaching Shoreham. Even though he did not sleep, Aydelotte did stop to rest in diners and 24-hour Laundromats along the way, including a stop at the Candlelight Diner in Commack at 6 a.m. Thursday.

“I stayed there for a while,” Aydelotte said. “The winds in the middle of the night were just cutting through me.”

Throughout the run, Aydelotte passed by and appreciated many sites that played a key role in Tesla’s life and career. These include: the site of Columbia College on 45th Street where Tesla gave three historic lectures and demonstrations; The New Yorker Hotel where Tesla lived for the last decade of his life; the Waldorf Astoria where Tesla lived for many years at the height of the Gilded Age (1870-1900), and the former site of Tesla’s famous lab on South Fifth Avenue where Mark Twain visited to see experiments, according to a news release.

“I don’t run flat-out when I do these runs,” Aydelotte said. “I’ll go to a site, take pictures, try and understand the neighborhood and how it’s changed, because so many things are gone…I try and stop at those sites and really take in some of the history before going on.”

Aydelotte said that he left the New York historical sites at 4 p.m. Wednesday, setting out for the long journey to Shoreham. After crossing the Brooklyn Bridge, he traveled down Jamaica Avenue, then Old Country Road, then went back and forth between Route 25A and Route 347 before reaching the laboratory.

Upon reaching the laboratory, he was greeted by cheering members of the Tesla Science Center and his wife, Tess, whom he stopped to kiss before touring the site.