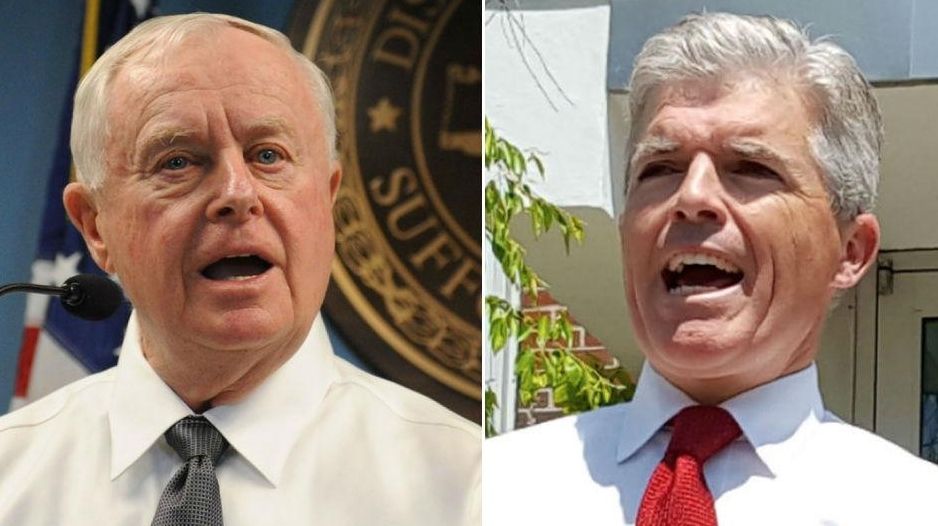 Suffolk County Executive Steve Bellone called Thursday for District Attorney Thomas Spota to resign for allegedly using his office to protect friends and punish enemies, but the longtime prosecutor refused and said he had done nothing wrong.

“Tom Spota, you must resign from this office,” Bellone said at a noon news conference outside Spota’s office in Hauppauge, following disclosures Thursday in Newsday that the district attorney failed to prosecute possible criminal activity uncovered in wiretaps.

“This culture of corruption which perverts this government, which destroys lives, which undermines justice cannot be allowed to continue,” Bellone said. “What we’re talking about here is the district attorney’s office that employs selective prosecution, targeting political enemies, protecting political friends.”

At a news conference in his office an hour later, Spota said Bellone’s comments were based on “a vendetta” because Spota had prosecuted allies of Bellone.

“I have absolutely no reason why I should resign or be removed from office,” Spota said.

The extraordinary news conferences came as federal investigators continued their probe into allegations of political and law enforcement corruption in Suffolk County.

Former county police Chief of Department James Burke, a Spota protégé whom Bellone appointed as the county’s top uniformed cop, pleaded guilty earlier this year to beating a burglary suspect and orchestrating a cover-up of the crime.

Former Sheriff’s Lt. Edward Walsh, who also was Suffolk Conservative Party chairman, was convicted in U.S. District Court of billing the county $200,000 for hours he didn’t work. A motion by federal prosecutors said Spota tried to thwart the investigation.

Bellone said he was spurred to call for Spota’s resignation after a story in Newsday Thursday about the district attorney’s investigation of Robert Macedonio, a politically connected defense attorney.

Throughout most of 2007, Suffolk investigators and prosecutors listened in on wiretaps as Macedonio plotted what they believed to be criminal activity with judges, gang members and various public officials, as well as drug traffickers funneling cocaine into Long Island high schools.

In some phone calls, Macedonio was overheard arranging cocaine purchases or tipping off clients to law-enforcement informants. In others, he discussed deals to launder campaign contributions or trade patronage jobs for judgeships.

According to several officials with knowledge of the investigation, most of the criminal activity went unpunished, Newsday reported.

Bellone said, “Today’s [Newsday] report, I think, gives a real insight into what has been happening here.”

Bellone continued, “You know, I have described what has been happening here as an operation. Today’s report suggests it’s more than that: that it’s a criminal enterprise, and it must be stopped.”

“It should be disregarded in its entirety,” he said.

Spota defended Macedonio’s guilty plea for felony cocaine possession, which was later vacated, and said his investigators and prosecutors had looked into the other allegations on the wiretap. Spota said his office had turned over boxes of documents and recordings of wiretaps to federal prosecutors under a subpoena.

Bellone ticked off a long list of what he said were failings by Spota, including the prosecutor’s support for Burke and Spota’s blocking of Suffolk police from cooperating with federal agents on the Gilgo Beach murders. Burke is awaiting sentencing.

“For allowing violent criminals to go free to protect political friends. For lying about Jim Burke and conspiring to conceal his past.

“. . . For violating your sacred oath and for using your position as the top law enforcement officer of this county. Tom Spota, you must resign from this office so that we can begin the process of reforming this place — governmentally and politically — in a way that will ensure that this doesn’t happen again.”

While Bellone was talking, Legis. Robert Trotta (R-Fort Solanga) shouted that Bellone was a “co-conspirator” with Spota for appointing Burke as chief of department. Bellone did not respond.

After the news conference, Bellone walked into the district attorney’s office with a letter asking Spota to resign. After a woman at the front desk said Spota was unavailable, Spota’s chief investigator, Frank Guidice, arrived to accept the letter.

A spokeswoman for the FBI in New York, Kelly Langmesser, declined to comment, as did Nellin McIntosh, a representative for federal prosecutors in the Eastern District.

Spota at his news conference lodged his own accusations against Bellone.

Spota also said Bellone tried to get him not to prosecute former Babylon Democratic Chairman Robert Stricoff, a childhood friend of Bellone’s. Spota has referred the Stricoff investigation to the state Board of Elections, which declined to comment Thursday.

Spota said Bellone’s demand for him to step down was “based on nothing but a personal vendetta against me for investigating and prosecuting people he is close to.”

Spota continued: “I’ve never said it before, but I will say it now: the county executive has made and did make, in the past, multiple personal pleas to me, in the presence of other prosecutors, not to investigate or prosecute people he was close to.

Bellone denied that he had sought favors for anyone, and insisted that his dispute with the prosecutor was not personal.

“This is not Steve Bellone versus Tom Spota. This is about the culture of corruption and what we have to do moving forward to restore justice and democracy in this county . . . ” Bellone said, noting that officials including Sheriff Vincent DeMarco and lawmakers have called for Spota to resign.

Also Thursday, sources familiar with the relationship between federal law enforcement officials and Spota and Burke said the local officials have declined to cooperate with the FBI and federal prosecutors on some key criminal investigations.

The Suffolk police, for example, pulled a number of detectives from joint federal task forces, such as the one on Long Island gangs, saying the police department could use the personnel more effectively in other areas.

In the case of Gilgo Beach, the Suffolk officials balked at calling for the FBI’s help for several months after December 2010 when the case was declared a serial killing with the discovery of the bodies of the first four victims. It wasn’t until April 2011 that the FBI was called for assistance.

According to a supplementary report obtained by Newsday Thursday and prepared by Suffolk detectives in December 2012, an FBI agent in the Behavioral Analysis Unit in Quantico, Virginia, “had agreed to respond to this office in December 2012 with his Behavioral Analysis Team to conduct a review of the eleven cases that are connected to this Gilgo Beach Investigation. The Suffolk County District Attorney’s Office was notified of this, and at that time, objected to this analysis being conducted. As a result of their objection, the Office of the Chief of Detectives advised that this analysis should not be conducted.”

Spota spokesman Robert Clifford said “the FBI Behavioral Analysis Unit was brought into the Gilgo Beach investigation for the first time in late 2010/early 2011. They were asked to return to Suffolk County on June 7, 2012, to deliver a confidential internal report outlining their perspective on the case. This included a review by the FBI Behavioral Analysis Unit of the investigation as it stood at that time including the multiple sets of remains discovered at the site.

“A request that the Behavioral Analysis Unit return for a third time was deemed duplicative of the work already completed. This was communicated to the Suffolk County Police Department on December 7, 2012.”

Police Commissioner Timothy Sini said the FBI analysis done so far has only been “preliminary and verbal.”

“There has not been a full behavioral analysis of the killer or killers related to the Gilgo Beach investigation,” Sini said, adding that the full profile should be completed soon.