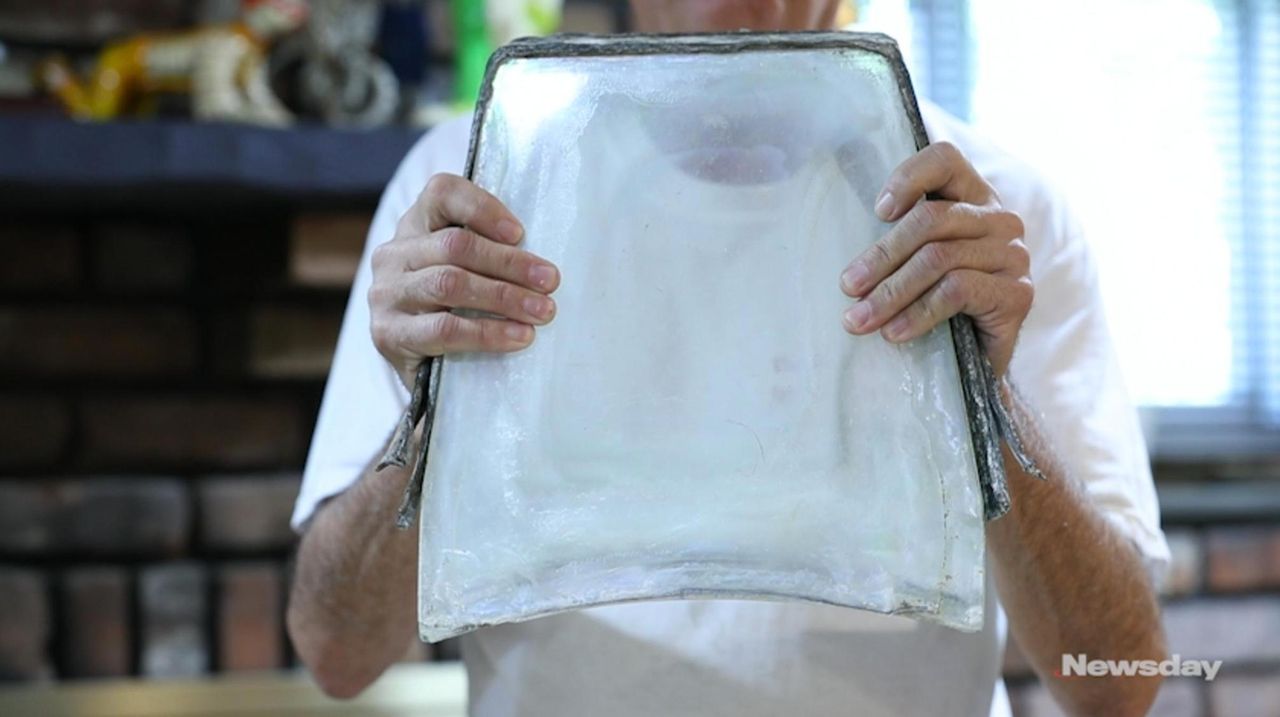 The wreck of the sole Thunderbolt prototype, one of World War II’s fiercest and fastest warplanes, which crashed into the Long Island Sound in 1942 shortly after taking off from Republic Airport, has been discovered in about 50 feet of water, diver Kirby Kurkomelis said. He found it while searching for two airmen who crashed in 1947, whose remains he was hired to find. Credit: Michael Owens

An underwater diver is revealing his accidental discovery of historic significance: He found the wreck of the sole Thunderbolt prototype, one of World War II's fiercest warplanes, in the Long Island Sound.

The Aug. 5, 1942, accident report for the XP-47B, declassified under a broader 2009 executive order, says the plane crashed off Eatons Neck shortly after taking off from Republic Airport. The pilot managed to bail out — and survived.

Diver Kirby Kurkomelis said in 2012 he first found parts of the warbird in about 50 feet of water while searching for the remains of two airmen who crashed in a military training plane in 1947.

“And we came upon a wreck; I had to go down to see what it was," he said. "That’s scuba diving, you’re looking for something, and you find something else.”

Pilot's children recall 'he had the 'it' factor'

Kurkomelis has kept his find secret, until now. Over the past six years he has worked on other projects while undertaking the necessary and time-consuming research, including obtaining records from the National Archives, to verify his discovery. He has returned to the site nearly two dozen times to recover more artifacts.

Kurkomelis, a Nassau County resident, declined to reveal the fighter-bomber’s specific location as he continues his research.

The Thunderbolt, designed and built at Republic in Farmingdale, foreshadowed modern fighters with its speed, heavy armor and armament, historians say. More Thunderbolts were built in World War II than any other U.S. warplane.

Ken Neubeck, author and vice president of the Long Island Republic Airport Historical Society, said that, judging by photographs of parts recovered from the plane, they appear to be from the Thunderbolt prototype, missing for more than 75 years.

“Oh, I’m pretty sure it is; there really weren’t many other planes that fell into the Sound that were an XP-47B,” he said. “It’s a very relevant piece of Long Island history.”

Joss Stoff, the curator at Garden City's Cradle of Aviation, who has compared the relics with the museum’s P-47, agreed with Neubeck's assessment.

“This is the granddaddy of all P-47s,” he said. Referring to Kurkomelis, Stoff said: “Some parts he showed us were definitely identifiable as P-47 parts,” including a rudder panel and an intake cover.

“The most interesting part that positively identified it — he found the bulletproof glass” from the windshield. “It’s a different shape from all other P-47s.”

At the time, Republic Aviation Corp., which created the Thunderbolt, was competing with other airplane makers for U.S. military contracts, including Long Island's Grumman Aircraft Engineering Corp., which itself lost a test plane in the Sound in 1941.

While both pilots survived the crashes, both pinned on turbocharger problems,   production of Grumman's XP-50 Skyrocket was canceled afterward though its design heralded the XF7F-1, the first World War II plane to land on carriers with tricycle landing gear, and the F7F Tigercat, which shot to fame in the Korean War.

"Those are the two most rare airplanes in the Long Island Sound," Stoff said. "Now one's been found, maybe the other will be."

Pilot 'had no choice but to let go'

The Thunderbolt’s civilian test pilot, Fillmore Litton Gilmer, at the time 31 and a Huntington resident, survived what Newsday reported was a “plunge almost straight downward, possibly faster than any plane has ever flown before.”

After climbing as high as 11,000 to 12,000 feet, Gilmer told Army Air Corps investigators the stick became “light and useless.” He smelled burning rubber, and realized heat from the turbo was burning the tail and melting the elevator rod, the accident report said.

The hub of the turbo supercharger was highly flammable magnesium, which likely sparked flames, historians say. That supercharger — part of which Kurkomelis found — is one reason this warbird was such a high-altitude star though it was a true heavyweight, thanks to its eight large machine guns and pilot-shielding armor plating.

By November 1942, demand for the “flying tank” led the United States to approve a second Thunderbolt factory in Evansville, Indiana, in addition to the one at Republic, which quadrupled in size, according to  “Aviation Darwinism — The Republic P-47 Thunderbolt,” on the Cradle of Aviation website.

That was just three months after the prototype went down. Gilmer, a former Navy lieutenant junior grade, told Air Corps investigators he was unable to power out of a 20- to 25-degree glide, adding his airspeed had reached 420 mph to 430 mph when he released the canopy.

“I gripped the after part of the canopy with my hands and hooked my right toe under the forward section of the windshield. I had no choice but to let go. I did not see the plane again after leaving it. I saw where it hit,” he said.

The Newsday article said that when Gilmer “pulled the rip cord, he heard a sound like a pistol shot and saw one complete triangle panel rip out and float away, a useless piece of silk. He had pulled the rip cord too soon.” Temporarily stunned on what was his first parachute jump, Gilmore landed in the water near the plane, it said.

A sailboat retrieved him and brought him ashore, the Eatons Neck Coast Guard told the investigators for the Air Corps, which preceded the Air Force.

“We shot ahead and had an ambulance down here waiting for him,” a Coast Guard officer said in the Newsday report. “He just had a few burns on his body from the chute cords, I guess. He’s walking around, he’s feeling good."

A buoy was placed over the wreck’s oil slick and debris, he added.

The accident report listed the Thunderbolt prototype as “a complete wreck.” Explained Stoff, it broke up when it hit the water because it was at “flying speed.”

The debris field Kurkomelis found is scattered; even the engine fell out, he said.

And much of the plane’s metal frame and parts have corroded in the salt water.

Another problem is that diving down to the warbird is both arduous and exceptionally dangerous.

“The Long Island Sound consists of very, very dark water in the last few feet; everything is basically by touch,” Kurkomelis said, explaining the sunlight blocking pollution also has turned the bottom into a treacherous and quicksand-like mud.

“You can get trapped there,” he warned. Divers also contend with strong currents.

His confidence that he has the ability, knowledge and training to handle the perilous dives in the Sound’s cold and dark depths, he says, partly explains what impels him.

“What motivates me the most," he said, "is the mysteries of our oceans and lost history.”

The Thunderbolt was designed and built by Republic Aviation, which succeeded the firm founded by Maj. Alexander de Seversky, a Czarist World War I naval ace.

Drawing from some of Seversky’s work, Republic’s lead designer, Alexander Kartveli – born in Tbilisi, Georgia, like Seversky – created the Thunderbolt.

It was a breakthrough fighting plane, soaring higher though rather slowly with its heavy armor and eight .50 caliber machine guns – but diving faster than almost all competitors.

It was nicknamed the “Jug,” historians agree, though they differ about the derivation. Was it because it looked like a whiskey jug or because its fuselage resembled a milk bottle? Or was its nickname shortened from “Juggernaut,” as some flyers died trying to pull out of training dives.

Initially, it was mocked by U.S. and British pilots who prized the Supermarine Spitfire’s speed and maneuverability. Sent out to escort bombers, however, pilots were won over by its ability to surprise enemy pilots flying at lower altitudes and strafe or bomb ground targets, from Nazi artillery to railroads.

The “Warthog,” vaunted for its ability to fell enemy troops with low-level machine gun, rocket and bomb attacks, was named the A-10 Thunderbolt II in honor its predecessor.

Blue Point native Gabrielle Petito 'loved that van life.' Now she's missing.
1:08
Marchers in Wyandanch: 'Drop the guns, save our sons'
Hochul: Slight decline in number of coronavirus hospitalizations
2:10
Police in Wyoming, Florida conduct separate searches for Gabrielle Petito, 'person of interest' fiance
If you see it, kill it: Why this pretty bug has experts sounding alarms
2:29
Workforce, middle-class homebuyers shut out on Shelter Island
Didn’t find what you were looking for?