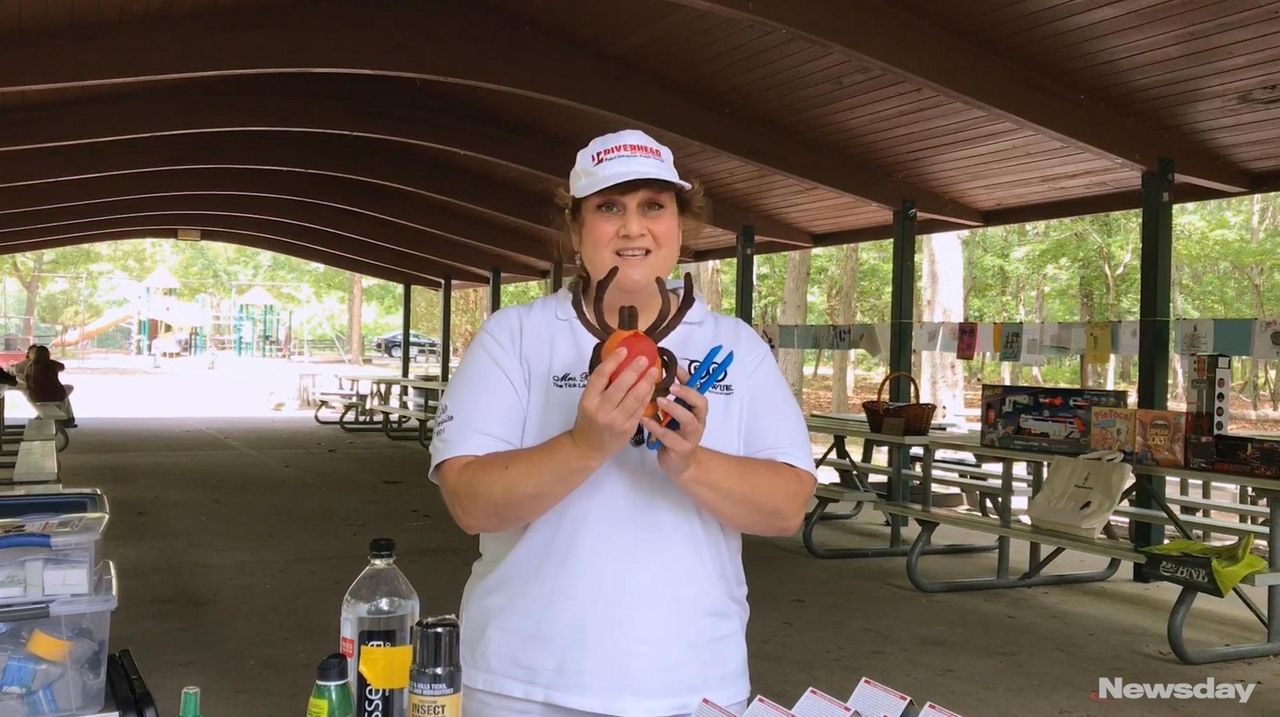 April Nill-Boitano, president of Tick Wise Education, a nonprofit organization based in East Quogue, shared tips about ticks -- how to avoid and remove them. Putting on presentations at area schools, she’s reached more than 3,000 students this year with her group's first Art Hike for Tick Bite Awareness. Credit: Newsday / Keshia Clukey

Visitors to Indian Island Park in Riverhead Sunday were greeted by educators and students raising awareness about a growing threat on Long Island — ticks.

Tick Wise Education, a nonprofit organization based in East Quogue that focuses on teaching children about ticks, hosted its first Art Hike for Tick Bite Awareness, sponsored by East End Tick and Mosquito Control, of Southampton. The event, which drew dozens throughout the afternoon, featured demonstrations on how to prevent tick bites, how to spot them, and how to properly remove ticks once they’ve become attached to the skin.

“You have to be aware of ticks and you can’t just be careless about it,” said Annika Pasquale, 11, of Manorville. “It’s dangerous.”

Annika was the grand prize winner of Tick Wise Education’s poster contest. Her entry and the other winning posters were displayed at Indian Island Park Sunday and will be on view in kiosks at parks across the county throughout the summer.

Ticks are an increasing problem in the Northeast, particularly on Long Island, which is considered ground zero for Lyme disease, the No. 1 tick-transmitted infection in the world, studies have shown.

Ticks carry a variety of illnesses, including babesiosis and anaplasmosis. And a large cluster of people on the East End have tested allergic to red meat, a condition that experts have attributed to bites from the Lone Star tick.

Brian Kelly, owner of East End Tick and Mosquito Control, has two children, 3 and 8 years old, whom he has taught to dress appropriately, and to identify and properly remove ticks, but he wanted to do more.

“We’re finding them everywhere. It’s not just in the woods anymore,” Kelly said about the tiny arachnids.

He hired April Nill-Boitano, the president of Tick Wise Education, to teach children about ticks. Putting on presentations at area schools, she’s reached more than 3,000 students so far this year , Kelly said.

Teacher Stacy Hubbard, whose fifth-grade class at Pulaski Street Elementary School in Riverhead was among those taught by Tick Wise, on Sunday said she learned a lot from the program. “I’ve lived here my whole life and I’ve been pulling them out the wrong way for years,” she said. And it was particularly relevant for her students, some of whom “had Lyme disease, or their parents couldn’t eat meat for a time, or they had other tick-borne diseases,” Hubbard said.

Manorville parent Adrienne Pasquale has two daughters who won prizes in the poster contest including Berlin, 13, who was bitten by a tick and had to be treated for Lyme disease, she said.

“It really hit close to home, her having gone through so much,” Pasquale said. “We’re so grateful for these classes. We realized we have a lot to learn.”

Source: Tick Wise Education. For more information and for a list of events visit tickwise.org.