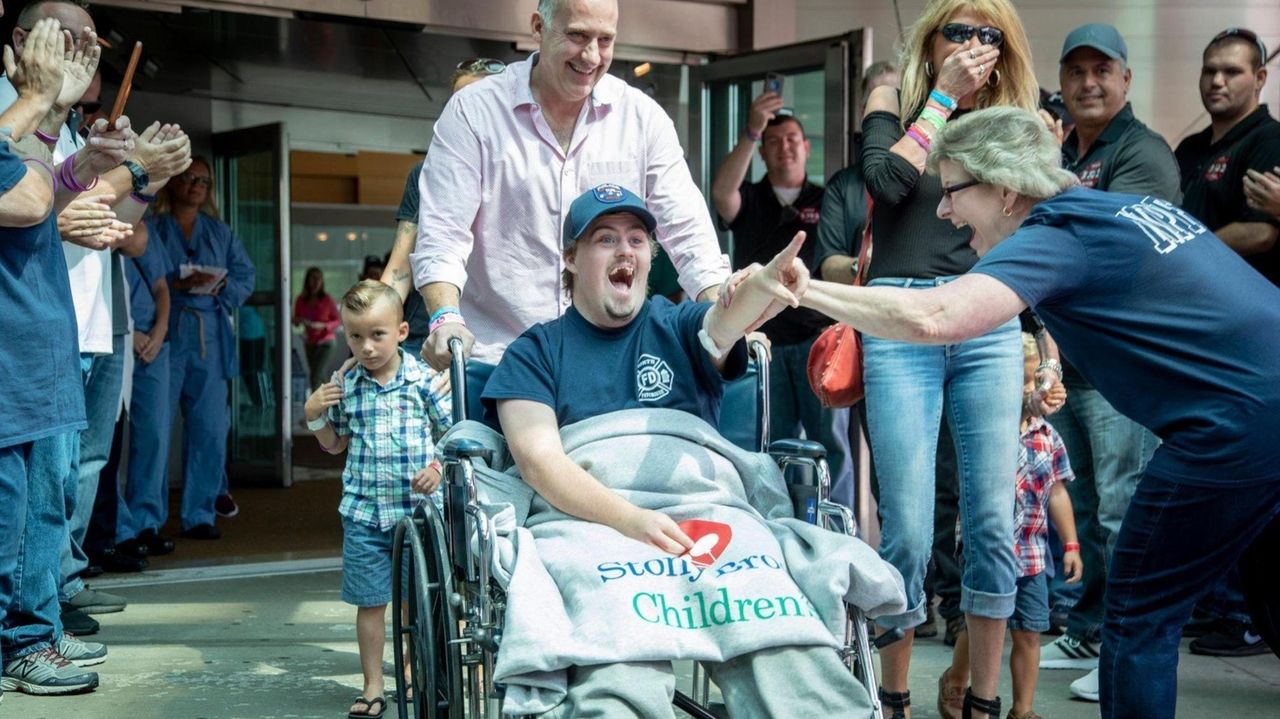 Thomas Spiotta is heading back for his senior year of high school after a month in Stony Brook Children's Hospital recovering from a rare surgery that called for removing a 3-foot section of his small intestine. Spiotta, who has Down syndrome, was given a sendoff from more than 50 firefighters who know his dad, who is an assistant chief at North Patchogue Fire Department. Credit: Newsday / Yeong-ung Yang

The surgeries were over, the life-threatening condition halted, and Tommy Spiotta headed out of Stony Brook Children's Hospital Tuesday — only to find a joyful surprise.

The East Patchogue 19-year-old — a fire department explorer and Special Olympics competitor — passed through the front doors of the hospital to applause and cheers from about 50 firefighters.

Suddenly, the young man — who was described by his parents as being a bit down moments before — burst into a smile, waving to the firefighters, calling out to them and returning their cheers with his own.

"I'm going back to the fire house today," Spiotta said. "I miss everybody."

The festive mood was hard-earned by the rising senior at Bellport High School. Spiotta had won his latest bout with a potentially lethal intestinal condition, but then again, he's always been a fighter.

Even before his birth, Spiotta faced challenges. His mother had been carrying him for 13 weeks when he was diagnosed with Down syndrome.  Always considered high functioning, Spiotta runs track in the local Special Olympics, loves hip-hop music and serves in the Explorer Program at the North Patchogue Fire Department.

He faced another challenge in early July, but this one put his life at risk. It started with an intense pain that gripped his midsection and wouldn't go away. Spiotta's parents took him to a hospital and he was eventually transferred to Stony Brook. Doctors there diagnosed him with a large blood clot in a major vein between his intestines and liver.

The condition, called portal venous thrombosis, can kill because it decreases the supply of blood to the intestines and can render intestinal tissue useless.

Within days, Spiotta's condition worsened to the point where the possibility of death was only hours away, said Dr. Christopher Muratore, chief of pediatric surgery at Stony Brook Children's Hospital.

The doctor sat down with the young patient's parents, Eugene and Jane Spiotta.

"We have no choice but to operate," Muratore said he told them of their son's prognosis. "He is in danger of dying."

Surgery soon followed and Muratore removed a 3-foot section of Tommy Spiotta's small intestine, damaged beyond repair due to the blood clot.

Eugene Spiotta, a first assistant chief with the North Patchogue Fire Department, put his life on hold to focus on what came next for his son. He called his aunt and asked her to take on the unenviable task of finding a burial plot for his son.

But the fighter in Tommy Spiotta emerged for another battle. Surgeons performed two additional operations to make sure blood pumped properly through the previously clotted vein and permanently reconnect the working intestine.

Over time, he started eating solid food again, including his favorite — cheeseburgers.

Tuesday morning, the hospital cleared a thinner but recovering Spiotta to go home. When he was a young boy, Spiotta's father had introduced him to the firehouse family and he grew to love and respect the firefighters who worked so closely with his dad. When he was wheeled out of the hospital, firefighters from North Patchogue and other area fire departments showed that the love and respect was mutual.

Eugene Spiotta said from the day Tommy was born, his colleagues were there for him and his wife. The roar of cheers and the rousing applause from firefighters Tuesday was just the latest example, he said.

"When I had my son 19 years ago they supported me," Eugene Spiotta said as he gathered with his fellow firefighters outside the hospital entrance, Tommy grinning and laughing nearby, "and now they were supporting my son."

Seven weeks in the hospital took a toll on the younger Spiotta. He lost 69 pounds and still doesn't want anyone to touch his wounds or change his dressings. He fears they will take him back to the operating room, his father said.

Both his parents have tried to explain Tommy Spiotta's illness to him.

Outside the hospital, Tommy Spiotta said he's looking forward to starting his senior year in high school. Soon after he left the place where he'd spent the past seven weeks, North Patchogue firefighters treated him to a ride home in a department fire truck.

At home, he said the plan was to have a good meal.