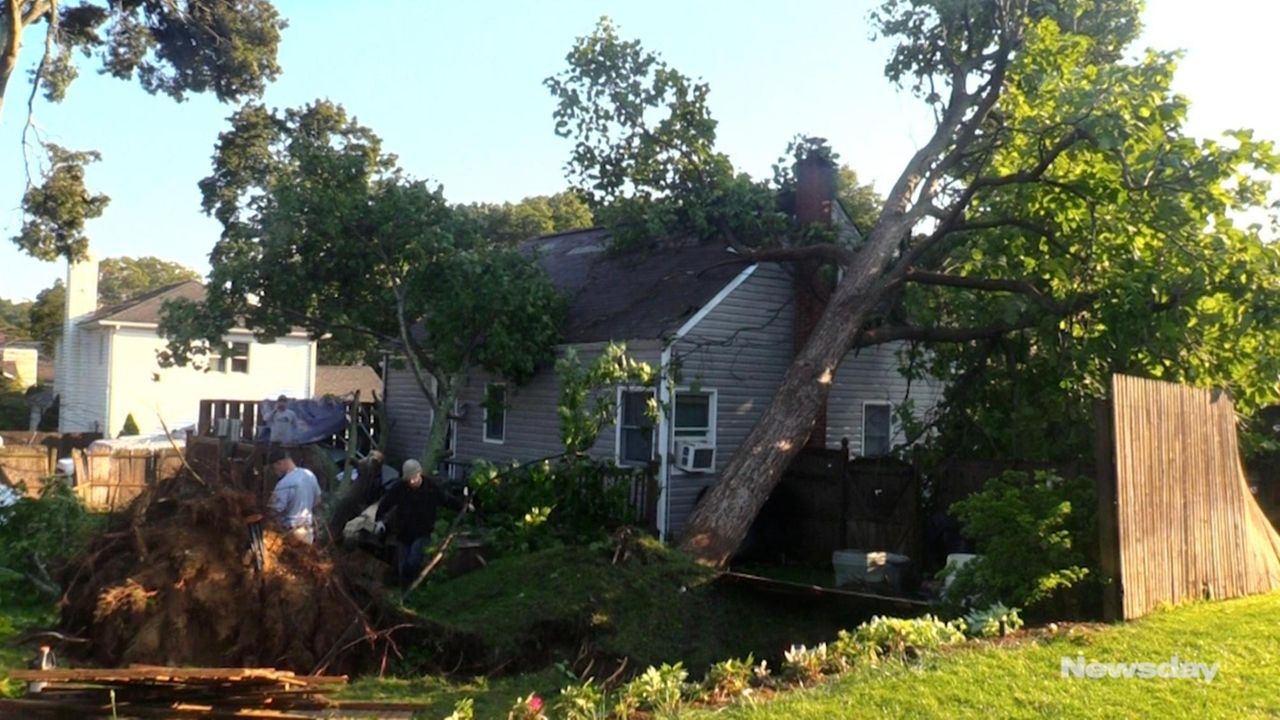 On Tuesday, an EF0 tornado, the lowest level grade with winds between 65 and 85 mph, touched down in a residential area of Ronkonkoma at 11:20 p.m., the Weather Service said. Dylan Neill of Ronkonkoma said "It could have been a lot worse." Credit: James Carbone

A tornado that "sounded like a freight train" hit a Ronkonkoma neighborhood late Tuesday, toppling trees onto homes and cars, and jolting unsuspecting residents.

The EF0 tornado, the lowest level grade, brought winds estimated at 85 mph when it touched down at 11:20 p.m. The twister lasted about 2 minutes and took a path 400 yards long and 200 yards wide, the National Weather Service said.

"There is quite a lot of damage," Ross Dickman, the meteorologist in charge of the weather service in Upton said at the scene, where multiple homes sustained damage to siding, gutters and outdoor furniture, due to the whipping winds and dozens of downed trees and branches. "Fortunately there were no injuries."

The tornado affected Mohican Avenue, and Iroquois, Seneca and Ontario streets, where on Wednesday morning branches covered parts of the streets. Neighbors worked alongside one another, sweeping debris, while others used chain saws to cut trees in their yards.

“I heard a lot of rain and then it sounded like a freight train coming down the neighborhood,” said Alana Klages, 57, who lives on Iroquois Street and was home with her husband and 17-year-old daughter. She was in a backroom office when the tornado hit as a line of thunderstorms moved through. A severe thunderstorm warning was in effect at the time.

Dylan Neill, who lives on Iroquois Street with his girlfriend and infant daughter, said he was worried when he heard "some loud noises" late Tuesday.

"We were actually in the basement and we hear all this," Neill said Wednesday morning. "First thing I am thinking is, 'What’s going to happen to the baby?' I was obviously concerned. I didn’t know if anything was coming through the house."

It turns out a tree had struck the home.

"We are lucky," Neill said. "It could have been a lot worse."

Sal Cavallaro, 29, who also lives on Iroquois Street, said the mayhem came and went in a matter of minutes.

Cavallaro said he looked through a back window and noticed "our shed had come apart and was kind of floating in the backyard."

The weather service determined Wednesday that four tornadoes touched down in the region on Tuesday, but no one was killed or injured in any of them.

About seven hours before Ronkonkoma got hit a stronger tornado, an EF1 with estimated maximum wind speeds of 100 mph, hit Stony Point in Rockland County. That one, which began in Harriman State Park west of the Palisades Parkway, uprooted and downed trees. It lasted 5 minutes and went on for 1 mile, forecasters said.

Another tornado, also an EF1, but with estimated winds of 110 mph, touched down at 4:47 p.m. in New Castle in Westchester County. That tornado was 300 yards wide and traveled for 3.75 miles. It lasted 9 minutes.

A fourth confirmed tornado, also an EF1, hit a 3.9-mile stretch from New Canaan to Norwalk in Connecticut at 5:29 p.m. The twister was 100 yards wide.

The last time a tornado struck Long Island was more than two years ago.

On Aug. 10, 2016, a weak, short-lived tornado hit Mattituck. The wind damage was confined mainly to trees, several of which snapped in half, the Weather Service said at the time.

On that date four years earlier, a twister touched down in Great River, then spun north into Connetquot River State Park, Bohemia and Ronkonkoma. Most of the damage took place in Bohemia, where trees were thrown into power lines, homes and cars.

Before the 2012 event, there had been only eight confirmed tornadoes in Nassau County and 22 in Suffolk County from 1950 to 2015, according to weather service records.

Dickman said tornadoes on Long Island in October are extremely rare. But the conditions needed to form a tornado — severe thunderstorms, variations in wind velocity, moisture in the air and strong winds in the upper atmosphere — were all present Tuesday night, he said.

"All the ingredients, at least for two minutes, came together," Dickman said.

Islip Supervisor Angie Carpenter said she deployed town personnel, including staff from the Department or Public Works, to the neighborhood early Wednesday. Carpenter said the cleanup would take about a week, but it’s too early to determine a financial estimate.

“I’m just so very, very grateful that no one got hurt,” Carpenter said. “It really is a miracle. As awful as the damage is that some of these homeowners have sustained, not just to their homes but to their vehicles, you just have to be so grateful.”

“All in all, we got very lucky," Klages said. "It could have been 100 times worse. There was no catastrophic death. My house is still standing. That is all that matters. We are all good.”

Tornadoes are classified into categories based on the Enhanced Fujita scale

How can LI prepare for tornadoes?For Long Islanders wondering how to protect their homes after a tornado touched down in ... Forecast: Dry day after storm causes damageA thunderstorm pelted Long Island with heavy winds and torrential rain overnight and caused scattered ...