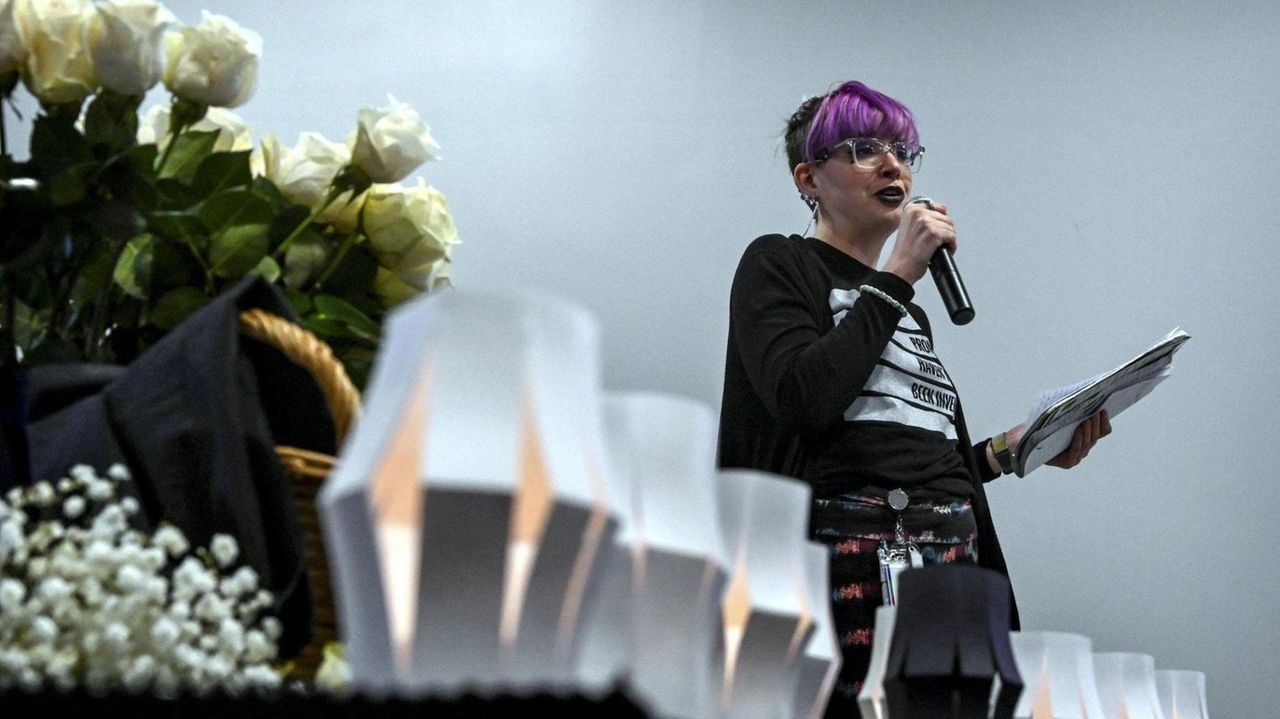 The local Transgender Day of Remembrance memorial was held at the LGBT Network offices in Hauppauge on Wednesday evening, a solemn event in honor of murdered and missing trans members. Credit: Newsday / Shelby Knowles

Thirty people in the transgender community have been murdered this year in the United States, which represents an “epidemic,” a community advocate said.

“People are getting murdered for existing,” Aaron Braun said. “It breaks my heart. ... It’s really transgender women of color. They are the number one target for homicide.”

Braun, 29, of Island Park, is a community educator with the nonprofit LGBT Network in Hauppauge that hosted the Transgender Day of Remembrance Wednesday night. About 45 people attended what the organization described as solemn event recognizing 22 transgender homicide victims this year who have been identified by their names, 20 of whom are transgendered women of color, officials said. Another eight people in the community have been killed but haven’t been identified by name, Braun said.

The room where the event was held was decorated with the transgender flag bearing stripes in light blue, pink and white. Attendees wrote on either blue or pink sticky notes, actions that made them feel safe on pink notes, or actions that made them feel unsafe on blue notes. Those notes were stuck on two posters with the names of the transgender homicide victims in 2019.

One pink card read: “I feel safe when people ask me for my pronouns.” A blue note expressed someone felt unsafe, “when people of power debate the validity of my gender identity.”

At the event, attendees spoke about their experiences. Some shared feelings of loneliness, being bullied or having their families turn their backs on them. Others shared stories of when they were supported by others in the transgender community or by allies.

Mitch Hymowitz, 27, of Island Park, identifies as a transgender man. He said Wednesday’s day of remembrance was important because it honored victims of homicides “so they are not forgotten.”

He added it also is critical the transgender community keep advocating for each other.

Tamara Layne, 55, of Bohemia, identifies as a transgender woman. She told the crowd “there will always be hatred“ against certain groups, whether it’s because of religion, race or nationality. But Layne garnered applause when she said it’s up to the transgender community to take the high road.

“We are a community that unfortunately is living with a bull's-eye,” Layne said. “We just need to set the example even though people don’t respect us. It doesn’t matter — we still respect them. You still say ‘thank you.’ You still love on them.”