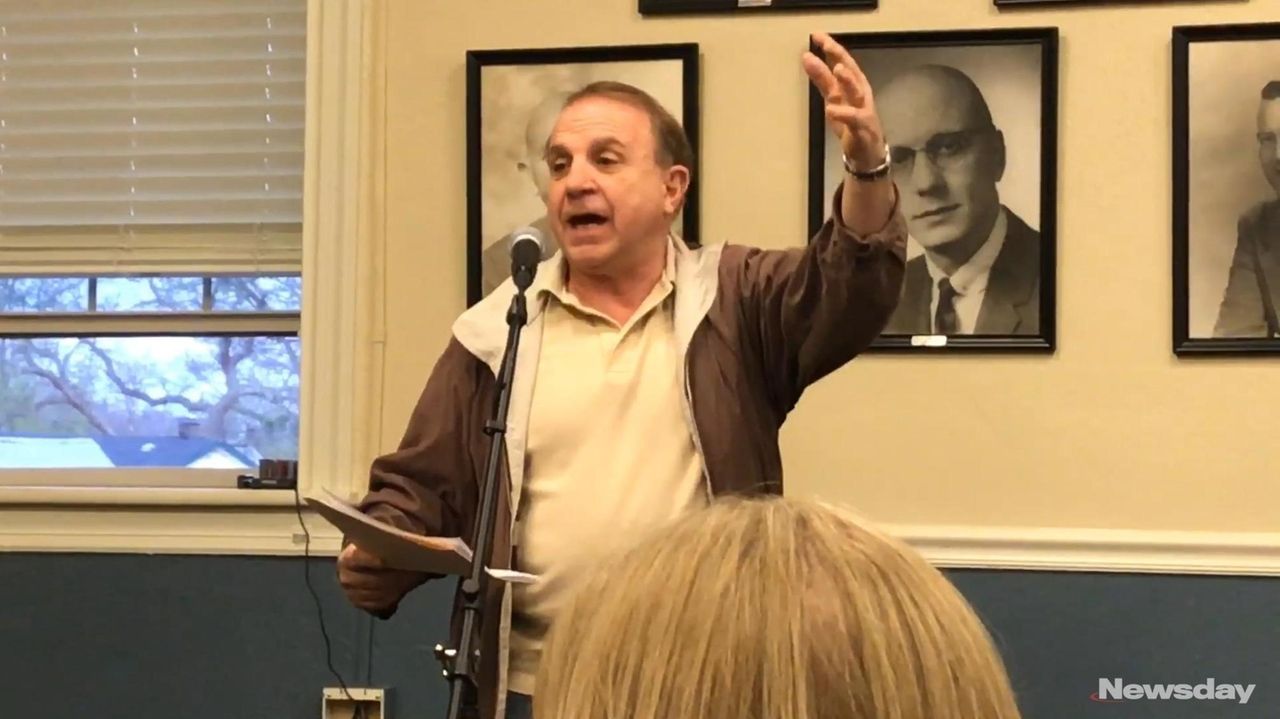 Lindenhurst resident Denis Garbo speaks against rezoning for Tritec apartment complex during a Village of Lindenhurst board of trustees meeting on May 1.  Credit: Newsday / Denise M. Bonilla

The Lindenhurst Village Board of Trustees on Tuesday approved what will be the village’s largest apartment complex, as residents demanded a public vote on the project.

Board members voted 4-0 to rezone a 7-acre parcel on East Hoffman Avenue near the Lindenhurst Long Island Rail Road station from industrial and residential to Downtown Redevelopment District. Mayor Mike Lavorata was not at the meeting because of a family illness, Deputy Mayor Maryann Weckerle said. But Lavorata expressed his support for the project in a letter that was read aloud at the meeting attended by about 50 people.

The Downtown Redevelopment District was created last year to address the village’s lack of multiresidential zoning after Tritec Real Estate of East Setauket proposed building a 260-unit multifamily rental complex on the site.

Some residents have said the complex is too big, too dense and lacks adequate parking. Several of them at Tuesday’s meeting pushed officials to hold a public referendum.

“When there’s rezoning, there’s got to be a village voice, we have to be able to say yes or no,” said Fred Schiffer.

“We know that if this goes, there’s going to be more to come,” said Denis Garbo. “This decision is so monumental that it shouldn’t be handled by five people, no matter how well-intentioned you may be.”

Trustees said that the site is private property and that rezoning does not require a referendum. “We’re elected to make those decisions,” Weckerle said.

Residents also pressured officials about a tax abatement Tritec is expected to pursue from the Babylon Town Industrial Development Agency. Agency chief executive Matthew McDonough said IDA officials have been in contact with Tritec but have not received an application. Any tax break requires a public hearing.

The village’s rezoning approval includes 31 covenants, one of which states that Tritec will pay the existing village taxes on the property — $37,000 — for five years. This includes the time when the land will be vacant and have a lower assessment, said village attorney Gerard Glass. He said Tritec also will pay the village an additional 2 percent of the taxes for the first five years. After that, Tritec will increase the amount of village taxes paid on the built-out property by 20 percent annually for the next five years. Another covenant assures the village a 1 percent building permit fee of $549,000.

Conor Hartnett, who owns Mary Carroll’s pubs in Babylon Village and Huntington and is about to open a restaurant in downtown Lindenhurst, said the project will be a boon for the village’s lagging downtown.

“I’m hearing from a lot of business people,” he told the board. “There’s a huge interest primarily because of Tritec.”