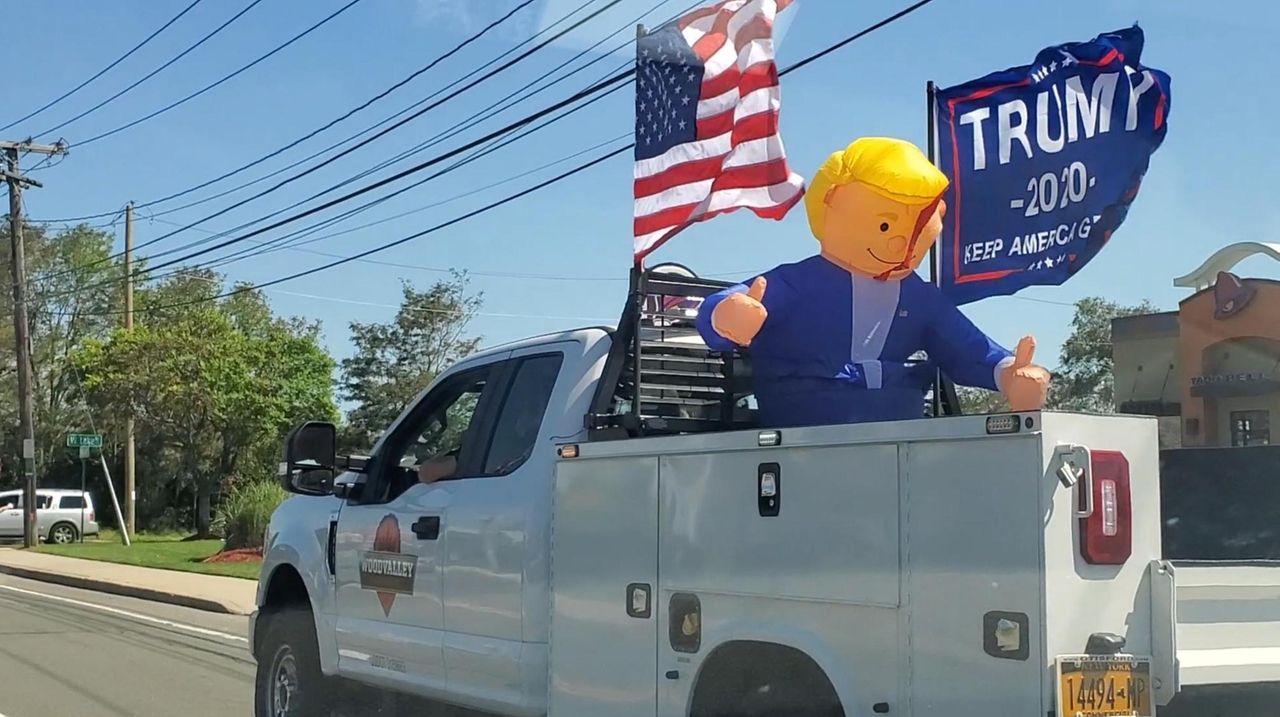 A car parade in support of President Trump was held on Sunday from Copiague to Patchogue. It then continued on to Shirley. Credit: James Carbone

A parade of President Donald Trump supporters rolled from Copiague to Shirley Sunday afternoon as an event dubbed “MAGA-Gras” took to Montauk Highway.

Dozens of classic cars, Trump flag-bearing pickup trucks and other vehicles lined up in a Copiague shopping center parking lot before the caravan headed east to Patchogue and then on to Smith Point County Park in Shirley.

Sunday’s parade, held 59 days before the Nov. 3 election when Trump faces off against Democratic nominee Joe Biden, was one of several pro-Trump events held on and around Long Island in recent weeks.

Images of the president — from an inflatable Trump to flags featuring him dressed as the movie character Rambo — abounded on decals, T-shirts and flags, making the gathering feel more like a sporting event tailgate than a political campaign rally.

“It really makes you proud to be an American,” Ludwig Konrad of West Babylon, a German immigrant who became an American citizen at the age of 16, said of the rally. “It brought everybody together. It was nice to see other people having a good time and supporting the President.”

The event was organized through Facebook by 29-year-old Shawn Farash of West Babylon. The first-time rally organizer said he was surprised by the turnout which he estimated at 100 to 200 people.

Kacey and Dave Lipski of Dix Hills, who founded their own social media platform ourfreedombook.com, said they came to the event to support the president.

“He loves our country, he loves our vets, he loves our police, he loves us,” said Kacey Lipski, 52, who wore blue leggings displaying the phrase Make American Great Again. “He’s doing everything possible to make this country better.. ”

The event also drew a trio of counterprotesters who displayed the Black Lives Matter symbol and conversed with Trump supporters. The president in July called the logo a “symbol of hate” after New York City painted it on Fifth Avenue. One decal on a truck at the event read “Donald Trump Matters 2020.”

“We just want them to know we’re here too,” added 38-year-old Jason Koza, also of Copiague.