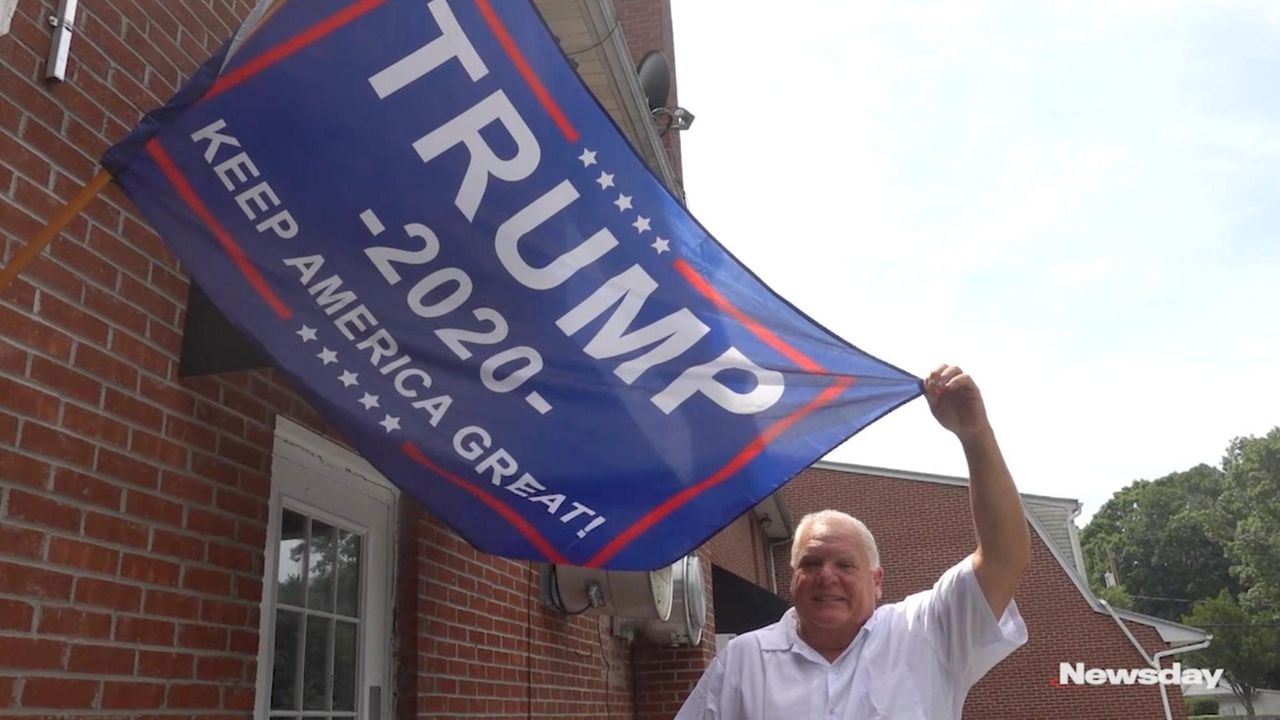 Guy Caligiuri, the owner of Patio Pizza, spoke to Newsday on Thursday about President Donald Trump's tweet showing support for his pizzeria after Caligiuri said a customer threatened to boycott the St. James eatery for flying a Trump 2020 flag. Credit: Debbie Egan-Chin

A St. James pizzeria got a Twitter shoutout Thursday from President Donald Trump's account after the proprietor appeared on Fox News to say that a customer had threatened to generate a boycott of the restaurant because it displayed a Trump 2020 flag.

The tweet came between posts extending condolences over Herman Cain's coronavirus death and a lament that "Big Pharma (Drug Companies) are advertising against me like crazy."

For years, Trump has been known to watch cable television, including CNN, MSNBC and Fox News, and live-tweet his reaction.

In the St. James man's interview Thursday on Fox News that caught the president's attention, Caligiuri told Varney that on Friday night a customer came into his pizzeria to pick up an order and asked an employee working the counter who owned the blue "TRUMP -2020- KEEP AMERICA GREAT" flag hanging out back.

Later, he said, he learned from friends that she had followed through on her threat.

The controversy is chronicled on the Setauket Patriots' Facebook page, though neither the woman nor her group's original posts could be independently located as of Thursday afternoon.

"She saw a flag in the back. She thought it was her right to say nasty things about me online and try to boycott my business. The people in St. James said, 'No, you are not — you are not doing that to this man,'" Caligiuri recalled in an interview later Thursday with Newsday.

"And it's just … snowballed ever since. And Fox got a hold of it, and I did an interview with them this morning, and I was fortunate enough to get a tweet from the president of the United States, who I support unbelievably."

Caligiuri has been in business for 43 years.

In a 2015 letter to the editor published in Newsday, Caligiuri wrote that small businesses like his are being unfairly targeted by the state and federal government.

"We are being targeted and taxed to the point where it's difficult to stay in business. In all seriousness, it's like the KGB," the letter said.

On Thursday, about 76,000 people clicked "like" on the Trump tweet, and there were about as many retweets as comments, about 25,000 each, some praising Trump, others accusing Trump of unethical conduct for promoting the pizzeria.

Caligiuri told Newsday: “The phones have been ringing nonstop since 10:15 this morning. I hope we can handle the business.”