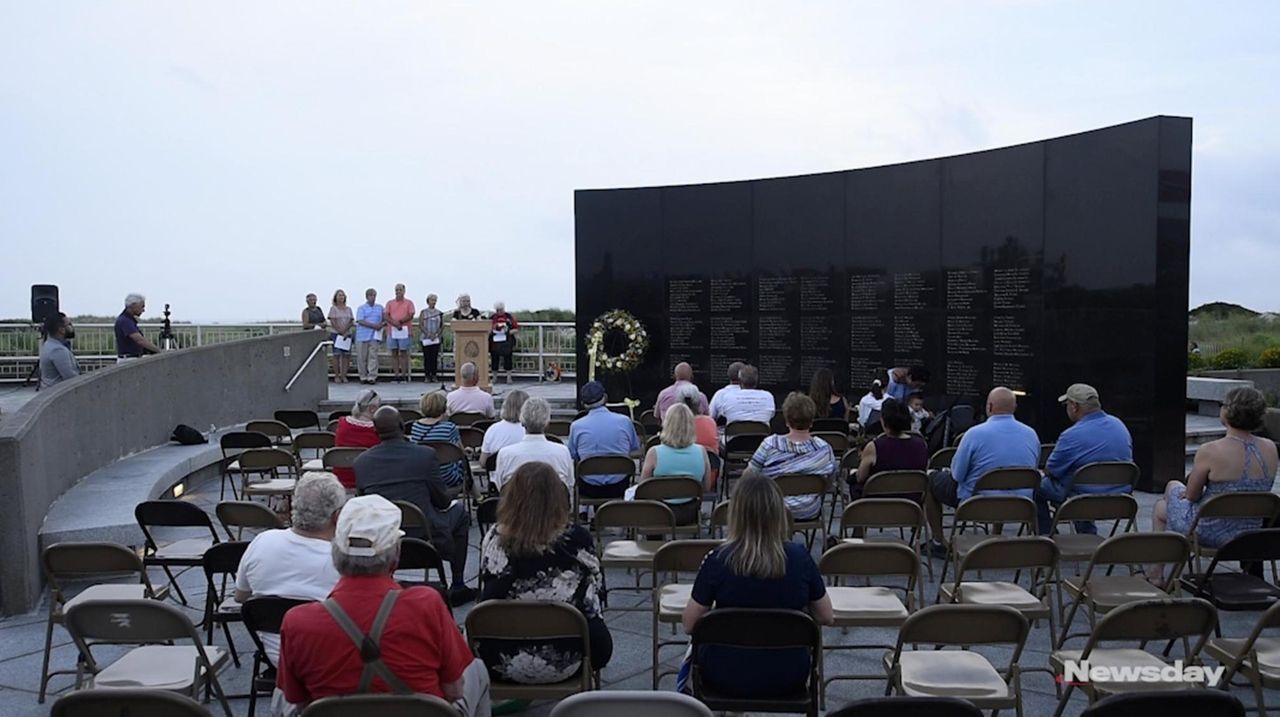 Family and friends gathered to honor the victims of TWA Flight 800 at a ceremony at Smith Point County Park, 23 years after an explosion sent the plane plunging to the sea, killing all on board. Credit: Johnny Milano

It’s been 23 years since the 230 passengers and crew of TWA Flight 800 died when the aircraft exploded and plunged to the sea south of East Moriches.

In the years since the crash, family and friends of those aboard the doomed Boeing 747-100 have made the mournful trek to Smith Point County Park on the east end of Fire Island to remember those lost.

Wednesday night, those forced to live without the fathers and mothers, sisters and brothers as well as friends, returned to the park to mark the time and date everything changed: 8:31 p.m., July 17, 1996.

“I show up every year to pay my respects,” said Mary Glander, after a ceremony at the TWA Flight 800 Memorial at the oceanfront park.

Glander, of Patchogue, said she worked for TWA for 30 years and knew some of the crew who died.

“Each one of them has a story,” Glander said as she recalled her colleagues.

The annual event marks the moment when an explosion took down the Paris-bound plane minutes after it left JFK Airport and doomed every soul on board. The memorial service honors the victims.

Flight 800 had climbed to approximately 13,800 feet when federal aviation officials lost radar contact, just as witnesses on the South Shore reported seeing a bright fireball light up the darkening sky.

The jet, bound from New York to Rome with a stopover in Paris, exploded and crashed into the Atlantic 12 minutes after takeoff.

It was the jet's reconstructed fuselage — called "jetosaurus rex" by some of those who built it — that played a key role in helping investigators determine the cause of the crash: a fuel-tank explosion likely caused by a wiring problem in the center tank.

The reconstruction also helped investigators rule out the theory advanced by some that the plane had been brought down by a missile.

Under threatening skies Wednesday night, eight relatives and friends of the victims read their names off while as many as 50 people watched — all facing a curved, granite wall with the names of the dead engraved.

The memorial, with its benches and blocks of granite, was built at the closest shore point to the crash site 10 miles south of Moriches Inlet. The coal-colored wall contains the names of the victims on one side. On the other, a drawing of churning waves and a flock of seagulls emerging to fly off into the distance.

“It’s a simple, heartfelt ceremony,” said John Seaman, chairman of the Families of Flight TWA 800 Association, who lost his 19-year-old niece, Michelle, on the flight.

Patricia Rogers of Northport, a former TWA employee, said she comes to the memorial service every year “to honor everyone and represent all of us, especially those who can’t be here.”

She said she was introduced to her husband by Constance and Jacques Charbonnier, a couple who perished on the flight.

Frank Lombardi, executive director of the Independent Group Home Living, which maintains upkeep for the memorial, read aloud a narrative of the flight from the moment it left the tarmac to the rescue efforts, a task he has performed for many years.

“I’ve been here since the beginning,” he said after the event, as attendees cast white carnations into the sea. “This place means a lot to me.”

Archive: The crash of TWA Flight 800On the evening of July 17,1996, 230 people (originally reported as 229) perished as a TWA jet bound for Paris exploded shortly after taking off from Kennedy Airport, raining debris over the Atlantic Ocean south of Moriches Inlet on Long Island. In 1997, Newsday won a Pulitzer Prize for spot news reporting on the crash, and rescue and salvage efforts. Loved ones mark TWA Flight 800 crash anniversayNot even torrential rain and thunder could keep Nancy Timerell from honoring the memory of her brother, who was killed in the TWA Flight 800 crash 22 years ago. TWA Flight 800 victim's dad sees advocacy pay offJames Hurd Jr. has testified on Capitol Hill, pushing for changes to aircraft to prevent fuel tank explosions like the one believed to have caused the downing of Flight 800, TWA Flight 800: LIers still haunted by its legacy On a sticky summer evening 20 years ago, Trans World Airlines Flight 800, carrying 230 people, climbed south from Kennedy Airport, then turned east for Europe.